NHS Providers, NHS Employers and The Shelford Group, under the umbrella of the Cavendish Coalition, have published the views of NHS trusts about the impact of Brexit on staffing leading up the outlined agreement between the UK and the EU on citizen’s rights in December.

Since the referendum result, the Coalition has been tracking the views of NHS trusts about how the UK’s withdrawal from the European Union will affect their ability to hire and retain staff through its quarterly Brexit impact survey.

An infographic published today, which records feedback up until June 2017 highlights a growing concern that Brexit will have a negative impact on their ability to hire staff.

The group have conducted four surveys since the referendum result in June 2016 and will be continuing to run these surveys throughout 2018.

An infographic published today, which records feedback up until June 2017 highlights a growing concern that Brexit will have a negative impact on their ability to hire staff. More NHS trusts are also changing their recruitment plans to meet their workforce supply needs.

However, since the most recent set of data, the UK and the EU have reached an outline agreement on the future of EU citizens rights published in December. The agreement in principle means that EU citizens living lawfully in the UK by 29 March 2019 will be able to stay with broadly the same level of rights and benefits they currently have.

The Cavendish Coalition has welcomed the outlined agreement as an important step in addressing the uncertainty of NHS trusts in its ability to continue to recruit from and retain staff from the EU. 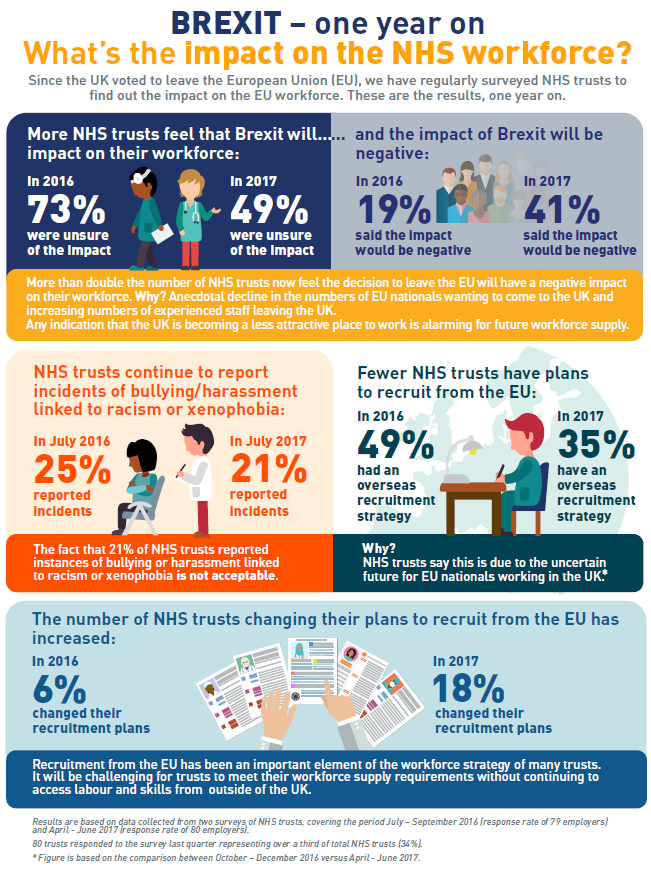 The next set of results will be important in determining whether this outline agreement between the UK and the EU has given NHS employers more confidence in the government’s strategy to ensure the availability of staff from the European Union.

The Cavendish Coalition will publish these results in March 2017.

The Cavendish Coalition is a group of 37 social care and health organisations working to ensure the system is properly staffed after the UK leaves the EU.

Andrew Ridley, chair of the Community Network, responds to the King's Fund report 'A year like no other'.

The case for capital funding

Saffron Cordery discusses ahead of the government's comprehensive spending review the need for the NHS estate to get the right funding to ensure it is fit for the 21st century.

Saffron Cordery comments on NHS Providers' new briefing 'Rebuilding our NHS: The case for capital funding', highlighting the need for the NHS estate to be fit for the 21st century.