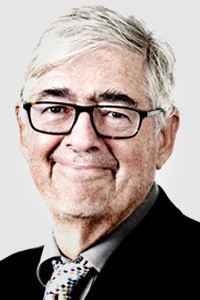 Emergency care is the crisis for the NHS at the moment. The crisis is an 80-year-old woman – Mrs Jones – who at 5pm on a Friday afternoon loses her breath. The obvious thing about someone being at home and being in a bit of a crisis is that services should deal with her at home. However, for nearly everybody in that situation, the way we’ve structured the relationship between the NHS and the public is that there is one real place of safety for that older lady and that is a hospital.

We have created in the public eye a single place of safety, and that place of safety is actually one that contains an enormous amount of anxiety – where our 80-year-old patient would love to stay at home but it’s almost the last thing on her mind when she’s taken ill. The place she’d like to be – the place we’d like her to be – is actually the least likely place she’s going to end up.

We’ve built an NHS system around hospitals as the only place you can feel completely safe and we’ve done that because the hospital is the place where you can be covered for everything.

If we’d got a system for the diseases of today, we’d create a place of safety around Mrs Jones’s home. There would not just be the current community service - there would be emergency community services. This is the direction where I think the long term plan is moving, in that it would say "we need this old lady and her daughter to be completely safe with services being provided in her home". At the moment, she wouldn’t be – she couldn’t trust them to be there to make her feel safe, and that’s because we’ve not constructed community services in that way.

The idea of the long term plan is very much to get community services into a place where they can provide this care 24 hours a day, seven days a week. The staff that we have that are providing community services at present are staff that are good at domiciliary care, and are not used to providing a place of safety. Even in residential care, people are being taken to hospital because the staff don’t feel they can create a place of safety.

So the contemporary problem is that we’ve got to create places of safety, where people feel safe and staff are themselves providing that safety in the home. That’s a different job for district nurses from what they’ve had before. Their job has in a sense been to pick up the pieces from the hospital but not to say "what are we doing here to keep people from going into hospital?".

The idea of the long term plan is very much to get community services into a place where they can provide this care 24 hours a day, seven days a week.

Acute care in the home

The long term plan in itself achieves nothing – the likelihood of succeeding in the area I’m talking about, which is acute care in the home, is quite high because if it doesn’t succeed the NHS will be in a really bad place. Unless the health service can, in the next five to ten years, create thousands of places of safety in people’s homes, the hospital system will fall over.

I’ve spent some time over the last three years working with the multispecialty community providers. Two years ago, in Whitstable, a GP started working with ambulance staff to persuade them they had the competency, with backup from a GP, to provide care at home. If two people in ambulance greens turn up, give Mrs Jones some oxygen and say "provided we can get someone round to sit with you I think you’ll be ok", she will feel pretty good about it. We’ve got around the country bits and pieces of this. What we’ve not got is a national system which can say to every part of the country "this is what needs to be done".

Because this is the crisis that the NHS is facing, everybody is trying to deal with it, so everybody is trying to do bits and pieces of bringing this together. However, if you’re a commissioner and you want to commission a safe, urgent care service that will keep people at home and away from hospital, you put an advert in the papers – but there’s no one providing it, it doesn’t exist. There will be new forms of community service –new forms of integration with other services. To create that 'safety', you’re going to have new forms of integration with ambulance services and local government, but the people who are going to do this are the people who are actually providing integrated care - not talking about it.

The long term plan in itself achieves nothing – the likelihood of succeeding in the area I’m talking about, which is acute care in the home, is quite high because if it doesn’t succeed the NHS will be in a really bad place.

The interesting thing is, as the purchaser provider split gets squished, if you’re running a hospital that’s under a lot of stress, you’ll probably be buying this service because you’re the one with the crisis. You will need to incentivise people to provide a service which stops people going into your hospital. That’s a problem, because you don’t know much about community health services – all you know about is hospitals – but more and more hospitals are reaching out to begin to take this on.

If I was running a community health services provider, I would be looking at the emergency care problems in my local hospital. I’d have some idea of the needs of older people in my community and I’d go to the hospital and say "for this sum of money, we can between us identify all the Mrs Joneses – the people with long-term conditions –and I will construct a service which keeps the younger Mrs Joneses out of your hospital. This is what it will cost". Now, is that the right way of doing it? Should the CCG be doing it? The CCG should be doing it, but they’re not going to.

All the people I know who are in this situation in hospital do not trust the capacity of community services to stop people coming into hospital. They’ve been promised it for the last decade and it’s never happened. If you’re running an emergency service in an acute hospital and you’d listened to what the NHS had said over the last few years, you’d have been sacking accident and emergency doctors and you’d be in big trouble because you’d have been taking seriously the promises that were made to you. If you’d read any sustainability and transformation plan and you’d taken it seriously, and you were running a hospital, you would have been sacking your staff. So actually, what I’m suggesting is that institutions that feel the pain do this themselves, because they don’t trust anyone else to do it – there’s a very understandable lack of trust.

You grab the attention of the policy makers by solving their problem. Their problem is too many older people in emergency beds in hospital. Community health services are very well placed to solve this problem. At the moment, no one trusts community health services to do it because no one has done it before. No one has solved that problem and we’ve gone on having a big increase in the numbers of people going into emergency beds. It seems to me you grab policy makers’ attention by doing something that is significant. I think it’s entirely feasible to do that at the moment, given that the big crisis for the NHS is pressure on emergency beds.

Existing organisations are going to have to work very differently together. Some community services are already linked up with others. Not many are already linked up with the most crucial services, which are GP services. That is probably one of the biggest problems – community services need to be linked up with GP services and social care services. If you are an 80-year-old woman with three long-term conditions and you’ve got some social care provision, the number of human beings looking after you is enormous and they are usually coming from very different organisations. It’s just chaos and that’s the norm. This is the median patient in 2019, so we’ve constructed a system that is chaotic for the median patient. There is a necessity for all of these organisations to work better together.

Existing organisations are going to have to work very differently together.

However, we cut these organisations up – we’ve got to find much better ways of working together around person-centred care. The problem with hospitals is they’ve got walls, and the walls define the institution. The walls of the community are loads of people’s homes, so community services have a better chance of working with other organisations.

We’ve got a crisis which isn’t just a crisis for the NHS - it’s a crisis for older people. We have people losing their independence sooner than they should because the only way in which we deal with this is via hospital. The long term plan recognises the scale of the crisis, but it’s a crisis that will get worse every year until we do something about it. In 10 years’ time, at the end of the long term plan period, if nothing has been done about it, it will become an acute crisis.

Five years ago, National Voices did a lot of work on how we talk about integration to the public – the ‘I’ statements narrative for person-centred care is fantastic. Community health service staff are so much at the core of that process of defining what person-centred coordinated care is, that they could be playing a much bigger role than they are in lots of cases, in constructing integrated care.

If we found a way of empowering community health nurses to be much more active in the process of integration and person-centred care, I think it would be better than the way we’re doing it at the moment. This is not about policy – it’s about practice. Locally, if you’re trying to integrate services, doing that through community services is likely to lead to more success than just doing it without.

Paul Corrigan CBE is the former health policy adviser to Tony Blair and former special adviser to Alan Milburn and John Reid. Between 2007 and 2009, Paul was the director of strategy and commissioning at the London Strategic Health Authority.

The fourth report in our series shares the perspectives of trust and wider system leaders on some of the critical issues facing health and care services today.