Understanding cancer performance in the NHS

Cancer is one of the leading causes of mortality in the UK. Research suggests that someone in the UK is diagnosed with the disease every two minutes and half of the population born after 1960 will be diagnosed with cancer during their lifetime. Although data indicates that survival rates are continually improving, the UK is still lagging behind other comparable European countries. Delivering timely diagnosis and access to treatment is essential for ensuring that patients have better health outcomes and increased survival rates.

Cancer waiting times are a key performance measure and many aspects of the cancer pathway are currently covered by a number of different national standards set out in the NHS constitution. Since their introduction in 2009, the waiting times targets were consistently met nationally for the first five years. However, since 2014 performance has started to deteriorate, and recent data for the first quarter of 2018/19 indicates that performance has now reached an all time low. The latest NHS England data for June 2018 marked the third month in a row where numerous key cancer targets were missed; notably the two week GP referral to consultant appointment target and the 62 day wait GP referral to treatment target.

Recent data for the first quarter of 2018/19 indicates that performance has now reached an all time low.

With increasing demand on cancer services and exceptional pressures across the whole of the NHS, this blog will shed some light on some of the latest cancer performance trends and quality indicators and examine some of the key priorities for improving patient cancer outcomes as part of the forthcoming ten-year plan for the NHS.

There are currently eight main operational standards for cancer waiting times and three key timeframes in which patients should be seen or treated as part of their cancer pathway; two weeks, one month (31 days) and two months (62 days). Following the recent recommendations from the Independent Cancer Taskforce in 2015, NHS England will also be introducing a new 28-day diagnosis standard from April 2020 as part of their focus on improving early diagnostics and treatment. The targets alongside the latest performance data for June 2018 are displayed in the table below. 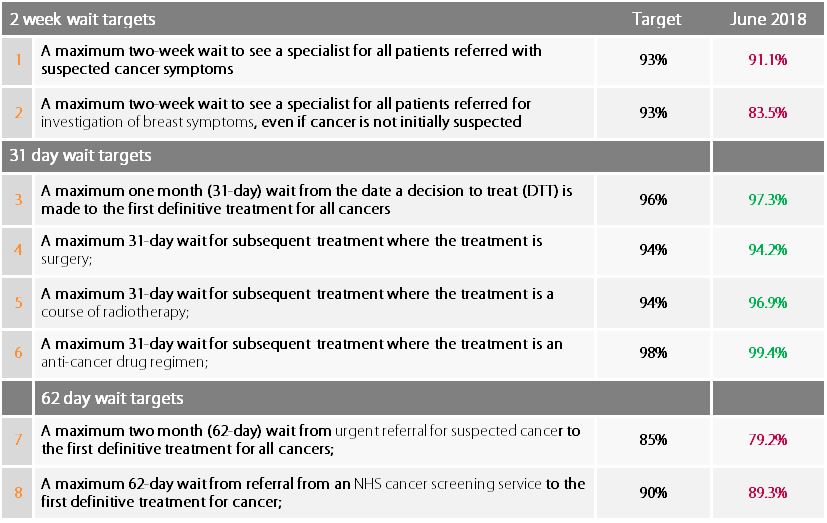 Patient demand for cancer services is increasing significantly. In 2017/18, almost 2 million patients were referred by their GP for suspected cancer, equating to more than 5,000 patients every day. When compared to five years ago, this is an increase of almost 60%. The increase in the number of GP referrals is down to a combination of different factors including the changing age demography of the UK population, the increasing awareness of the disease driven through national campaigns and changing medical practice, guidelines and referral thresholds. Changes to cancer screening programmes such as the recent lowering of the screening age for bowel cancer from 60 to 50 may also have an impact on the demand for diagnostics and cancer services in the future.

One of the areas of most concern is the 62 day wait cancer target which has been consistently missed at a national level since 2013/14. This means that more than one in seven cancer patients are now waiting longer than 62 days to start treatment following an urgent GP referral. In June 2018, performance slipped to 79.2% and only around a third (35%) of trusts were able to meet the 85% operational standard. This target is the only current waiting time standard which takes into account the patient's entire pathway from a referral to treatment which may explain why performance has been worse relative to some of the other cancer standards. A new standard will be introduced in 2020 to provide further insight into length to diagnosis within the pathway.

Although performance against the 62 day wait standard has been below target for a while, we are also now seeing performance slip against a standard which had, until recently, been consistently met by the NHS; the two week wait from an urgent GP referral to seeing a specialist. Between April and June this year, performance deteriorated to an average of 91.4% of patients being seen within two weeks against the 93% standard.

Delays in any area of care have an impact on patients. But in cancer care, the amount of time a patient waits for diagnosis and treatment can significantly affect outcomes and experience. The data suggests that the increased number of referrals is placing additional strain on cancer services, with demand outstripping the current resources available. These pressures are also evident across other areas of the NHS performance including the elective care waiting list, in emergency departments, and in mental health, ambulance and community services, signifying the challenges the NHS is facing in meeting current levels of demand.

Although performance has slipped against the cancer targets, it is important to note some of the positives which emphasise the exceptional care that trusts continue providing patients despite the immense pressures on these services. The NHS has been working to increase the speed of diagnosis for cancer services. For example, rapid diagnostic and assessment centres known as 'one stop clinics' are being piloted in various parts of the country in an attempt to streamline diagnosis for people with suspected cancer. It is hoped that these one stop clinics will be particularly useful for speeding up the diagnosis of certain cancers including breast cancer and if proven to be a success, will be rolled out on a national scale.

The results of the 2017 National Cancer Patient Experience Survey also highlight the dedication of staff in improving services for cancer patients. The recently published survey results revealed improvements in a number of areas relating to patient care. Most notably, when patients were asked to rate their care on a scale of 0 to 10, the average was 8.80/10, an improvement from 8.74/10 in the 2016 survey. In addition, the responses for nearly half of the questions in the survey improved, whilst only one significantly deteriorated. And despite waiting times now starting to increase, there were improvements in some of the survey responses relating to the time spent between referrals and hospital appointments, diagnostic tests and attending clinics as shown in the below table. This means that although performing against the waiting times standards is essential to ensure the best outcomes for cancer patients, it is also important to consider the patient experience when evaluating services.

What next for NHS cancer services?

The demand and performance data clearly illustrates the immense pressure on trusts to keep pace with the demand for cancer services. It is encouraging to see that patient satisfaction still remains high; however, in the context of the current widespread operational pressures across the whole of the NHS, it is going to be increasingly difficult for trusts to sustain this high quality of care for patients in the future without maximising the new investment as part of the five year funding settlement.

Given that one in two people will be diagnosed with cancer during their lifetime, it is essential that NHS trusts have access to the appropriate resource to deliver effective cancer services in the long term. This is why cancer was identified as an early priority for the long term funding settlement. The ten-year NHS plan needs to focus on improving the accessibility of cancer services for patients, expanding the specialist cancer workforce and delivering cancer prevention schemes.

It offers a real opportunity to develop a sustainable long term strategy for the delivery of cancer services in England. However, we need to be realistic about the current challenges and ensure that the task set for the provider sector will be realistic and deliverable, enabling trusts to deliver outcomes for cancer which are comparable to that of other western nations.

True picture of provider finances shows a tough year ahead

Adam Wright, policy officer (Finances) reflects on what we've learned about the scale of the financial challenge for trusts from the 2017/18 Department of Health and Social Care accounts.

NHS trusts warn that the financial and performance asks for 2018/19 look impossible to deliver.