COVID-19 pressures: an exploration of hospital activity through the first and second wave

Since COVID-19 emerged in early 2020, the virus has had a huge impact on the NHS and the country more widely. This blog compares the COVID-19 pressures trusts in England have faced during the first wave in March to May 2020, with the situation in the current wave starting in late 2020 - which for the purposes of this blog will be described as the second wave.

The availability of robust, accurate and timely data is essential for our understanding of the pandemic. Like many things, COVID-19 data collection and reporting began from a standing start in early 2020, and over time we have seen the range and depth of published data expand. There are now real-time official figures published across a range of indicators that we can use for analysis and comparison, including: 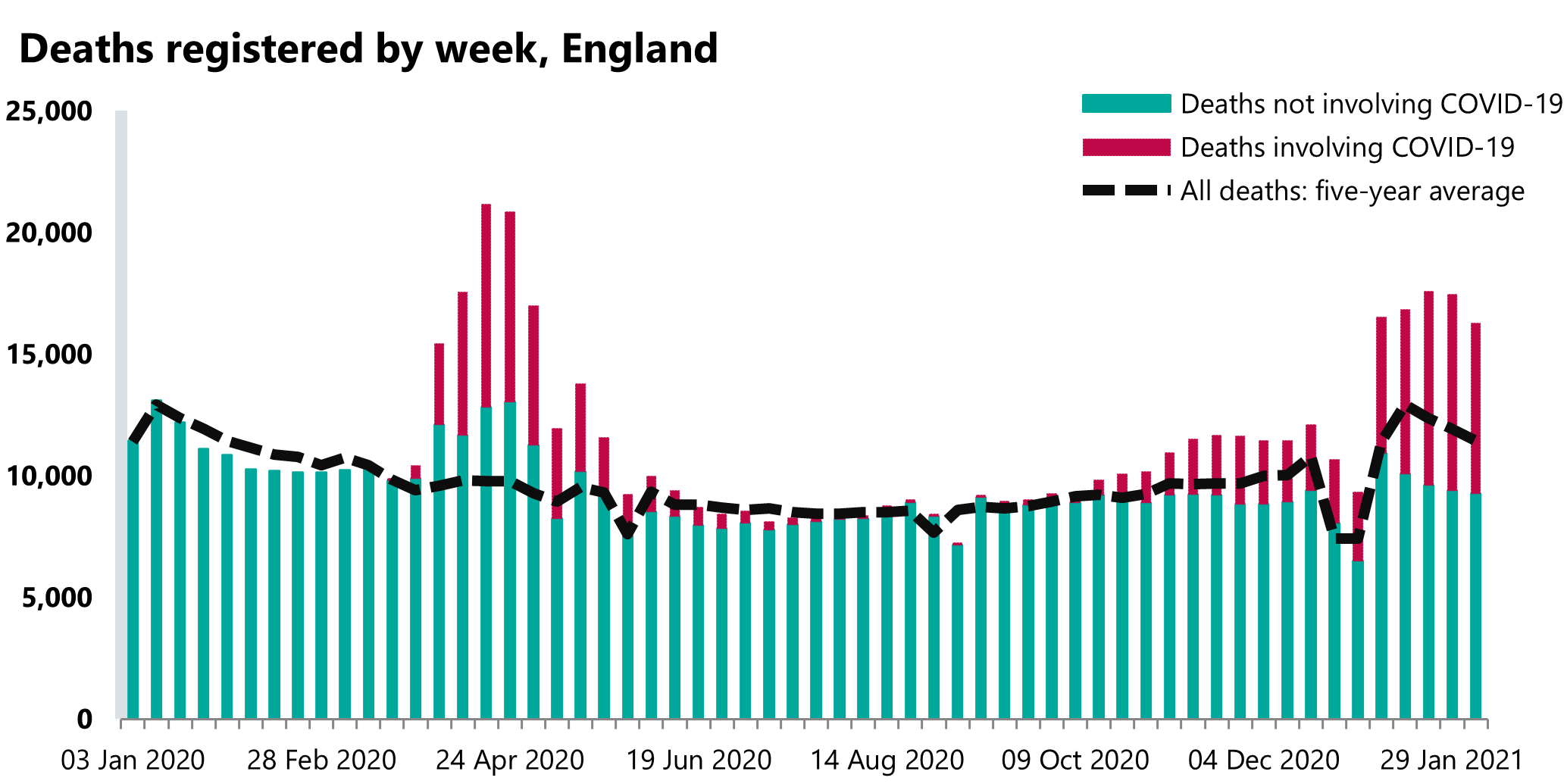 These headlines go some way to explain the national picture, but it is also important to track the virus on a regional basis. Through the tier system and regional lockdowns, efforts have been made to balance public health measures and the capacity of local health systems with wider economic and social outcomes.

In the first wave, London was the centre of the early outbreak, but this quickly spread to other parts of the country. Gradual recovery led to an encouraging few months in the summer where the number of cases in every region was far below the level seen during the first wave, even as access to testing was greatly expanded. Autumn saw several new outbreaks gathering speed, particularly in the North West and North East and Yorkshire. The introduction of regional restrictions (and the subsequent national lockdown) did then begin to have an effect, as numbers started to fall in these areas in November.

However, as warned by many, winter posed a new threat as a combination of factors made conditions more conducive to the transmission of the virus. The emergence of a highly contagious new variant in Kent fuelled a rapid expansion of cases, with London, the South East and the East of England rising fastest.

The number of patients in hospital in each region per 100,000 residents gives a clear view of the pressure trusts have been under.

From these population adjusted figures we can see London has suffered greatly in both waves, and all regions have seen much greater demand for hospital services in the second wave compared to the first. While other factors including hospital capacity, demographics and workforce all play a big part in a region's ability to provide care, the sheer scale of the COVID-19 demand has caused huge disruption in every region. To put this into perspective, COVID-19 patients made up 43% of all hospital patients in England at the peak of the second wave, and as many as 52% in London.

Over the past year, there has been genuine progress in many aspects of our response to the virus. Testing capacity has been hugely expanded and the contact tracing system is becoming more effective. We have far greater knowledge of the disease and how to treat the sickest patients, which has meant there are much better outcomes for many of those testing positive now. Additionally, we have been better placed to respond over winter than at the beginning of the pandemic through a range of operational improvements including:

Alongside this, the rapid progress of the vaccination programme is quickly moving us towards a position where a very large proportion of those most at risk of serious illness are protected. There is great hope that as the extreme pressures of the second wave gradually recede, the NHS will be able to take stock and recover in the coming months.

Several key challenges still present significant hurdles. Balancing staff wellbeing with the implementation of recovery trajectories to make headway on the large backlogs of non-COVID care is essential. In addition, the ongoing efforts to control the spread of the virus are as important as ever, particularly as new variants emerge, and the impressive roll-out of a sustainable vaccination programme must be maintained.

Our new briefing sets out four key, evidence and data driven, tests that must be passed before the government eases restrictions.

In this episode Adam Brimelow, NHS Providers director of communication, speaks to our analysis team on COVID-19 pressures for trusts and what trusts can expect in the coming months.

Letter from NHS Providers to the prime minister - February 2021