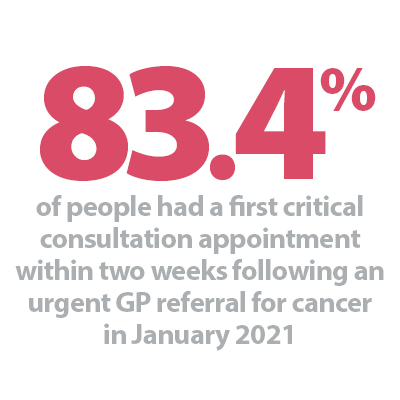 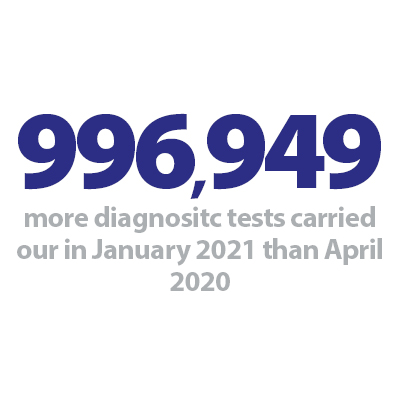 Each month in our NHS activity tracker we consider the national data and look across physical and mental health services to see what care the NHS is delivering, what is happening to waiting lists and how the NHS is performing against existing waiting time standards. We will also examine the ongoing pressures and challenges for trusts as they help staff recover from an unprecedented year, and address the care backlog.  We will also feature case studies from trusts to highlight the important work they are doing to adapt, improve and innovate in the face of the constantly changing clinical and operational environment.

As a direct result of the national lockdown measures, the COVID-19 pressures in many hospitals have started to ease in recent weeks. We have been tracking the trends in our daily dashboard.

Positively, infection rates are falling in the community and the NHS in England has administered over 20 million vaccines - with 34.4% of the population now having received their first dose.

Each month NHS England and NHS Improvement publishes statistics looking at performance across a range of services including urgent and emergency care, routine care, cancer, and mental health.  We have been tracking the trends in our daily dashboard.

Overall, and as a direct result of the national lockdown measures, the COVID-19 pressures in many hospitals have started to ease in recent weeks:

Elective care: In January 2021 there was a reduction in elective activity due to the ongoing COVID-19 pressures, resulting in a slight deterioration in performance against the 18 week standard and an expansion of the waiting list.

Diagnostics: The backlog in diagnostics continues to be concerning.  NHS performance falls short of the standard which states that 99% of patients should receive their diagnostic test within six weeks.

Cancer: Similar to other services, cancer activity is down from the previous month, but holding up better than during the first wave. Performance against the standards has dropped considerably. The two-week pathway for a consultant appointment following an urgent GP referral has the worst performance on record this month.

In terms of activity and performance across the three key cancer pathways:

Some disruption can be seen in the number of people being referred for mental health services as the second wave gathered pace. In December 2020, there were 6.9% fewer referrals than the previous month, although the total of 324,580 for the month remains 11% higher than a year ago, and 55% higher than the lowest figure during the first wave in April 2020.

This month’s data shows that the NHS has had to adapt in response to the latest wave of the pandemic. The data clearly shows that although across many areas, activity has dipped slightly, there has not been a reduction in activity comparable to that experienced during the first wave.

In fact, the NHS cared for 81% more patients in hospital at the peak of the latest wave when compared to the peak last April in addition to more non COVID patients.

Trust leaders are critically aware of the scale of the challenge ahead to address the care backlogs that span physical and mental health services and of the need to support frontline staff, many of whom are exhausted. Trusts will welcome the support of the national bodies and the government in prioritising and planning for the year ahead. 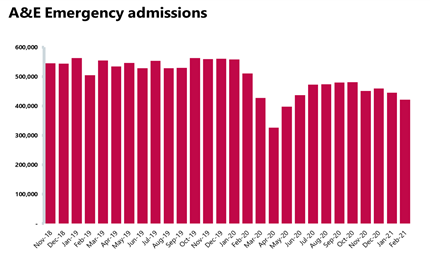 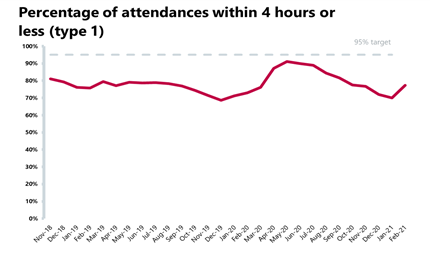 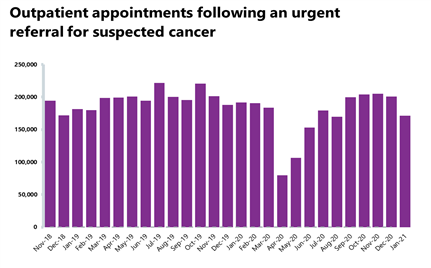 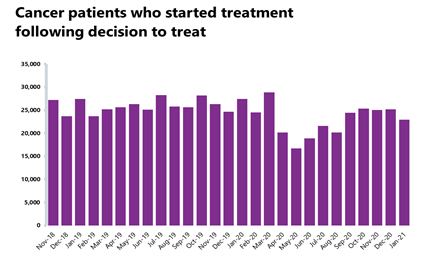 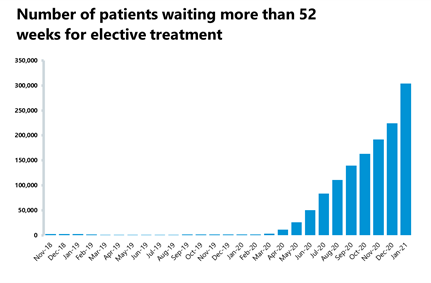 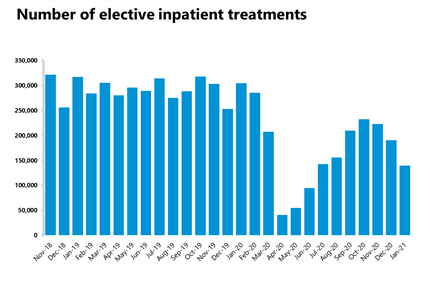 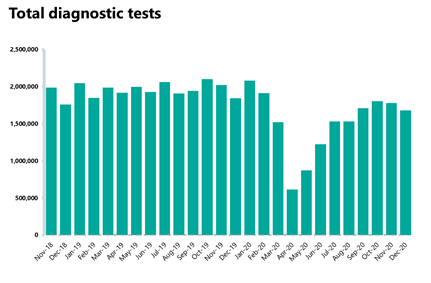 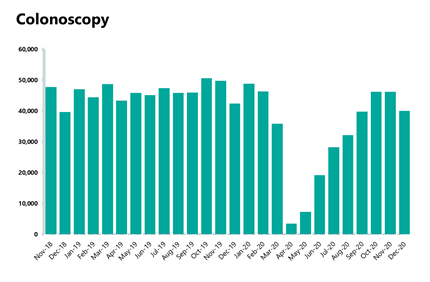 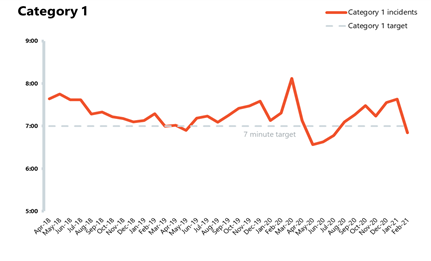 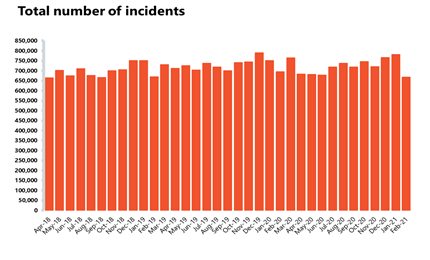 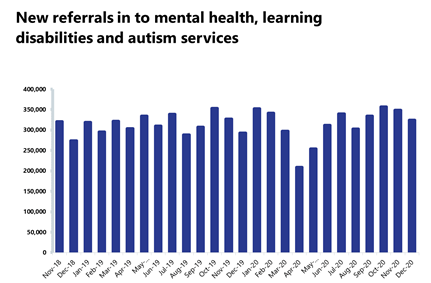 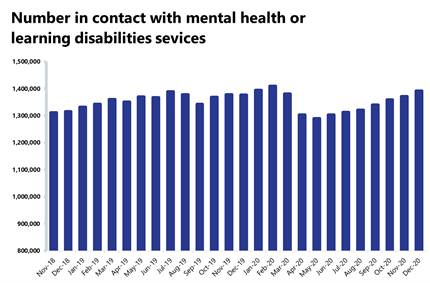 Daniel Elkeles, chief executive, and Dan Camp, divisional director for medicine and A&E, both of Epsom and St Helier University Hostpials NHS Trust, reflect on changes to their emergency department.

COVID-19 made us to reconsider the space in our emergency department. Our emergency and acute medicine teams had great ideas for working together in a new same day emergency care (SDEC) model but the emergency department configuration and separation of acute services compromised that vision. It was harder still once we considered the increased need for single rooms because of the pandemic. This meant our patients waited too long to see the right person or get to the right place, often in a waiting room where social distancing was very difficult. 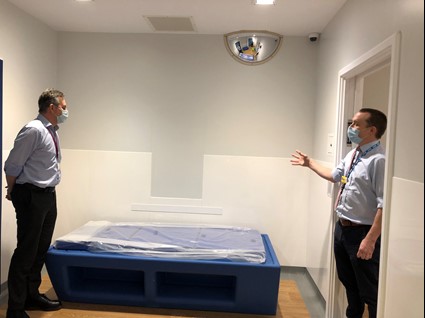 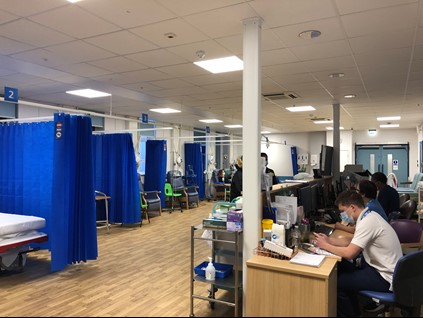 Our estate in the reception area was limiting the effectiveness of the streaming process and compromising patients' privacy. Furthermore, our mental health room was heavily occupied and patients in crisis were being cared for in other parts of the department, sometimes noisy and chaotic areas.

An opportunity arose for capital funding to expand our emergency department footprint so we developed ambitious plans to extend into the surrounding areas. The increased space enabled us to think differently about the patient journeys and create new purpose built areas that would support the models of care our clinical teams were aspiring to deliver together.

An opportunity arose for capital funding to expand our emergency department footprint so we developed ambitious plans to extend into the surrounding areas.

The biggest change was creating an expanded purpose-built SDEC unit which delivered 12 additional spaces to be shared between ED and acute medicine so patients can see the right doctor first time rather than waiting for assessment or treatment. We also built procedure and examination rooms to support prevention of unnecessary admissions, and four single rooms for patients who may need isolation. Running a COVID-19 SDEC in the latest surge meant space in Majors and Resus was kept free for those who were sickest.

We created more waiting areas so reception became less crowded and patients could socially distance. We also created a separated streaming room with view of the waiting area. At the same time we implemented directly bookable NHS 111 appointments to reduce unexpected patients arriving. In designing the new mental health rooms, we worked closely with psychiatric liaison and security teams from our local mental health trust to ensure the best possible use of space for safety and patient experience. We have been able to double our adult and paediatric spaces from one to two whilst making the environment quieter and more comfortable with en-suite facilities. 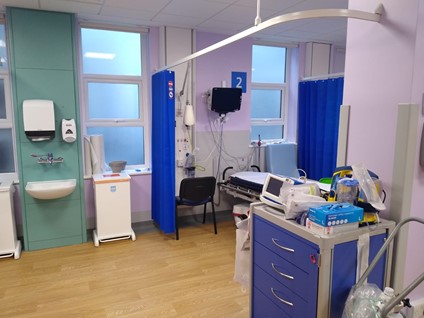 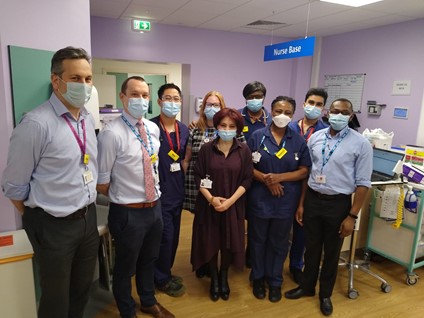 By using modular buildings connected to the department, we were able to maintain co-location of key non-clinical areas immediately adjacent to the emergency department , to help staff to take their breaks and attend handovers.

The impact has been that our time to triage and assessment have consistently reduced and the number of patients who walk in to the department has decreased. These things have meant that our waiting rooms are less crowded, overall time in emergency department is lower than previously, and our four-hour performance has improved. Our SDEC activity continues to increase, although the overall time in the SDEC unit is being maintained at appropriate levels. Overall, the capital programme has been a huge enabler for new ways of working that  deliver real improvements in safety and experience for all of our patients.

Overall, the capital programme has been a huge enabler for new ways of working that  deliver real improvements in safety and experience for all of our patients.

NHS has a mountain to climb to clear care backlog

"Today’s data reveals the incredibly steep mountain the NHS must climb as it seeks to clear the substantial backlog of care that has built up during the pandemic.

"The numbers are stark. More than 300,000 NHS patients have now been waiting for over a year for planned care with nearly 4.6 million people on the waiting list for elective treatment. We know these pressures are reflected across both physical and mental health services, whether delivered within a hospital, in the community or in people’s own homes.

"It is testament to the incredibly hard work of trusts and their dedicated staff that throughout January and February, they continued to carry out more consultations, operations, diagnostic tests, and cancer treatments than in the first wave, despite there being far more COVID-19 patients in hospitals across the country.

"But we cannot escape the fact, that with just 21 days to go before the new financial year starts, there is still no agreement on the NHS’s budget for next year. This begs the question of how trust leaders can plan frontline services, including addressing the care backlog, without certainty on their budgets.

"Talks between the Treasury and the NHS need to go up a gear and must be concluded this week. If they aren’t, there is a very real risk that trust leaders may have to start planning cuts of up to £7-8bn from NHS services from 1 April for the first half of 2021/22.

"Trust leaders need certainty now over their budgets and confirmation from the Treasury that any extra COVID costs they incur will be covered".