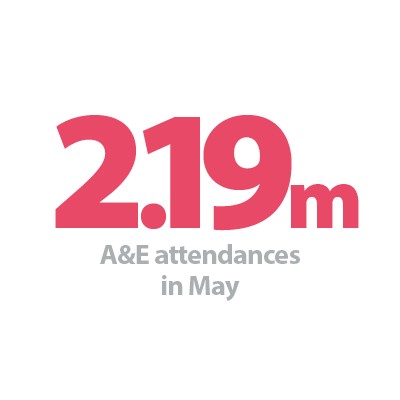 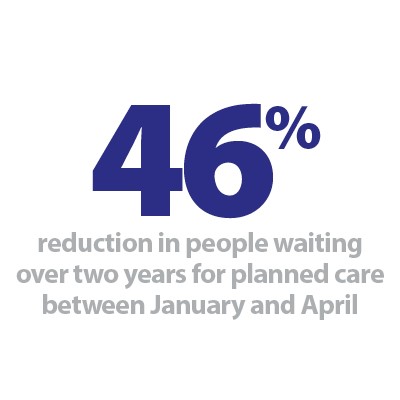 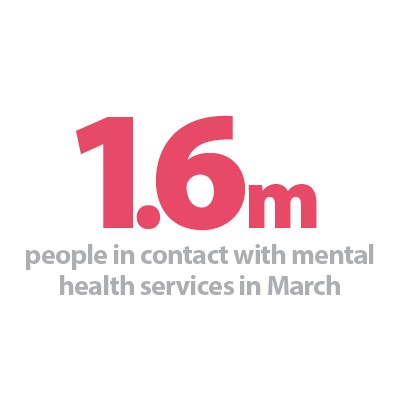 Trusts continue to face ongoing workforce and operational challenges as they take on the demanding task of clearing care backlogs. Staff absences have decreased but continue to be an issue for trusts. For example, between 5 May and 8 June, there were close to 64,000 staff absences, of which 17% were COVID-19 related.

Every month, trusts across England work tirelessly, trying to increase activity across their services to tackle long waiting times in the face of increasing demands. Today's data illustrate once again the remarkable work of NHS staff who endeavour to drive recovery and meet the milestones set out in the recovery plan.

Each month, NHS England and NHS Improvement publishes statistics looking at activity and performance across a range of services including urgent and emergency care, routine care, cancer, and mental health. Below we set out the latest trend for each clinical area.

Ambulance: Average response times improved in the face of increased demand across the urgent and emergency care pathway.

A&E and emergency care: Pressures continued to be felt in May, which saw the second highest figure on record for A&E attendances, alongside increased emergency admissions.

Diagnostics: The waiting list has decreased this month for the first time since December 2021 but remains larger than before the pandemic.

Elective care: The size of the waiting list increased again and remains considerably higher than pre-pandemic levels, but the number of those waiting more than 104 weeks has decreased for the third consecutive month.

Cancer: Activity for all cancer pathways has decreased compared to the previous month but two-week pathway (urgent referral) activity is now slightly higher than before the pandemic.

Delayed transfers of care: A high proportion of patients continues to remain in hospital despite no longer meeting the criteria to reside, highlighting issues with patient flow and the challenges of getting patients treated closer to or at home.

Mental health: Demand continues to increase, with record numbers of people in contact and being referred.

This month's data have, once again, highlighted the pressure currently felt by trusts throughout the country. Demand is mounting across urgent and emergency care, adding significant strain on the pathway and resulting in long waits for patients.

April and May registered record figures across a number of metrics. For example, we saw soaring numbers of A&E attendances alongside increased emergency admissions, as well as a substantial number of people waiting more than 12 hours to be admitted after the decision to admit. This figure remains very concerning and is still remarkably higher than three years ago before the pandemic. These statistics, alongside a high proportion of patients staying in hospital after no longer meeting the criteria to reside, reflect pressures and challenges with patient flow across the whole of the care and health system.

The pressures experienced in the mental health sector are equally difficult. Ongoing demand pressures exacerbate the existing challenges of balancing urgent with the continued effort to reduce the backlog of care across physical and mental health services.

Despite the challenges, these data also highlighted the extraordinary efforts of NHS staff who continue to deliver high-quality care to more and more people in England. We saw the diagnostics waiting list falling for the first time since December and the number of those waiting over a year for elective care decreased for the third month in a row. Equally, the data showed more calls received and more calls answered by NHS 111, and its importance in enabling access to appropriate care pathways. Although targets are not being met yet, we continue to see small improvements in ambulance response times the past few months, despite the increasing demand.

These figures reflect the complex and challenging issues which the NHS currently faces. Looking ahead, with parts of the country experiencing warmer temperatures, it is likely the demand for urgent care will increase, particularly for the already strained emergency services. We also know, however, we will keep seeing the hard work and drive of NHS staff reflected in these numbers, as well as their exceptional efforts to regain ground lost to the pandemic.

The success of providers in tackling the care backlogs

For this month's case study we feature an episode from our Providers Deliver: Tackling the care backlog series on The Provider Podcast. One trust featured in the episode is King's College Hospital NHS Foundation Trust.

From King's College Hospital NHS Foundation Trust, Clive Kay, chief executive, and Ranjeev Bhangoo, head of neurosurgery, explain how the neurosurgery team is using extra theatre time and capacity to carry out 750 more operations a year for patients with time-critical brain tumours and spinal cord compression to prevent backlogs building. As a result, they have been able to operate on individuals as quickly as before the pandemic and have also increased capacity by 7%. We also hear from Jo, the sister of one of the patients treated at King's, about her and her brother's positive experience: she explains that they did not feel "left on hold" and were as close to the neurosurgery team as before the pandemic.

You can listen to the episode below: 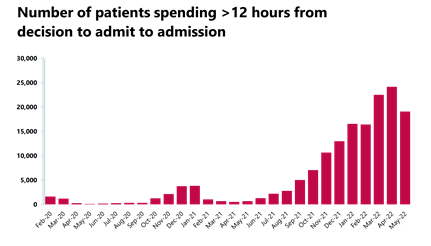 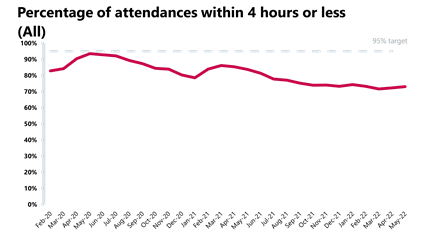 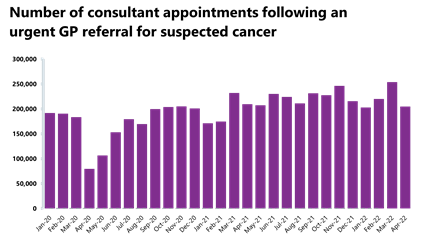 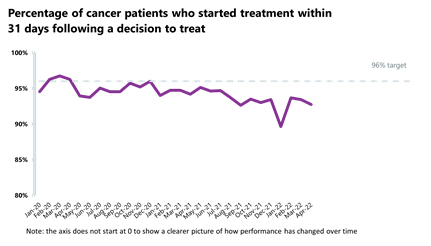 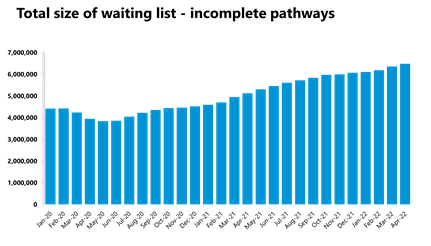 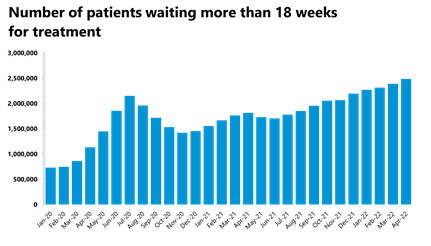 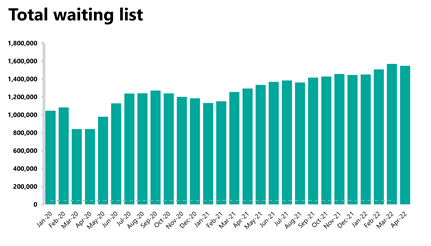 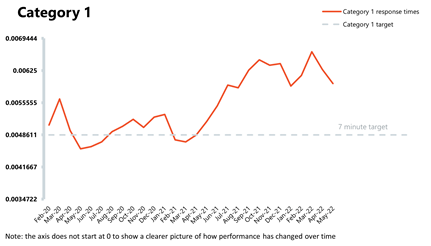 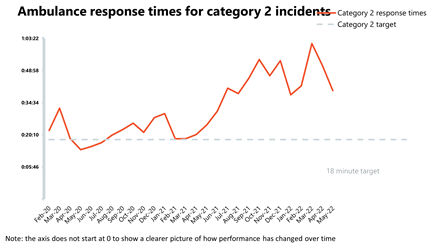 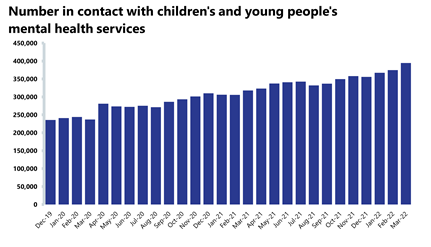 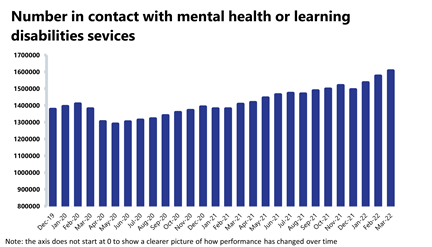 Health and care system under significant and sustained pressure

Responding to the latest monthly combined performance data from NHS England and NHS Improvement, the director of policy and strategy at NHS Providers, Miriam Deakin said:

"These figures reflect significant and sustained pressures across the health and care system.

"Urgent and emergency care is under particular strain, with a high number of 111 calls, high demand in A&E, and lengthy handover delays.

"With significant delays in discharging patients who are medically fit to go home, or to community settings, there are pressures across the health and care system resulting in delays as a patient moves through their care journey.

"However NHS staff are working extremely hard under these circumstances, and this too, is reflected in today's figures. Waits for diagnostics have reduced, and the number of people waiting over two years for a planned operation has been halved since January – a considerable achievement.

"Staff are doing their best to respond to new demand in mental health and community services as well as maintaining elective, cancer and diagnostic activity.

"But trust leaders remain worried about the weeks and months ahead. Hot weather spells over summer increase demand for care making things more difficult for emergency services, and delayed discharges will continue to be a challenge without sufficient investment in our social care system.

"It will be important for the forthcoming urgent and emergency care strategy to explore a system wide response to these pressures, from preventative measures, to emergency response, hospital admission and after care in patients' homes."