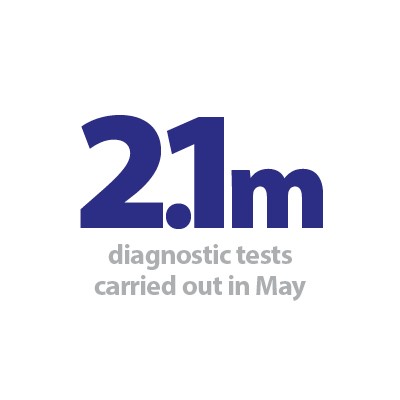 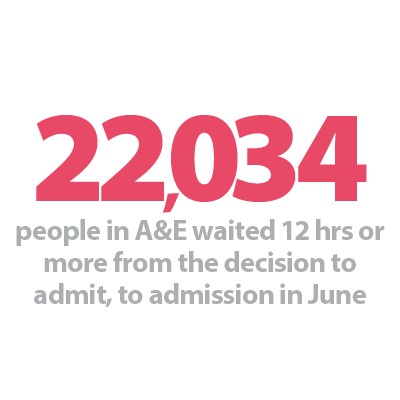 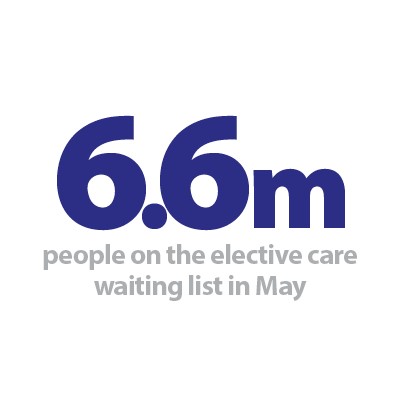 Trusts across the country are working under challenging circumstances while undertaking an ambitious catch-up plan to clear care backlogs. Workforce and operational challenges continue to be felt, with staff absences remaining high: between 9 June and 6 July, an average of over 71,000 staff absences were registered, of which 23% (16,413) were COVID-19 related.

Additionally, NHS staff continue to provide COVID-19 care to an increasing number of patients as infection rates soar. Hospital data (13 July) showed over 13,000 beds occupied by patients with COVID-19, representing the highest figure in three months and an increase of almost half since 1 July.

As we saw last month, trusts continue to work tirelessly, increasing activity across their services to tackle long waiting times even when demand climbs. Today's data show yet again the incredible work of staff determined to meet the recovery plan milestones.

NHS 111: Fewer calls received than in April 2022, but activity is at similar levels compared to the month before.

Ambulance: Average response times deteriorated, particularly for category 2, while category 1 incidents are almost 40% higher than before the pandemic.

A&E and emergency care: Busy month with high numbers of attendances and admissions, both higher than pre-pandemic levels.

Diagnostics: Although the waiting list is slightly higher than the month before, activity has increased and is currently above pre-pandemic levels.

Elective care: Similarly, the size of the waiting list continues to grow but inpatient elective care activity has also increased and those waiting more than 104 weeks has decreased for the fourth consecutive month.

Cancer: Activity for all cancer pathways has increased compared to the previous month and the number of patients seen within two weeks of an urgent referral registered its third highest month on record.

Delayed discharges: A high proportion of patients continue to remain in hospital despite no longer meeting the criteria to reside, highlighting issues with patient flow and the challenges of supporting patients to recover closer to or at home.

This month's data have, one more time, reflected the current pressures trusts are experiencing throughout the country, with ongoing high levels of demand across urgent and emergency care which continue to add significant strains on the pathway, resulting in longer waits for patients. Additionally, we know that the rise in COVID-19 cases in the community translates into more patients in hospital as well as staff absences, which aggravate the already difficult circumstances. Looking ahead, trust leaders remain concerned about the ongoing pressures throughout July as the temperatures keep rising, putting additional strain on urgent care services.

Some of the figures from today illustrate some of these challenges, particularly around patient flow, denoting some of the issues experienced across the social care and health system. For example, we are seeing yet another increase in the number of people waiting more than 12 hours from decision to admit to admission, as well as a larger proportion of patients remaining in hospital after no longer meeting the criteria to reside. Equally, this month's data registered a severe deterioration in category 2 ambulance response times, a reminder of the ongoing pressures being felt by the ambulance sector.

That said, the most notable aspect of these data continues to be the hard work of NHS staff, evidenced once again by the figures we are seeing today. In the face of outstanding pressures, we saw records levels of diagnostic tests carried out for May, now above pandemic levels, the third highest month on record for the number of patients seen within two weeks of an urgent cancer referral, and a fourth consecutive drop in the number of those waiting over 104 weeks for treatment. It is clear that staff are endeavouring to drive recovery while providing quality care during an undoubtedly challenging time.

Shak Rafiq, the strategic communications and stakeholder engagement lead at Bradford District and Craven Health and Care Partnership, discusses how the use of technology and strong partnership working has helped to improve flow and discharge across the health service.

We are proud of how our place-based partnership has instilled an ethos called Act as One. This sees all partners coming together, acting as one to help us work towards our shared purpose and vision of keeping people 'happy, healthy at home'.

As a result, the Bradford District and Craven Health and Care Partnership has consistently met and exceeded discharge and flow targets, often held up as an exemplar regionally and nationally. Cutting edge technology, innovative practices and strong relationships across partners aligned to a bold vision are the reasons given for the sustained and improved performance. We worked together as partners to respond to the pandemic and manage our collective capacity, given that lack of staff was a major issue for all services. We reviewed our operating model systematically during the summer of 2020, using our data and feedback from our staff teams to optimise flow across acute and community services while continuing with winter planning.

We have been bringing together our workforce using data to provoke conversations between staff groups to facilitate flow, improving outcomes on an ongoing basis and focussing on multi-agency decision making, sharing learning across our two acute hospitals covered by our partnership.

We introduced new roles to assess for discharge in hospital, moving social workers out of hospital to assess people's longer-term needs. The trusted assessors for the council-managed enablement service (BEST) and short-term social care beds work closely with the discharge team and voluntary and community sector (VCS) providers. As a result, we are seeing improved outcomes in terms of capacity and benefits to the person.

We have advanced digital infrastructures in place across both Airedale NHS Foundation Trust and Bradford Teaching Hospitals NHS Foundation Trust. At Bradford, bed occupancy levels are monitored through our AI powered command centre. The command centre, the first of its kind in the UK, provides real-time information to help make informed decisions on managing patient care and flow. At Airedale, our digital care hub delivers remote monitoring technology such as Telemedicine and MyCare24 but also acts as our multi-agency referral hub providing joint triage of discharges.

We achieve top quartile performance in the country in lengths of stay in hospital. On a weekly basis, hospital admission is avoided for 20-30 people. Despite the workforce challenges in social care, the independent care sector has, on average, supported 40 people a week out of hospital or to short-term home support.

Working with our VCS

We had already invested as a system (adult social care and health) in the VCS, with care navigators working alongside the discharge team, home from hospital and through a multi-agency support team (MAST) to reduce demand on adult social care. Further investment was made into MAST to expand the capacity during winter 2020-2021 which particularly made a difference for people with mental health challenges and alcohol dependency.

MAST is one of our flagship partnership projects. The MAST team consists of VCS organisations based across both hospitals (Bradford Royal Infirmary and Airedale Hospital) delivering interventions and health messaging in emergency departments and across some wards to support the health system and provide support around some of the identified 'pressure points' in the system.

The team works across emergency departments and wards as appropriate, identifying patients, at all stages of their admissions from triage to the ward, who would benefit from mental health, older person's services or alcohol interventions.

As a result of the successful implementation of the new models, it was recently confirmed that a further £1.2m in winter funding is being invested into the VCS Alliance to set up wellbeing hubs in communities at place level.

We continue to see great energy and engagement from teams and plan to continue to scale up the implementation. We have already started to integrate this work into our urgent community response pathways and we're also building it into our virtual ward place plans. A few examples of our joint successes are:

The Department for Health and Social Care set improvement targets for length of stay in hospital and transfers out of hospital in December 2021, with targets to be achieved by the end of January. We achieved those targets by the first week in January – the best performance across the North East and Yorkshire. 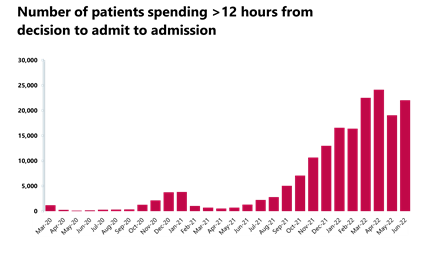 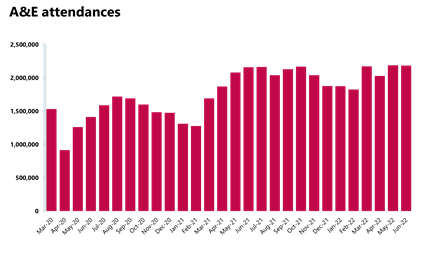 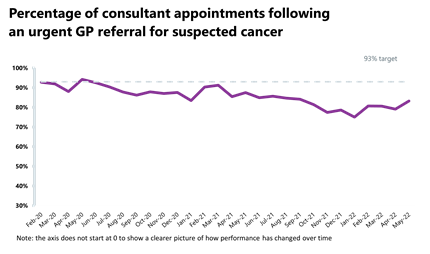 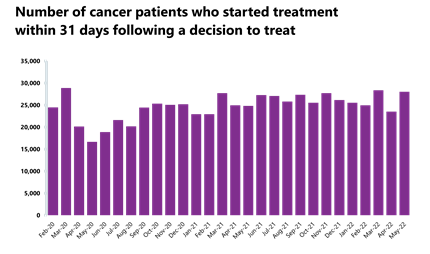 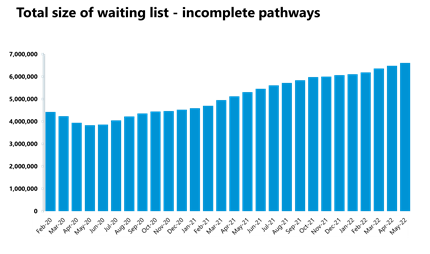 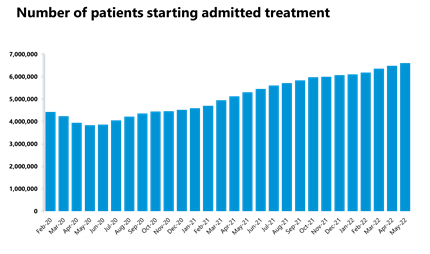 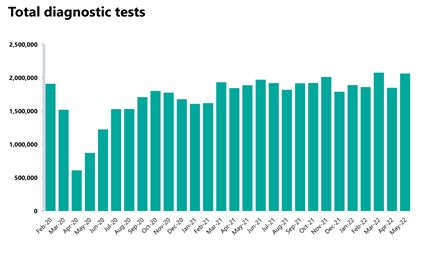 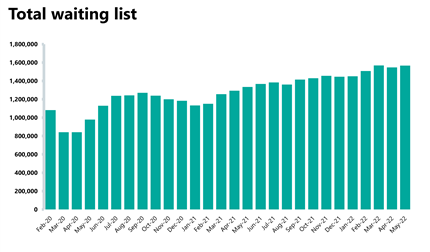 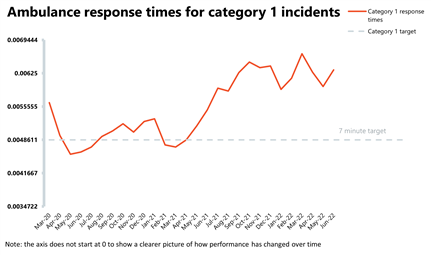 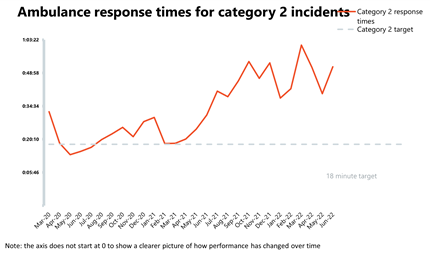 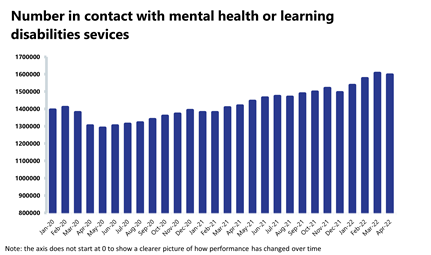 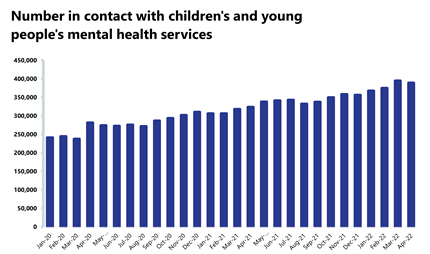 No let up in pressure on NHS

"With the country now in the grip of a heatwave, hospitals and ambulance services especially are already feeling the heat from levels of demand normally witnessed in winter.

"Trusts and staff are doing everything they can to get back to and even exceed pre-pandemic activity levels. In May the number of people waiting more than two years for planned treatment came down for the fourth month running while more than 2 million diagnostic tests were carried out – the highest ever for that month. It was also the third highest month on record for the number of cancer patients seen within two weeks of an urgent referral. And 80% of community providers met the new urgent community response target.

"Mental health services saw the second highest number of people in contact with them since records began too.

"Meanwhile COVID-19 is resurgent. With more than 13,000 people in hospital with COVID-19 – up by almost half in less than a month – on one day in July alone almost 27,000 staff were absent due to the virus.

"There is huge pressure on beds, we have more than 100,000 staff vacancies across the NHS currently, and a lack of social care capacity means that hospital patients can't be discharged as soon as they could be to recover closer to home. Delayed discharges were worse in June than they were in May, having a serious knock-on effect on the rest of the health and care system – particularly on ambulances left queuing up outside busy A&E departments waiting to admit patients.

"It's a huge credit to trust leaders and frontline staff that we are seeing progress on some measures, but this is a very worrying picture at a time of year when you would hope to see some respite in these pressures."