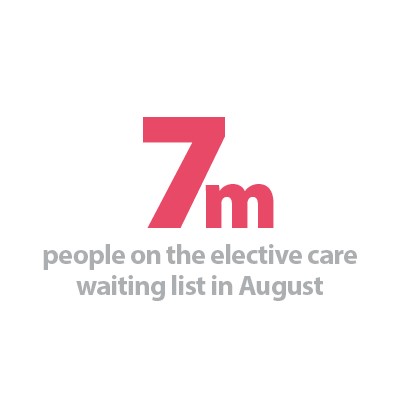 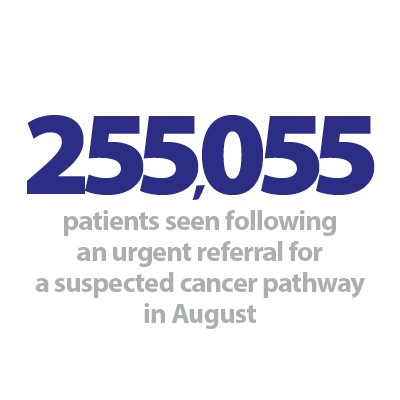 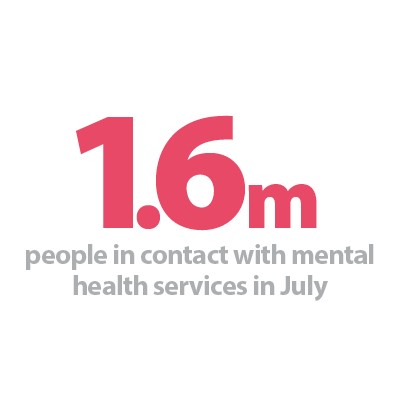 Trusts are continuing their efforts to clear backlogs and meet the ambitious elective recovery plan, facing challenging circumstances with a rise in COVID-19 cases and consequent staff absences. The latest figures for 5 October show 10,522 patients in hospital with COVID-19, more than double the number seen last month and 92% more than at the same time last year. In the month of September, over 63,000 staff absences were observed, of which 12% (7,818) were COVID-19 related. As COVID-19 activity in hospitals continues to rise, the additional pressure of this across the entire health and care system is evident in this month's urgent and emergency care figures. Trends once again show an upward tick in A&E attendances and ambulance response times after a small decline the previous month.

Ambulance: Despite a slight fall in incidents, response times deteriorated in September.

A&E and emergency care: Another busy month in A&E with about 2 million attendances and the number of patients waiting over 12 hours from decision to admit increasing this month.

Elective care: Activity has increased but so has the waiting list, now at over 7 million.

Cancer: Record levels of activity for the two-week pathway and performance against the waiting time standard has increased slightly for the 62-day pathway.

Mental health: Although numbers have decreased for referrals, care contacts attended, and IAPT referrals, these figures remain high, with the second highest number of people in contact with mental services on record at over 1.6 million.

It is mid-point through autumn, and it is clear from today's figures that pressures across the urgent and emergency care pathway are impacting performance, with further increases in ambulance response times and longer waits in emergency departments. Trying to improve performance against existing targets is incredibly challenging for all acute trusts with major A&E departments. Data from this month shows the scale of the challenge with none of these trusts meeting the existing four-hour target, and performance ranging from 31.8% to 86.2% against the 95% standard.

In relation to long waits in A&E before admission after the decision to admit; 38 out of the 124 trusts with a major A&E department reported having no patients waiting 12 hours or more. Although the challenges are widespread across the country there is variation. Out of the 86 trusts who had waits over 12 hours, 28 of these trusts had over 500 patients waiting longer than 12 hours in September – this is three fifths of all waits over 12 hours.

These widespread pressures across urgent care are the symptom of lack of flow through the health and care system. Today's discharge figures show that on average each day only 40% of patients that are medically fit, were discharged. Trust leaders tell us that the delays relate to difficulties in arranging adequate care packages at home, in the community or in social care.

Despite blockages across the system, trusts are increasingly collaborating and working together to tackle waiting lists. This month saw record levels of diagnostic tests and people being seen on the two-week pathway for a suspected cancer, exceeding pre-pandemic activity. Numbers in contact with mental services also continue to exceed pre-pandemic levels.

These data show that in the face of demand continuing to outstrip supply and the knowledge that patients are often waiting longer than anyone would like, NHS staff continue to work incredibly hard, delivering more activity than ever to help patients.

Walsall Healthcare NHS Trust has delivered the best ambulance handover performance in the West Midlands for 18 of the last 19 months, measured by the percentage of ambulances handed over from West Midlands Ambulance Service to the trust within 30 minutes of arrival.

The trust is a small to medium sized integrated provider of acute and community care, with approximately 550 inpatient beds at Walsall Manor Hospital and is the lead provider for the Walsall Together place-based partnership with NHS, local authority and voluntary sector partners, which is a key asset to the borough. The trust has been on an improvement journey having exited Care Quality Commission special measures just three years ago, in 2019, and has adopted an organisation-wide approach to managing urgent and emergency care (UEC) pathways.

Ned Hobbs, the chief operating officer at Walsall Healthcare NHS Trust, explored what factors have helped the organisation to maintain timely ambulance handovers when many other trusts have struggled to do so. Ned was clear that there is no single intervention, or 'silver bullet' to solve this problem. He described the cumulative impact of multiple improvement interventions all the way along the UEC pathway, both in hospital and community settings, as ultimately supporting timely ambulance handovers. Ned felt that there were four particularly significant factors that contributed to the trust's success.

Firstly, Ned referred to the importance of culture and leadership. He described a very strong ethos at the trust, saying that "the patient who has dialled 999 in our community and needs conveying to hospital is our patient – it is our responsibility to ensure they are promptly handed over to the emergency department (ED)". This culture extends well beyond the ED itself and has been identified in external visits from NHS England and Black Country integrated care board leadership teams.

Secondly, the trust has worked hard to develop and enhance alternatives to ED for patients with UEC needs. This has included:

Thirdly the trust has developed its rapid assessment and treatment (RAT) function for ambulance arrivals within ED, utilising an emergency care assessment practitioner workforce that is drawn from both registered nursing and paramedic professions. This skilled workforce is highly competent at initial assessment and initiating treatment plans for patients arriving by ambulance, and the experience of paramedic staff helps foster a strong mutual understanding with ambulance service colleagues.

Last, but certainly not least, Ned highlighted comparatively good patient flow out of ED for patients who need onward care in the hospital. The trust still has difficult days, and Ned emphasised has lots more to do to improve further, but relatively good flow out of ED supports the releasing of ED cubicles to in turn ensure the next patient arriving by ambulance can be handed over. Good flow in Walsall is helped by:

Despite the progress that has been made in Walsall, the trust is mindful of the risk of increased pressure over the winter months ahead and has approved a place-based winter plan at its public board meeting in October 2022 to build further resilience in UEC. 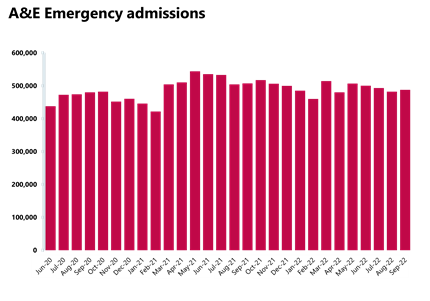 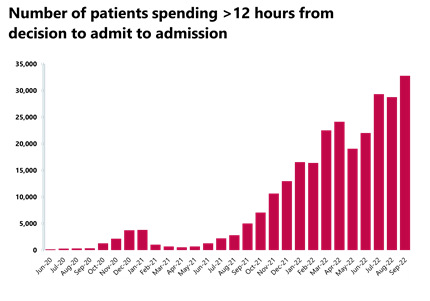 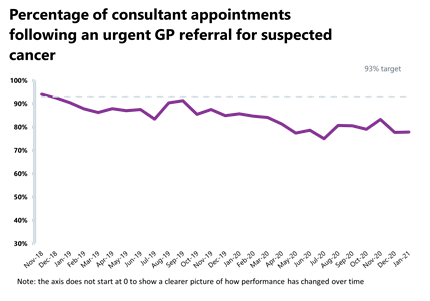 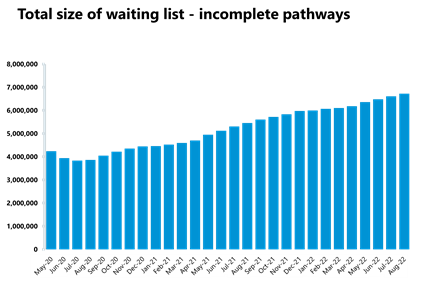 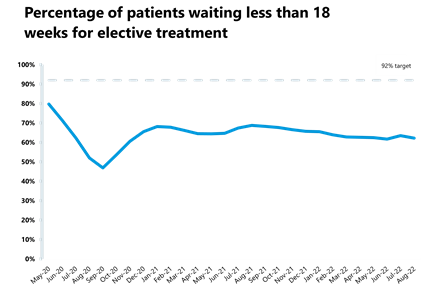 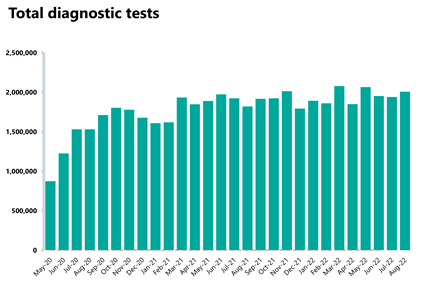 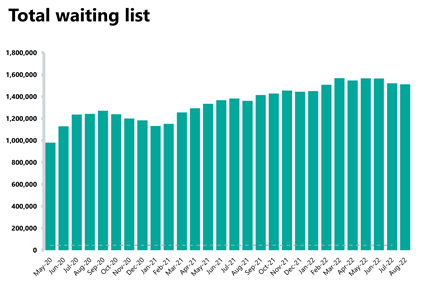 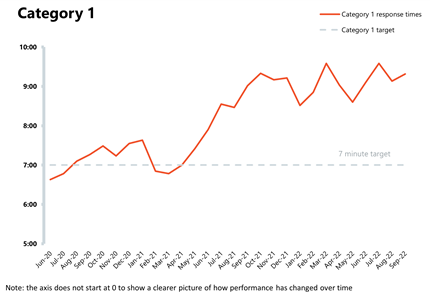 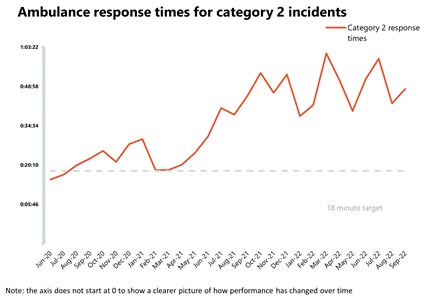 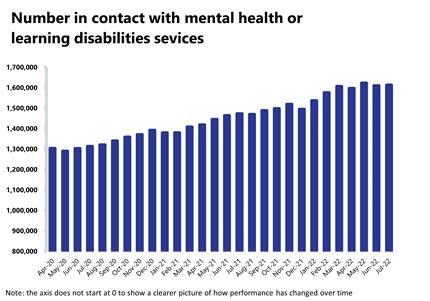 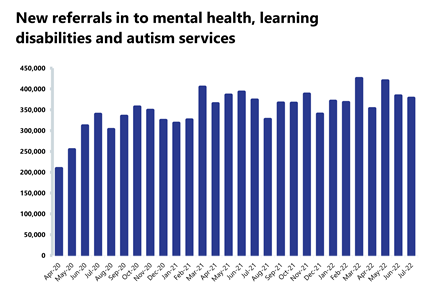 "Today's figures underline the ongoing and serious challenges facing the health and care sector as we head into winter.

"Despite the best efforts of trust leaders and frontline staff to deliver more tests, checks and scans – including urgent cancer referrals – the level of pressure across the whole health and care system remains concerning.

"A&E performance and ambulance response times in September reflect pressure across the whole system, with the number of people waiting in A&E more than 12 hours after the decision to admit worryingly high.

"The total waiting list for planned procedures has hit another record with over 7 million people now waiting for care. Yesterday's announcement of an amber alert by NHS Blood and Transplant for blood stocks, which could lead to some non-urgent operations being delayed will pile on further pressure.

"And the risk of a 'twindemic' of COVID-19 and flu, which could further hinder efforts to bear down on waiting times, is also looming large.

"Demand for community services continues to be high and trust leaders are telling us mental health services are coming under particular strain with 1.6 million people – the second highest on record – in contact with their services last month.

"The number of people remaining in hospital despite being medically fit to be discharged, often due to the huge demands on social care capacity and staffing, is staggeringly high. It is concerning that only 40% of patients were discharged when ready.

"Local trusts and their social care partners are working together to ease these pressures but until there is real and substantive investment in social care, delayed discharges will continue to hinder the ability of the NHS to deliver timely care for patients."