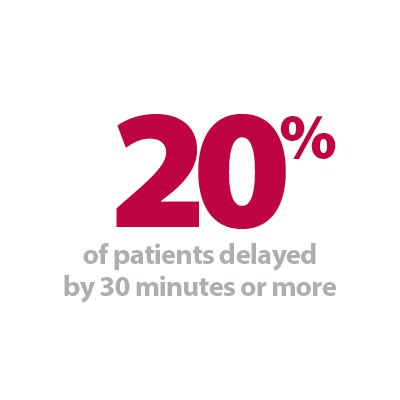 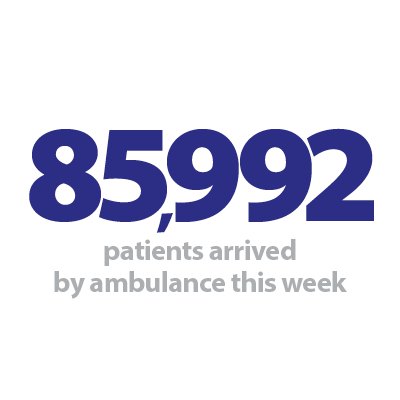 Although these figures offer some encouragement, the latest winter sitreps data continue to highlight the pressures trusts are facing, particularly in the ambulance sector.

The data this week again show the difficulties trusts are experiencing. Despite the slight decrease, staff absences are still high and undoubtedly present a major challenge for services across the country. The data also highlighted pressures in the ambulance sector, with the highest number of patients arriving by ambulance since the beginning of winter, as well as increases in handover delays.

Encouragingly, however, the number of patients staying in hospital longer than seven, 14 and 21 days continues to decrease. It is important to note, though, that these figures are still much higher than the same time last year. Also noteworthy was the figure of the total number of patients who are fit for discharge but remain in hospital – it remained high during week nine, but the proportion has fallen slightly again this week, highlighting once more that trusts are working hard to discharge those who no longer need to remain in hospital.

This week's data present once again a very busy position for trusts but also reflect the incredible work of NHS staff across many areas and under challenging conditions such as elevated workforce absences. As with last week, it is important to note how these figures offer valuable insight into the overall picture for the NHS: a record number of ambulance arrivals and elevated delayed discharges not only denote increased demand but are also a sign of system wide pressures across services such as mental health, social care and primary care services.

Innovative ways we are reducing our care backlogs at Barking, Havering and Redbridge

Thangadorai Amalesh, divisional director for surgery at Barking, Havering and Redbridge University Hospitals NHS Trust, discusses some of the various ways the trust is innovating to reduce its care backlog after the initial peaks of the pandemic. This includes creating a COVID-secure green zone, 'Bones weeks', and 'prEYEority week'.

The pandemic is the reason we, and NHS trusts across the country, are dealing with much bigger waiting lists than usual. However, it's shown our teams what they're capable of, giving them the confidence to seize new innovations and work in different ways; essentially, the pandemic has also given us a route out of our planned care backlog, and better ways of working for the future. We've held super clinics, created a 'hospital within a hospital', and invested in state-of-the-art diagnostic equipment; however, our biggest strength has been our team's abilities to use what they learned, and turn it into business as usual. 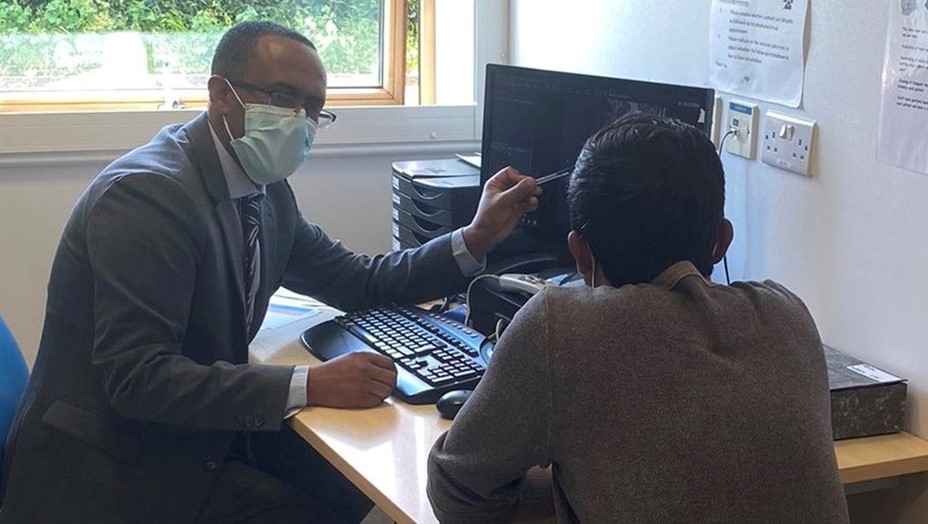 At the end of March 2021, following a difficult 12 months, two lockdowns and several variants, we had 2,430 patients waiting over a year for treatment. By the end of last December, that was down to 959. We hope to get close to zero by this summer. This has also been the first winter since 2017 (well before anyone had heard of COVID-19) that we've been able to keep planned care running, including carrying out our full list of cancer operations. A key aspect of this has been creating our 'hospital within a hospital', a COVID-secure green zone at one of our sites, King George Hospital. Zoning our hospital to reduce the spread of COVID-19 enabled us to keep surgical beds free, rather than them being used for emergency cases, often the norm during a busy winter.

It's where we focus on the six specialties which make up 50% of our waiting lists – general surgery, ear, nose and throat, trauma and orthopaedics, ophthalmology, urology and gynaecology. We carried out over 12,000 surgeries here in 2021, continuing through yet another more infectious variant of COVID-19, Omicron. It's also what has made one of our earliest initiatives to get patients the care they need possible – our 'Bones R Us' project.

As soon as we were out of the first wave, and while still dealing with complications due to the pandemic, we knew we needed to turn our attention to our waiting lists. Postponement of all non-urgent planned care had meant our surgery team were one of the worst affected. With backing from our executive team, our surgeons were given the freedom to try something new... and came up with the first of our 'Bones Weeks' (quirky names became a bit of a theme for these projects!). Held in October 2020, we carried out 135 hip and knee replacements, 88 day cases and 27 spinal procedures in just seven days, with one patient even able to go home the same day as their hip replacement, thanks to having the right support in place.

Efficiency, teamwork and better theatre utilisation made it a success; no shows were reduced thanks to a call from their surgeon the day before their operation; each theatre ran three sessions from 8am to 8pm daily with prompt starts; additional porters reduced delays in getting patients to theatre; and our COPE team, which supports patient with their rehabilitation at home, was key in maintaining patient flow throughout and ensuring safe discharges.

What we learned has helped us increase our overall theatre utilisation to more than 80%. We've since held two further Bones Weeks, in June and July 2021 and are one of the best performing trusts in London for high volume, low complexity surgery. One happy patient who has benefitted from two of our Bones Weeks (having knee replacements in October 2020 and July 2021), was grandfather Mark Well-Bolger, who called his experience 'top notch'.

Innovation hasn't just happened within our theatres either. Other examples include our Scalpel project, where six special Saturday clinics were held, seeing more than 1,000 patients, including a 103-year-old woman whose treatment was delayed by the pandemic. Our prEYEority week saw 980 ophthalmology patients in just five days, helping to set the standard for a waiting time of less than two months for surgery, while ear, nose, throat (known as ENT),  Kidz, a series of weekend super clinics, ensured our younger patients were not forgotten. 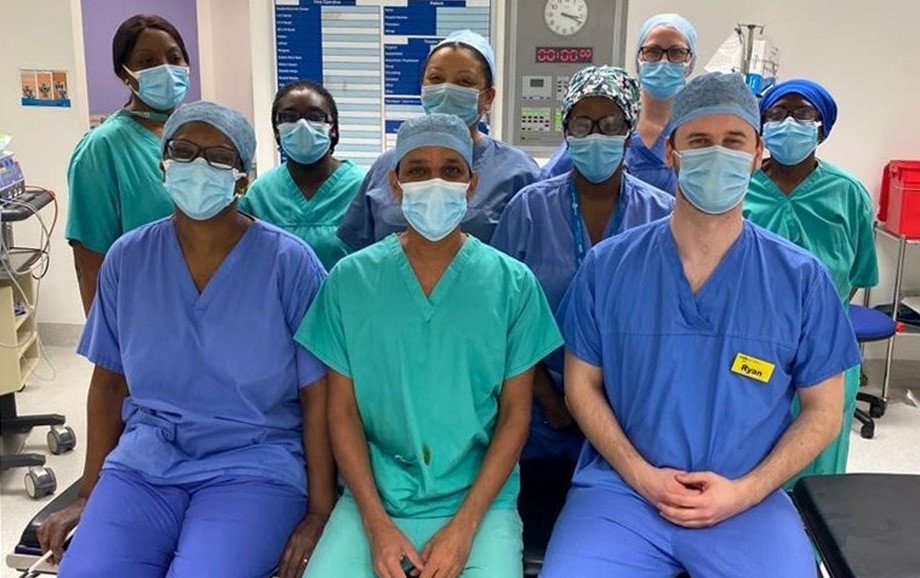 Our Theatres 3.0 project saw 32 skin cancer patients operated on in one day – triple the usual volume, and Gastronaught brought together clinical and administrative teams, working together to review patients on the waiting list. Not only did they get through three times as many patients as planned (and found over half could be redirected or discharged without needing an appointment), they found a whole new, more efficient, way of working.

Our innovative approaches have been given the seal of approval by senior figures, including Sir David Sloman, who visited King George Hospital last September, and Professor Neil Mortensen, president of the Royal College of Surgeons of England, who came for a tour of our green zone in December.

At one point last year, three out of every four admissions from our emergency department into our surgical specialties were for patients who were already on waiting lists for treatment. It's a reminder of why we must sustain this work to reduce the backlogs.

Read more about how we're reducing our waiting lists on our website.

Urgent and emergency care continues to be under strain

"Although the number of COVID-19 cases is falling, trusts are continuing to work under immense pressure, as demonstrated by these figures.

"Once again, urgent and emergency care is under considerable strain, and one feature of the sustained pressure we are seeing in the NHS is the way that safety risk is being borne increasingly by ambulance services.

"We're seeing that in the number of handover delays where paramedics have to stay with patients – often in very difficult circumstances – before they can transfer them into the care of hospital colleagues.

"And that adds to delays for them getting back on the road for people who need help in the community – contributing to the delayed responses we're seeing even for some of the most serious cases.

"There's a lot of work being done to tackle these problems, which – in truth – reflect pressures right across health and care, with high demand and limited resources, including severe workforce shortages and difficulties in discharging patients when they're fit to head back home or to other community settings.

"This week, we also continue to be concerned about capacity, with overall bed occupancy remaining steady around 93% – well above the recommended safe level of 85%.

"Trusts are doing all they can, trying out new ways of working, helping each other out and bringing in additional support where that's appropriate.

"We need to see more support for social care to help ensure patients can return home or to other community settings when they're ready.

"We need to recognise the crucial roles of mental health and community services in helping keep people out of hospital.

"And there's a role here for all of us, not least in making sure we're vaccinated and boosted to protect us against COVID-19."