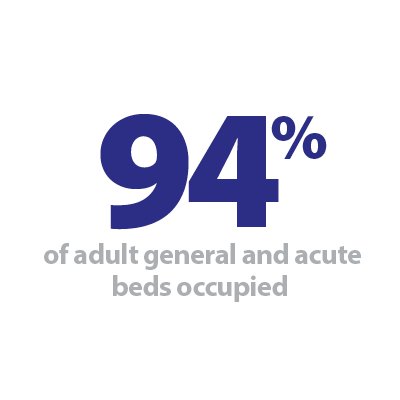 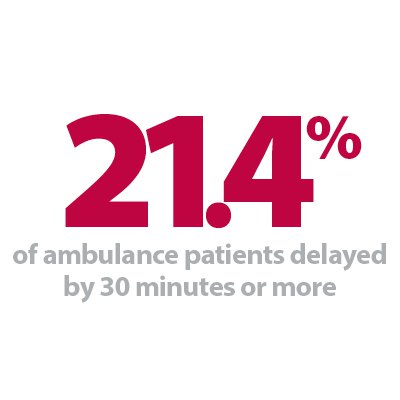 Today we saw the tenth week of the winter sit reps published by NHS England and NHS Improvement, as well as the January publication of performance and activity statistics. This week was also marked by the announcement of the delivery plan for elective care recovery, setting out NHS England and NHS Improvement's ambitions to restore activity and performance to pre-pandemic levels, including expanding capacity, a reduction in waiting times, and transforming the delivery of care to reduce the elective backlog. You can read NHS Providers' summary in our On the day briefing.

This week the statistics regarding COVID-19 are encouraging, with 59,193 new cases recorded on Wednesday 9 February, representing a decrease of 27.3% since the week before. Hospital statistics similarly registered decreases in the number of hospital admissions, in the number of patients in hospital and in the number of patients in mechanical ventilation beds. However, when looking at the performance figures below, it is important to consider the impact of the Omicron surge in December and January, which undoubtedly aggravated already challenging conditions for NHS trusts across England. This month's data indeed reflects some decreases in activity, but also highlights the extraordinary effort of NHS staff providing care under difficult circumstances.

A&E: the first month of 2022 saw 1.8 million A&E attendances (0.1% decrease from December 2021), a figure remarkably higher than the one observed one year ago (up by 43.1%). Similarly, although emergency admissions in January were slightly down compared to December (-2.8%), they were still 8.9% higher than one year ago. The number of patients waiting more than 12 hours from the decision to admit to admission has also increased by 27.5% on the previous month to 16,558 (the highest number on record), illustrating the pressures felt in the emergency sector. This number has increased considerably in a year (an increase of 335% since January 21) and is now 482% greater than two years ago before the pandemic.

NHS 111: although there were 13% fewer calls received (1.8 million), January 2022 registered the highest number of calls received in any January since records began. However, 77.8% of these calls (1.4 million) were answered, a figure up by about seven percentage points from December 2021.

Elective care: the size of the waiting list has increased again to 6.07 million in December 2021, a 1.2% increase on the previous month, making the waiting list now 37.4% greater than two years ago before the pandemic. There were some dips in activity here, with the number of admitted inpatient pathways, non-admitted pathways and new RTT pathways decreasing since the previous month.

Cancer: figures also show a decrease in activity in December 2021, with fewer patients being seen by a consultant across the two-week, 31-day and 62-day cancer pathways compared to the previous month (down by 12.6%, 5.7% and 5.1%, respectively). However, encouragingly, performance against the waiting time standards improved for those on the two-week and 31-day pathway.

Diagnostics: activity decreased in December 2021 for the first time since August 2021 but remains just below levels seen before the pandemic (2.7% lower). However, December 2021 saw about 120,000 more diagnostic tests compared to December 2020. In December 2021, the waiting list continued to increase and reached another all-time high at 1.4 million.

These are the key headlines for winter sitrep data for week 10:

The January performance and activity figures highlight the pressures felt during the peak of Omicron surge, at a time when there was a record number of NHS staff absences. We can see the particular strain in urgent and emergency care with increased A&E attendances and an increased number of patients waiting more than 12 hours from the decision to admit to admission. Equally, the elective care waiting list has grown again and is now 37% greater than pre-pandemic levels alongside care backlogs for mental health and community services.

However, despite dips in activity observed in some of the figures, the data also reflects the extraordinary of NHS staff during a critical time: more NHS 111 calls have been answered, diagnostic activity is up since the year before, and performance against the waiting time standards improved for those on the two-week and 31-day cancer pathways. Winter sitrep data from this week also convey the challenges felt by trusts at the moment, with high adult G&A bed occupancy rates, increased handover delays and increased critical bed occupancy rates. Looking at these two strands of data, we can see the pressures across the system, with increased demand for mental health services and a high proportion of patients staying in hospital despite no longer meeting the criteria to reside, both highlighting the pressures across the system.

With the announcement of the delivery plan for elective care recovery, NHS England and NHS Improvement set out a plan to address long waits, in particular the elimination of the longest waits of over two years by July 2022 and the reduction of the number of people waiting more than 62 days to start their cancer treatment by July 2022. Trusts will undoubtedly work flat out to deliver these and we will keep monitoring data to track the progress of NHS England and NHS Improvement's new ambitions.

The number of people on a hospital waiting list in England has hit 6 million for the first time. About one in 20 of those has been waiting – for routine care such as knee and hip surgery – for more than a year. Naturally, such figures have heightened the need for health and care organisations to address their care backlog even more efficiently, safely, and rapidly than ever before. The elective recovery plan set out stretching targets to bear down on the backlog. One way of doing this is through Waiting Lists Initiatives (WLIs) which are used by NHS trusts to tackle waiting lists and to meet government targets. They are extra clinics in hospitals at nights and at weekends and NHS patients can also be referred to private providers.

NHS England announced a £160m funding plan to tackle waiting lists at accelerator sites in May 2021. Although the project was focused on a dozen areas and five specialist children's hospitals, this agile response has delivered a significant number of planned operations and procedures. Amanda Pritchard, NHS England and NHS Improvement chief executive, said: "Treating around 400,000 COVID-19 patients over the past year has inevitably had a knock-on effect on non-urgent care, but our incredible staff still managed to perform more than 2m operations and other treatments in the first two months of this year when the hospitals were at their busiest with COVID-19 patients. With COVID-19 cases in hospitals now significantly reducing thanks to the extraordinary success of the NHS vaccination programme, our focus is now on rapidly recovering routine services."

The North Central London Integrated Care System has been chosen by NHS England to become one of 13 integrated care systems (ICSs) to become an 'elective accelerator system'. As part of the North Central London ICS, North Middlesex University Hospital NHS Trust took up the challenge and drew up plans to work collaboratively, making optimal use of resources in order to: reduce waiting lists, improve patient experience and use the funding to create additional capacity, including extended service hours, WLIs and using the independent sector.

North Middlesex University Hospital NHS Trust has been using Locum's Nest workforce solutions since June 2018 to advertise their vacant bank shifts, grow their staff bank and reduce their agency spend. By using an innovative and intuitive digital platform, the trust has benefited from drastically increased shift fill rates (number of vacant shifts covered by clinicians), consistently over 80% and a large engaged temporary medical workforce who are keen to fill gaps where required.

Even though WLIs are not bank shifts per se, we realised that the same principle could be applied to create one electronic gateway for all additional sessions done by substantive staff. As Locum's Nest was already used trust-wide and supported the organisation to transition from paper-based process to e-timesheets – ensuring executive oversite, clinical accountability, and robust approval process, we identified that the most important benefits would be the ability for the trust to process weekly payments to doctors and minimise the administration burden. In less than six months, our cloud-based solution enabled nearly 4,200 hours of patient care to be delivered, which represents over 700 consultant shifts – half of which were done by surgical specialties.

It is worth noting that a portion of the doctors who applied and worked WLIs shifts for North Middlesex University Hospital Trust were also covering bank shifts in neighbouring trusts such as Epsom and St Helier University Hospital NHS Trust, Barnet Enfield and Haringey Mental Health NHS Trust and Mid and South Essex NHS Foundation Trust. This is a real testimony to the willingness of NHS clinicians to work flexibly and collaboratively with other trusts. Indeed, one important contributing factor to the success we've seen at North Middlesex University Hospital NHS Trust is the trust's membership in the Digital Collaborative Bank (DCB) – the largest workforce coalition of NHS trusts in the country spanning across four ICSs since August 2019.

As a member of the DCB, the trust can directly plug its workforce gaps from nine large acute NHS trusts across all grades and specialties. The DCB now has over 6,000 HR-compliant clinicians ready to cover thousands of shifts each month, positively contributing to continuity of patient care and saving millions on agency costs. For North Middlesex, joining the DCB meant:

Each NHS trust which is part of the DCB has saved £3-4m in agency costs. By working openly and collaboratively, the group's fill rate was consistently 5-10% higher than the average trust working independently, reaching a record-breaking 91% shift fill rate across all trusts at the height of the pandemic.

To find out how your organisation can benefit from Locum's Nest workforce solutions, get in touch with Dr Ahmed Shahrabani at ahmed@locumsnest.co.uk.

"The latest monthly figures demonstrate the intense pressure trusts were under during the peak of the Omicron surge, at a time when there was the highest number of NHS staff absences for any winter on record.

"Urgent and emergency care was under particular strain. In January, A&E attendances were up by 43% from a year ago. The number of patients waiting more than 12 hours from the decision to admit to admission also increased, and despite some improvements, ambulance response times for the most urgent calls remain a real cause for concern.

"In December, the elective care waiting list also grew to 6.07 million, now 37% higher than two years ago before the pandemic. While there was a reduction in cancer and diagnostic activity, performance against two of the three cancer targets improved, and 120,000 more diagnostic tests were completed compared to one year before in December 2020, thanks to the tremendous efforts of NHS staff.

"This week, the elective recovery plan was published, setting out how the NHS' capacity to deliver tests, checks and treatments will help trusts to bear down on routine care backlogs.

"However, today's figures also show that there has been an increase in the number of mental health referrals in November, up by 11% since a year ago. The NHS must be supported and resourced to address mental health and community service backlogs too.

"Additionally, alongside these plans, the NHS urgently needs a national long term workforce plan, and we must see funding solutions for social care to reduce pressure across the system."