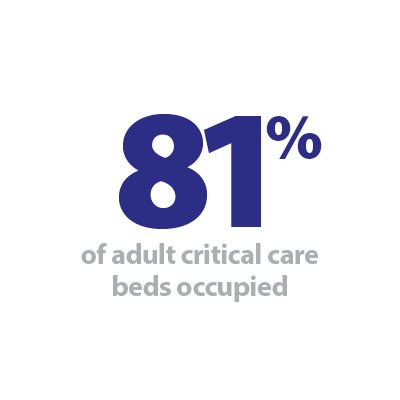 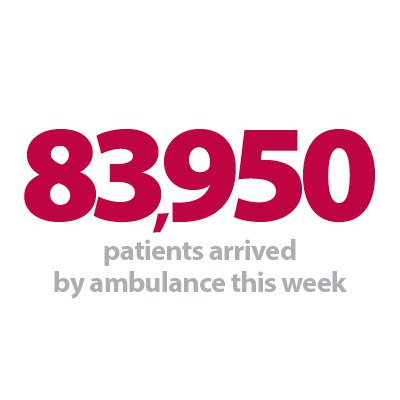 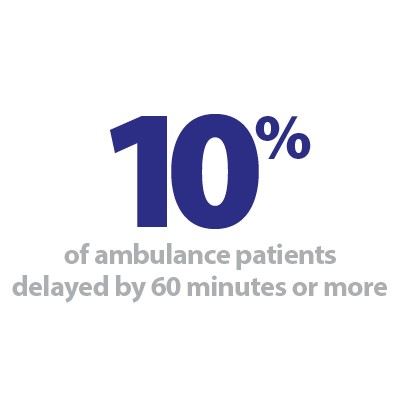 Today we saw the second week of the winter sitreps published by NHS England and NHS Improvement. The latest developments in the COVID-19 pandemic continue to impact the NHS and the recent surge in cases associated with the rapid spread of the Omicron variant is concerning trust leaders.

Staff continue to work tirelessly under severe pressures as we begin to see the effect of Omicron across the country. Recent data (15 December) showed almost 70,000 COVID-19 cases in England alone, an increase of 56% since the week before, and hospital admissions and the number of patients in hospital also increased by 8% and 5%, respectively.

On this second week of our NHS Winter Watch campaign, we were able to compare figures to last week's, as well as to last year's. These data highlight the ongoing pressures trusts are facing as the Omicron wave rises.

These figures reflect the challenging winter pressures but also highlight the extraordinary efforts of NHS staff to provide the best possible care under difficult circumstances. Ambulance service figures indicate the ongoing demand, with a slight increase in ambulance arrivals. Handover delays are also still high and almost twice as many patients were delayed by 60 minutes this week compared to this time last year.

Bed occupancy rates remained relatively stable since last week but are still extremely high, which will feel busier for trusts as they juggle COVID-19 patient care alongside workforce constraints, all of which will be aggravated as Omicron spreads. Moreover, we are seeing more patients staying in hospital this week, as well as an increase in the number of beds closed due to D&V.

With Omicron infections sharply increasing, we can also expect growing numbers of COVID-19 admissions and hospitalisations, as the new variant appears to be more contagious. Even if a small percentage of people need hospital care this could still be a large number if we have thousands of infections. We have also started to see rising numbers of sickness absences, which are likely to escalate further as the situation develops. Additionally, NHS staff are also working tirelessly to deliver life-saving booster jabs and vaccinations. All of these are undoubtedly challenging circumstances, which are rightfully concerning trust leaders at this early stage of winter.

Victoria Corbishley, head of health and local crisis response at British Red Cross, discusses the organisation's high intensity use (HIU) teams which work with A&Es to help prevent patients from needing to revisit emergency departments – following on from their report last month.

At this time of year, patient flow is more important than ever. Many of you will be aware of British Red Cross' winter pressures services, which we've run for the past five years on top of our year-round assisted discharge work. Managing pressure and patient flow involves both the back and front doors of hospitals, so I want to tell you more about our HIU teams working with A&Es.

Some people end up at crisis point and come into A&E multiple times. High intensity use of A&E is when someone comes in five or more times in a year, but for some people it can be 50, 100 times – or even over 300 times in one year.

No-one wants to be coming to A&E that often. Repeat visits should flag there's something else going on, and a better intervention is needed. People who come to A&E a lot can feel guilt and frustration, which becomes a barrier in itself. Sometimes, when we call people referred to our service, they don't want to pick up the phone for fear they are in trouble. Sometimes we send them a card – not an appointment, just a nice card, with a message. We begin by saying "I'm worried about you. Do you want to try doing something differently?"

One gentleman we worked with had attended 323 times in a year, for medical reasons (most people who come to A&E often need clinical attention, and they're more likely to need hospital admittance). From talking to him and working with him, we found out his benefits needed sorting out, he was hungry, he had no heating or hot water, and he had no family support. We were able to sort his benefits, get the boiler fixed, and find him a connection into his community. We also helped him navigate the healthcare system – which is, let's be honest, complicated for all of us – so he got the answers and support he needed. In the first six months of working with him, he only attended A&E once. In the second six months, he didn't need A&E at all.

Last month we published our report Nowhere else to turn which looks at this issue in more depth. The report looks at years of NHS and population data to understand the trends, often linked to health and societal inequalities, behind repeat visits to A&E. Most importantly, it includes the experiences of healthcare staff, and the people themselves.

We need numbers to get a grip on the issue, and show the benefit of high intensity use work. So here are some facts: in England, people who often attend A&E account for 29% of ambulance journeys. They move house 25% more than the general population. They are more likely to live in areas of deprivation. But on a positive note, we know that intervention works – at British Red Cross we've seen high intensity use projects reduce A&E attendance by 35-84%, and a recent evaluation of our service in Stockport showed a saving of over £400,000.

But people are more than numbers, and the aim of our work is always to improve people's lives – if you focus on the person, reduction in attendance will be a natural by-product. We want to pull people out of the stream before they get pulled under. The only way to do this is to begin with a clean sheet, with a personalised, de-medicalised, de-criminalised approach. Our approach is based on the NHS Right Care model, established by Rhian Montieth. We work alongside people, helping them build confidence and resilience, so eventually instead of us navigating the healthcare system for them, they will reach the point of being able to advocate for themselves, and thrive in all parts of their lives.

Currently there are around 100 high intensity use services in England run by the NHS and voluntary sector, covering different health settings, including mental health, A&Es, primary and secondary care. However, that's not enough to cover all emergency departments. Imagine the impact if every hospital – and the wider system – could access these services? And what change that could make during the busy winter period?

"These figures highlight how trusts are consistently working under significant pressure, operating beyond full stretch, before Omicron has even taken full hold in the community.

"Trust leaders are deeply concerned about the surge in COVID-19 cases, with almost 70,000 confirmed new infections yesterday in England.

"While the picture is still emerging about how severe the impact from Omicron might be, the NHS is expecting many more patients in hospital over the coming weeks, as even a small percentage of people needing care from thousands of infections is still a large number.

"This is coming at a time when critical care units are already running at 80% occupancy, and more generally hospitals have over 93% of beds occupied. And we know this stretches across ambulance, mental health, and community services where rising levels of COVID-19 will also have an impact.

"Trust leaders are also concerned that Omicron will lead to more staff absences, due to sickness or self isolation, as we have begun to see in today's data.

"At the same time, trusts are addressing the significant care backlog which built up over the pandemic, and the emergency pathway is seeing real strain, with 10% of ambulances now waiting over an hour before being able to handover patients into busy emergency departments.

"And the NHS is also mass mobilising to extend and accelerate the vaccination campaign, to meet the government's target for all adults to be offered a booster dose by the end of December. This is an incredibly complex logistical challenge to deliver on top of their normal work to keep services running safely.

"What is evident from these figures is that staff are working incredibly hard to deliver for patients under really intense pressures."