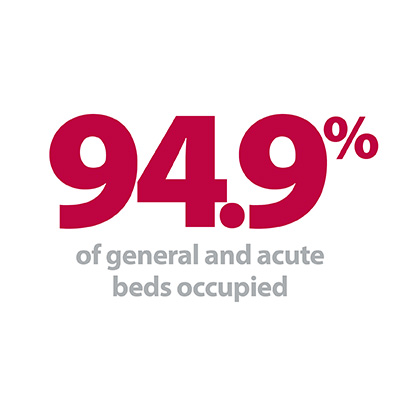 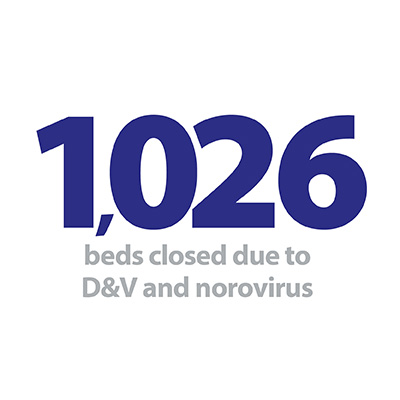 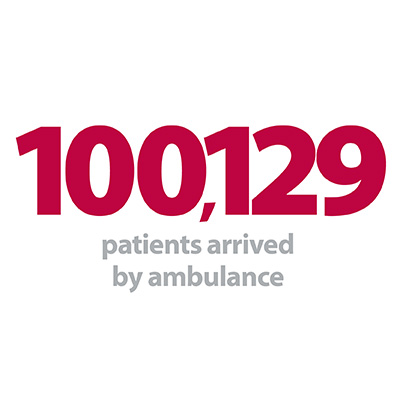 The first week of the NHS winter sitreps series was published today, covering key areas of hospital capacity and the urgent and emergency care pathway. Now that purdah and the election period are over, the coming weeks will see NHS England publish this data weekly each Thursday until the end of February.

This year we will again be analysing the data and sharing the experiences of trusts and their partners as the challenges develop on the frontline. We will also be highlighting examples of positive winter preparations as local health and care services work together to meet the expected high demand for their services in the coming months.

With publications on hold until after the election, NHS England were obliged to release the December monthly performance summary alongside the first winter sitreps data. A steady stream of intelligence and media reports have pointed towards earlier than usual flu and norovirus creating unprecedented pressure building in the sector, so anticipation of what the figures would show was high.

A&E performance has declined throughout the year, setting repeated new lows against the four-hour waiting time target. This month only 81.4% of patients were seen within the target, the lowest on record, and no trust across the country achieved the 95% standard. However, this only tells part of the story, as attendances have grown dramatically and are now 5.2% higher than a year ago. A larger number of patients are being seen within four hours, but as demand outstrips supply, trusts have found it increasingly difficult to maintain performance against this target.

A&E performance has declined throughout the year, setting repeated new lows against the four-hour waiting time target. This month only 81.4% of patients were seen within the target, the lowest on record, and no trust across the country achieved the 95% standard.

In addition, there are more people on the elective care waiting list than ever before, and more waiting longer for treatment as the squeeze on hospital staff and resources intensifies. This month saw the waiting list grow to 4.45 million, and only 84.7% were treated within 18 weeks, well below the 92% standard.

Performance against the cancer standards has also suffered, with both the two week and 62 day standards being missed every month in 2019. The 31 day standard, once seen as almost a given, has been missed in four months throughout the year, and only just scrapes in this month by 0.2%.

Against this negative backdrop from the monthly figures, we turn to the weekly data to gain further insight into the performance and pressures faced in the sector. Key headlines for week one include:

Performance against the cancer standards has also suffered, with both the two week and 62 day standards being missed every month in 2019. The 31 day standard, once seen as almost a given, has been missed in four months throughout the year, and only just scrapes in this month by 0.2%.

On the face of it, there is very little good news coming out of the first weeks’ data. The number of beds open is slightly higher than at the same point last year, suggesting trusts have tried to take on board the message to open additional capacity wherever possible. But, with limited time and a shortage of resources and workforce to affect significant change, trusts will again be reliant on the superhuman efforts of staff to maintain standards of care to their growing number of patients.

Examples of steps taken to meet the upcoming challenges include the biggest ever flu vaccination programme currently underway, continuing initiatives to free up beds occupied by those fit enough to go home, and improvements to the 111 telephone advice service. Each week we will publish views from a trust or other care organisation to detail a specific element of their approach, and this week we hear from Steffi Camm, fundraising officer at Unicef, and Bev Allingham, chief deputy nurse at University Hospitals Plymouth NHS Trust, who discuss the Get a jab, give a jab campaign to incentivise staff to be vaccinated against the flu ahead of winter.

The Get a jab, give a jab campaign is giving trusts a positive impact story to incentivise their staff to get their flu jab

Steffi Camm, fundraising officer at Unicef, describes the campaign and discusses the tools that they share with trusts who have signed up.

While many trusts are doing their final push to encourage staff to receive the free flu jab, Unicef’s Get a jab, give a jab campaign is helping to keep the issue top of mind.

Get a jab, give a jab was created by staff in the NHS and other health organisations. The campaign encourages staff to take up a free flu vaccine and in turn, their NHS trust makes a donation to Unicef. These donations are spent on our programmes vaccinating vulnerable children around the world against life-threatening, preventable diseases such as measles, polio and tetanus. This includes vaccine procurement, the safe transportation and delivery of the vaccines and training health workers to administer them. 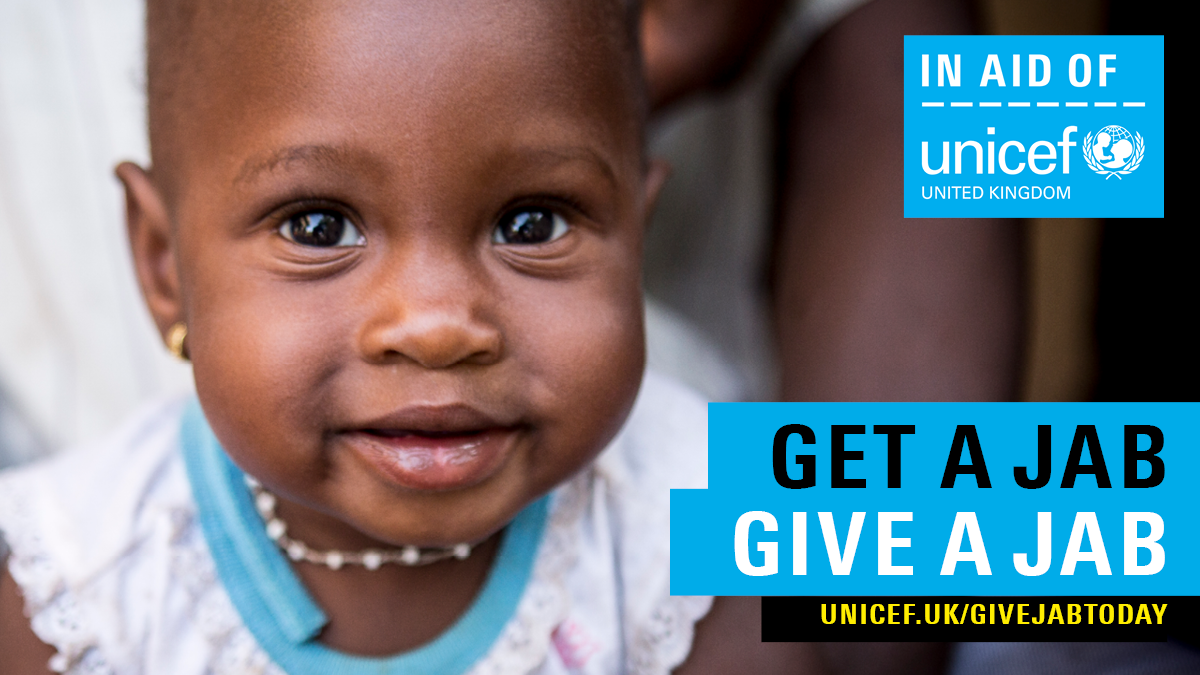 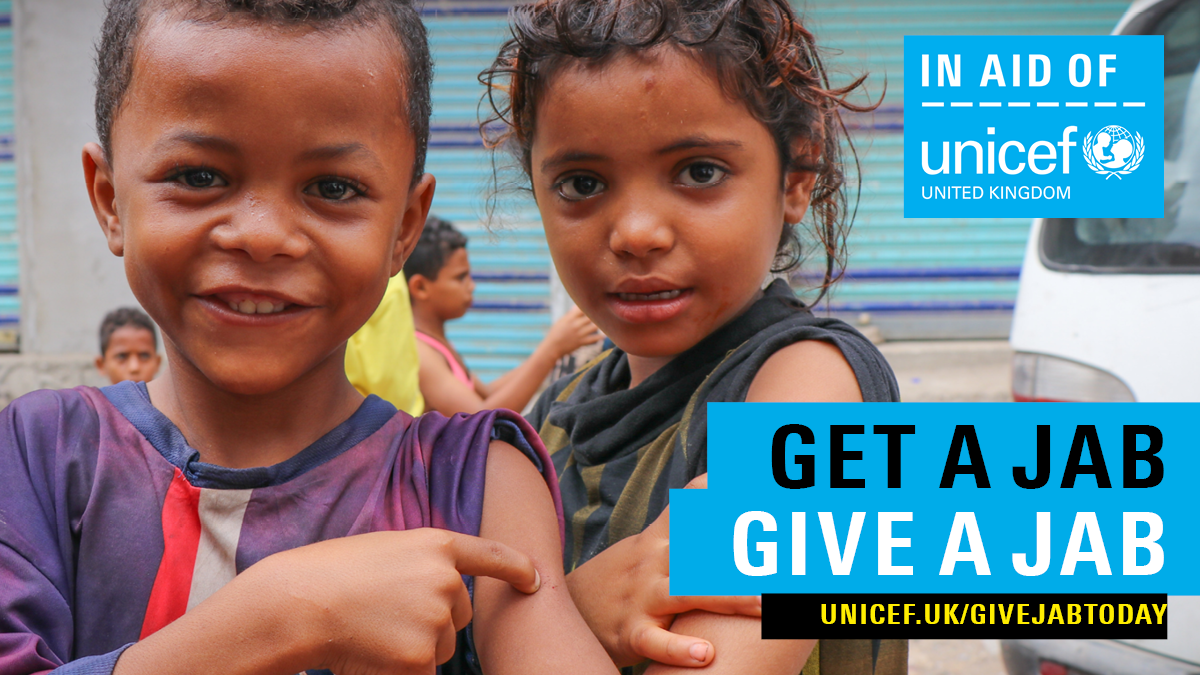 Our recent survey of health workers showed that 100% would be supportive of their trust taking part in the campaign, with 85% ‘strongly supportive’. NHS staff felt that supporting a charitable cause was not only a good thing to do morally, but it was also important to support vaccination programmes and health education in other parts of the world.

To support the campaign, Unicef have created a set of resources to help trusts promote their involvement. On signing up, trusts receive a downloadable resource pack that includes statistics for press releases and internal communications, vaccination pricing and details on how the money raised will be spent to protect children in the most hard to reach communities. Trusts will also receive a downloadable promotional poster and example social media posts they can use to drive their campaign online and a certificate in the post at the end of their campaign to thank them for their involvement and to celebrate staff participation. This is a great way to keep the flu jab top of mind though positive and inspirational messaging on the impact that getting their flu jab has on vulnerable children around the world.

Thank you to all the NHS trusts and staff taking part in the campaign this year. Together we can help prevent these diseases and keep people safe.

NHS staff felt that supporting a charitable cause was not only a good thing to do morally, but it was also important to support vaccination programmes and health education in other parts of the world.

Bev Allingham, chief deputy nurse at University Hospitals Plymouth NHS Trust, highlights how her trust gets involved in the campaign.

This is now our third year of running Unicef’s Get a jab, give a jab initiative at University Hospitals Plymouth and we continue to see it as a key component of our annual flu campaign. For every one vaccine taken up by our staff, we donate an equivalent of ten tetanus jabs to the programme, up to 24,000 vaccines.

Whilst we know getting your flu jab is very much a personal choice, we do know some staff will be undecided about whether they choose to receive their vaccine or not. Our support for Get a jab, give a jab is used to help reinforce our important messages - how dangerous the flu can be in a healthcare setting, for both our patients and colleagues, and the efficacy of the vaccination against the recognised strains we see in the UK.

Whilst we present some of this messaging in key facts and figures, we find that the Get a jab, give a jab initiative has helped us to appeal on an emotional level and change the tone of our communications to staff. 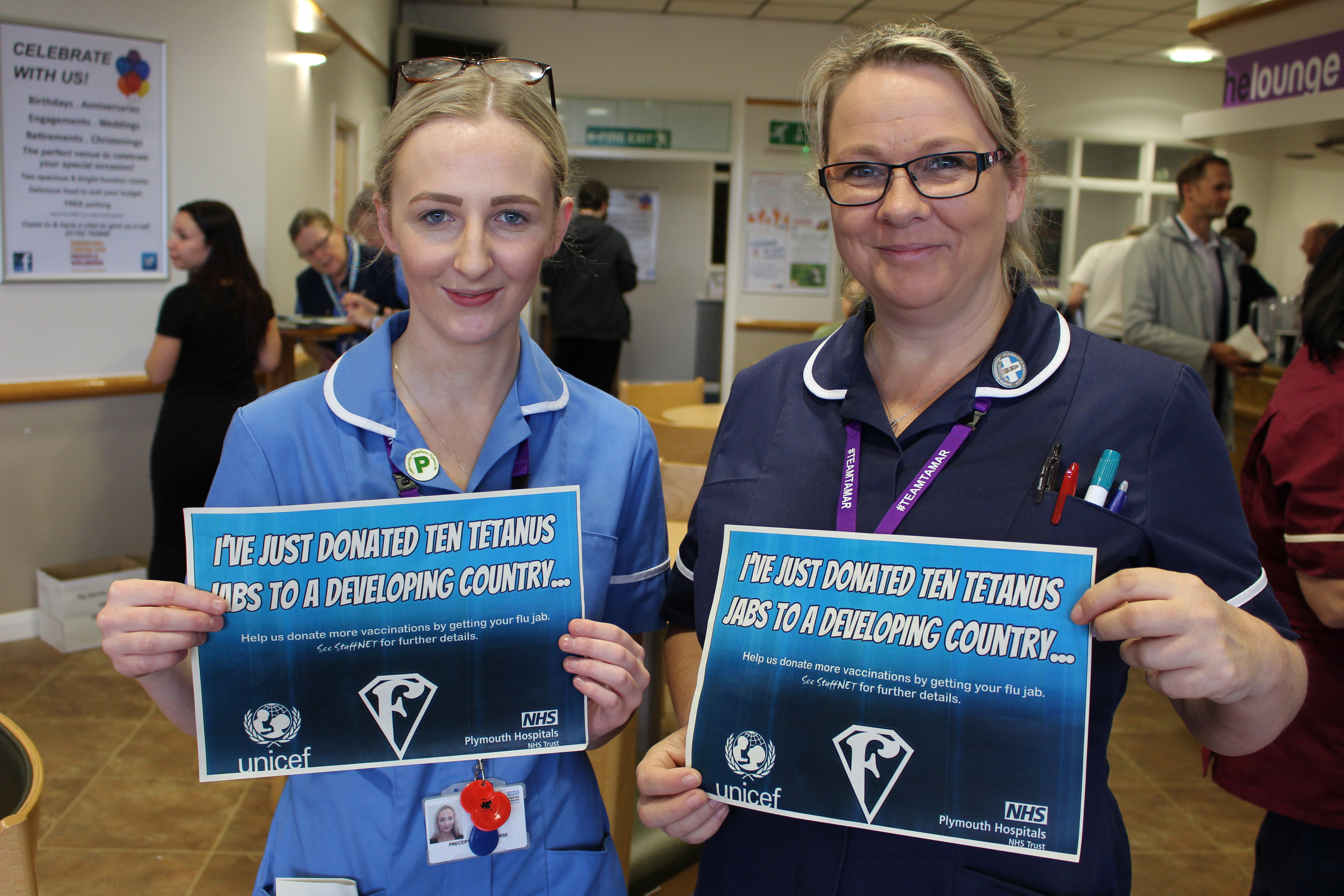 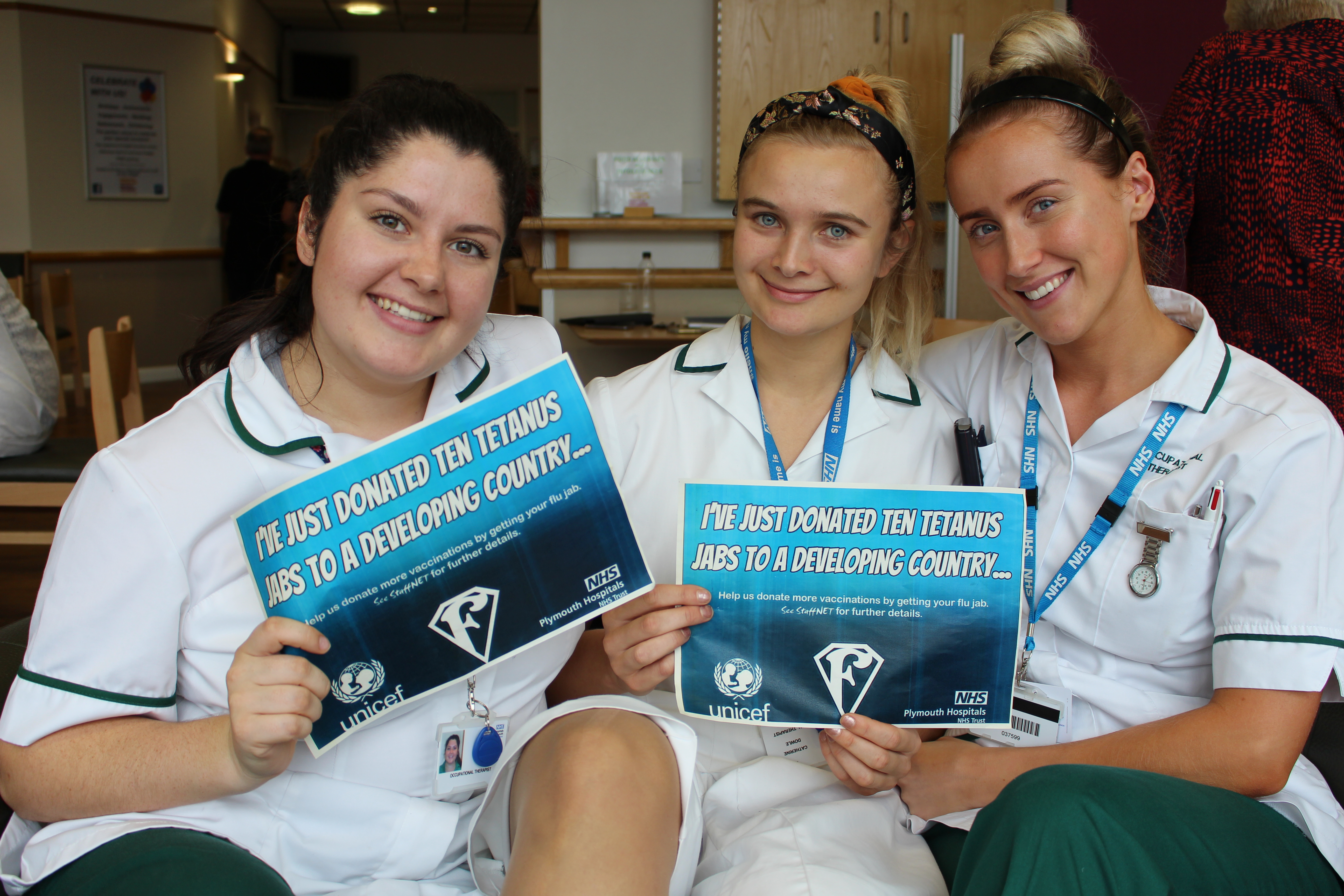 To kick off our campaign each year, we hold a flu launch in which we see over 500 people attend to have their jabs at a social event. We encourage staff to appear in photos and videos holding the campaign posters we have designed to help promote the message. It acts as a symbol for them to recognise the contribution they’ve made to keeping our patients and colleagues safe from the flu, but also to raise awareness that the initiative supports expectant mothers and children in developing countries. Tetanus is a disease that can kill.

Last year we vaccinated 58% of our frontline staff. This year, we have already surpassed that total, and hope through the continued promotion of Get a jab, give a jab and our other initiatives, we can vaccinate more in the coming months. While we can’t attribute direct impact from the campaign to our overall vaccinated figure, we know that from anecdotal feedback and the positive sentiments we see on social media from our staff, it does have an impact and people feel good about their donation.

Our campaign message at University Hospitals Plymouth is this, protect yourselves, protect your patients, protect your family – Get a jab, give a jab will continue to be an important part of the discussion with this sentiment in mind.

Our campaign message at University Hospitals Plymouth is this, protect yourselves, protect your patients, protect your family – Get a jab, give a jab will continue to be an important part of the discussion with this sentiment in mind.

It’s not too late for your trust to sign up to our campaign. Boost your 2019 flu campaign  by visiting Unicef's website.

If you would like to be notified when next year’s campaign launches, please email Unicef.

Responding to the latest monthly combined performance data from NHS England and NHS Improvement, and the first week of winter reporting data, the director of policy and strategy at NHS Providers, Miriam Deakin said:

"We are facing a very tough winter. The question now is how severe and what toll it will take on patient care and staff.

"This follows an extremely busy November, with the service once again recording the worst performance against the four hour standard on record and the number of people waiting for routine surgery and treatment growing to 4.4 million. Performance continues to fall against key standards despite NHS front line staff working harder than ever to see more people.

"The first week of formal winter reporting already shows emergency care is under significant pressure. Hospital beds are as full as they were for nearly every week of last winter, and the delays in handing over patients from ambulances tell a similar story.

We are facing a very tough winter. The question now is how severe and what toll it will take on patient care and staff.

"It is clear we’ve seen an early spike in flu, while others have been battling norovirus cases, which are already double the levels we saw last year. This potent mix coming up against an already overstretched service will mean tough choices over winter. While systems are coming together and have prepared extensively, without additional social care places and community-based care the pressure on NHS services will continue to rise.

"An extremely difficult winter for the NHS will be one of the immediate challenges facing the new government. We need to be realistic and honest about what needs to be done to close the capacity gaps that have been allowed to open up in the workforce, services and beds.

"We need to see answers to some of the big questions ducked in this election campaign - that means putting social care on a sustainable footing, acting immediately to reduce staff vacancies and ensuring the NHS has the investment it needs for its infrastructure to meet the needs of the population of the 21st century."