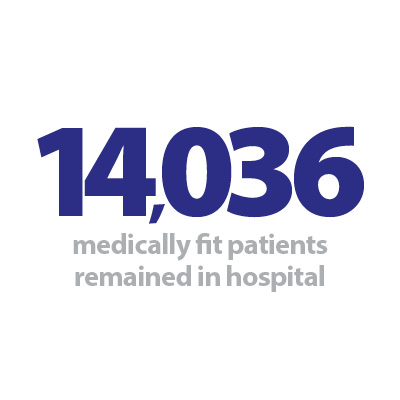 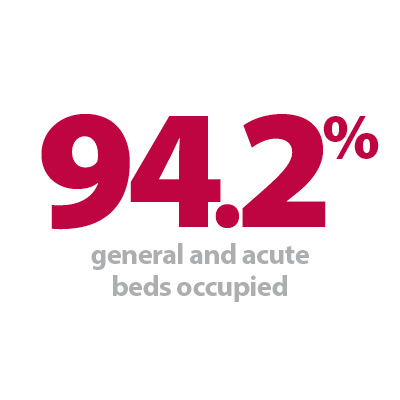 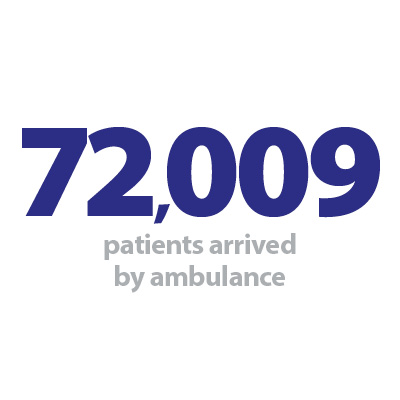 Today NHS England published another release of its weekly winter situation reports, providing a snapshot of activity across emergency care and hospitals from 9 to 15 January.

As seasonal illnesses continue to take a toll on services, this week's data once again highlights trends observed the week before, with trusts across England under immense pressure. Bed capacity remains high and we are still seeing challenges with patient flow. That said, we are seeing some encouraging albeit small reductions in some of the figures, particularly ambulance handover delays.

Ambulance arrivals: A total of 72,009 patients arrived by ambulance in the latest week, roughly the same number as last week (-20). This is, however, a decrease of 13.8% compared to last year.

Discharges: There were an average of 23,671 patients each day who no longer met the criteria to reside, an increase of about 5% (1,068 more). A slightly smaller proportion of patients remained in hospital this week, with 59.3% (or 14,036) staying in hospital, a slightly smaller figure compared to 62.2% the week prior but roughly the same number of patients.

G&A beds: There were an average of 102,230 G&A beds open each day – 5.7% higher than the same time last year (5,558 more). On average each day, 236 beds were unavailable and void to non-COVID infections. Average bed occupancy remains high at 94.2%. This is an increase of 2.6 percentage points compared to the same week last year.

Respiratory syncytial virus (RSV): An average of 47 paediatric beds were closed this week due to RSV symptoms, down from 65 last week but up considerably from eight last year.

This week's data is once again showing concerning levels of bed occupancy, despite small decreases. Even though we have more adult G&A beds available this year compared to the same week last year, a higher proportion (nearly 19 in 20) were occupied, showing how demand continues to be high in trusts across the country.

We continue to see equally worrying figures in delayed discharges, with nearly 60% of patients medically fit to leave remaining in hospital, once again highlighting system wide pressures across health and social care.

Some encouraging figures were also registered this week, particularly a reduction in ambulance handover delays and fewer staff absences. We are also seeing another reassuring reduction in the number of beds occupied by flu patients; however, this figure is remarkably higher than the one observed last year, highlighting another challenge exacerbating what has been an incredibly difficult winter so far for trusts.

Re-setting the media narrative about the NHS this winter

Matt Akid, director of communications and engagement at Oxford University Hospitals NHS Foundation Trust, explains why the trust worked with clinicians, patients and the BBC's Panorama team to re-set the media narrative about the NHS this winter.

The media narrative about the NHS this winter has been unremittingly grim – ambulances queuing outside hospitals up and down the country, patients facing long waits in emergency departments, and nurses and paramedics on picket lines have been the defining images of the news cycle.

There is no doubt it has been a hugely challenging winter so far for everyone working in health and social care – and it's certainly a picture we recognise at Oxford University Hospitals NHS Foundation Trust (OUH).

OUH spent almost two weeks on OPEL 4 – the highest level of operational pressure – over the Christmas and New Year period and we were among the NHS trusts to be impacted by the first two days of Royal College of Nursing industrial action on 15 and 20 December.

There is a real and present danger that the tsunami of negative headlines, a narrative in some quarters that the NHS is 'broken', and politicking from all sides will not only erode public confidence in the service but also negatively impact on the morale and wellbeing of staff. Could it also have the knock-on effect of making health and social care jobs less attractive for potential new recruits and for young people considering their future career options, thus exacerbating the current workforce pressures?

In this context, the role of communications teams within the NHS has never been more important in not only communicating key information to staff – including cost of living and wellbeing support – and engaging with them to understand how and what they want to know but also exploring opportunities to work with staff and patients to tell their stories to a wider audience.

Engaging with the media, developing content for social media channels, and working in partnership with communications colleagues across not only the NHS but also social care and the voluntary sector – to reflect system working – are all ways of harnessing the pride of staff about what they do. It can also create content which is grounded in the reality of how staff are constantly innovating to find new and better ways of working and what this means in reality for patients and their families – not sugar coating the challenges faced by the NHS but reflecting better most people's personal experiences of the health service, which are not often represented by the media narrative.

There are always risks associated with any media work and so part of the role of communications professionals is to weigh up the pros and cons and to make judgement calls while carefully evaluating the reputational impact on our individual organisations and on the NHS.

Another consideration is the time commitment required from communications staff and clinicians, and whether this is justified by the impact, while acknowledging that there is never any guarantee how stories may end up being represented. Here at OUH we worked with the BBC's Panorama team in December who filmed both at the John Radcliffe Hospital in Oxford and in patients' homes as they explored the work of our ambulatory assessment unit and the Hospital at Home team for their The NHS crisis: can it be fixed? programme – broadcast on BBC One on Monday 16 January.

This was co-ordinated by George Welch and Susan Brown in our communications team, working closely with clinicians including Professor Dan Lasserson and Dr Jordan Bowen, and patients and their families who allowed the BBC into their homes to film.

It was made possible by our chief executive officer, Professor Meghana Pandit, who supported the filming as an opportunity to make a wider audience aware of the innovative work being done in Oxfordshire to enable more people to receive acute hospital standard care in their own homes – we are grateful for her vision and support. We were also grateful to the Panorama team for a positive and fair representation of our teams' work, shining a light on how tests and assessments which would traditionally be undertaken in hospital can now be done in people's homes.

The response to the programme has been positive – it definitely gives staff a lift to see their work given a national profile and many of the comments on social media reflected not only public support for the NHS but also the appetite for patient and staff stories which aren't all doom and gloom.

More than 1 million people watched live, and it is available on BBC iPlayer – please do spread the word!