Since last year's survey, NHS Improvement has gone through a period of significant change. NHS England and NHS Improvement have entered joint working arrangements, resulting in changes in the senior leadership teams within both bodies, and have established seven new integrated regional teams. The two organisations have reinforced this joint approach through the development of a new NHS oversight framework, bringing together the SOF for providers and the CCG IAF. This signals significant change in the way local NHS organisations are held to account - reinforcing that collaboration across organisations and local health systems is now the national policy priority.

NHS Improvement's planning guidance for trusts reflects the expectations set out in the NHS long term plan for operational and financial planning to increasingly take place at a system level, through STPs and ICSs. For the first time this year, all STPs and ICSs have also been asked to agree a system control total, in addition to the process of setting organisational control totals for trusts.

NHS Improvement also made changes to the provider sustainability fund (PSF) this year - it established the financial recovery fund (FRF) and transferred £1bn of PSF into the urgent and emergency care tariff. The FRF is only available to providers in deficit who sign up to their control total.

With the NHS struggling to meet performance targets and facing ongoing financial challenges, the tendency among the national bodies has been to adopt a firmer grip over the NHS, leading to a top-down, performance management approach over organisations and, increasingly, over local systems.

Despite this, NHS Improvement has continued this year to reposition its approach towards one which prioritises support and enabling sector-led improvement. As in previous years, our survey sought to identify whether this shift is being reflected in the experiences of trust leaders.

We asked trusts to indicate whether they agreed with the statement “the decision making for our segmentation in the single oversight framework is clear”. The majority of trusts agreed (67%) while 18% disagreed. There was a noticeable difference in opinions between sectors: non-acute trusts were more likely to agree that the decision making for segmentation is clear (78%) than acute trusts (61%). 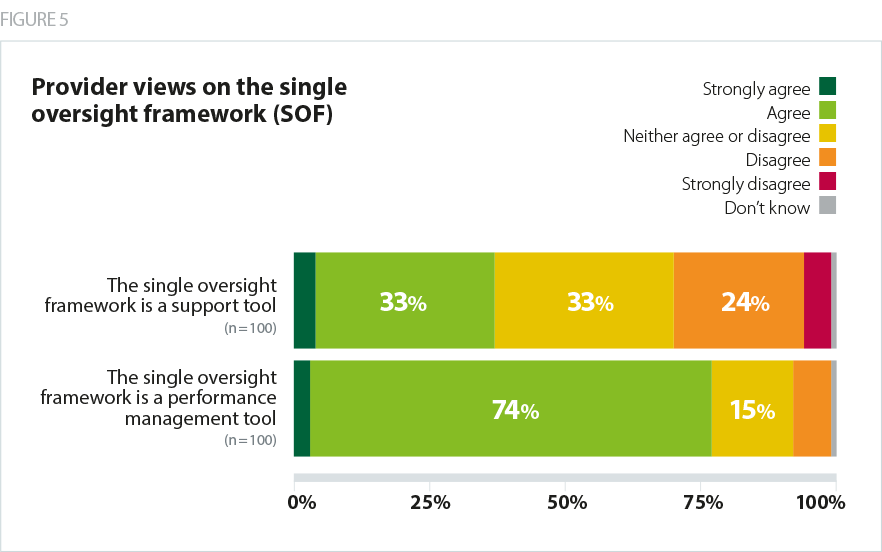 We understand the SOF but it’s not yet about improvement is it?

Reasons for moving segmentation [were] unclear.

Trusts regularly report that oversight and regulatory frameworks, along with support for improvement, tend to be more appropriate for the acute sector. The survey results this year suggest this view continues to persist, although there appears to have been some improvement since last year: in 2018, 51% of respondents agreed with the statement "NHS Improvement support has been appropriately tailored to out sector". This year, 58% agreed. However, it is telling that acute trusts were more likely than non-acute trusts to agree with the statement (68% vs 42%).

Balance between autonomy and support

There was also an improvement this year in the proportion of trusts that agreed with the statement "NHS Improvement strikes a good balance between respecting trusts' autonomy and support in its approach to overseeing providers". This year, 58% of trusts agreed with the statement, compared to 47% in 2018. Consistent with last year's results, views were more positive among non-acute trusts, who were more likely to agree that NHS Improvement strikes a good balance (67%) than acute trusts (53%).

This year we made changes to the way we ask trusts how well the regulators have coordinated with other national bodies. In previous years we have asked about coordination across the regulators generally - this year we asked for views on each regulator in turn.

Almost half of trusts (49%) told us they felt NHS Improvement had coordinated its activity effectively with other regulators at a local level. At a national level, only slightly more than a third of trusts (36%) said that NHS Improvement had coordinated effectively with other regulators. There was a large response to 'don’t know' (37%). 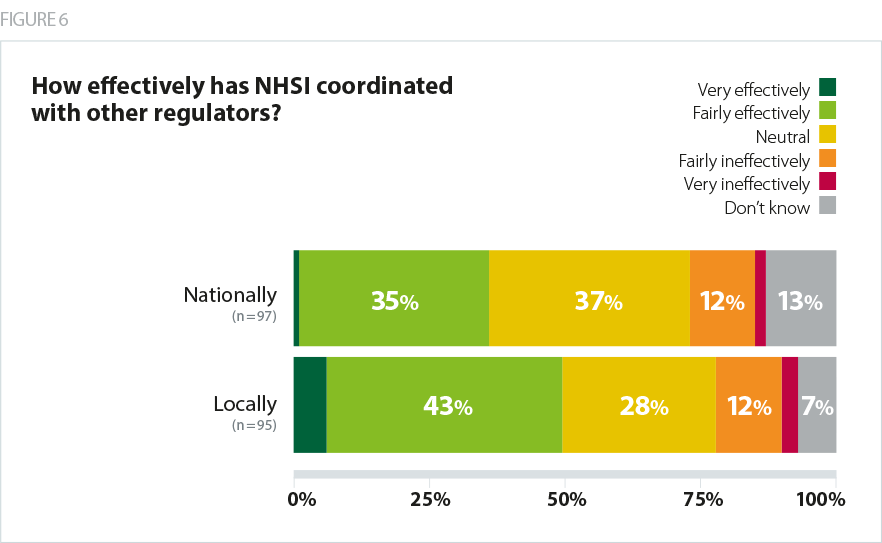