In 2018, the NHS England and NHS Improvement boards published plans to increase joint working between the two organisations. As the national bodies continue to ask local health and care systems to move to more joined up ways of working, NHS England and NHS Improvement, broadly representing the commissioning and provider sectors respectively, recognised that they must do likewise.

The two leadership teams have been brought together through a new NHS Executive Group, while seven integrated NHS England and NHS Improvement regional teams have been introduced, each led by an RD. Each of these seven teams is responsible for working with local health systems, and their constituent CCGs and provider organisations, to provide oversight and support for improvements in quality, health outcomes and use of resources.

At the time of surveying, NHS England and NHS Improvement were developing their new joint working arrangements and there had been a period of change and uncertainty for providers. Since their appointment, and since we surveyed trusts, the RDs and their teams have been developing their operating models, processes and ways of working. They have carried out considerable work to engage local providers and partners in these activities. Our survey gives a snapshot of the aspirations and concerns trust leaders hold about the new model, but we recognise that the picture is likely to have shifted even over this short period of time.

Work is also underway within NHS England and NHS Improvement to identify which functions should sit with national teams and which should sit with the new regional teams, and which responsibilities should be held by the national executive directors and which should be delegated to the RDs. For the provider sector, it is essential that there is absolute clarity on lines of accountability and processes. This will ensure trusts are not subject to duplicative requests or interventions from both national and regional teams, that there is consistency in messages from both national and regional teams, and that processes are as efficient and easy to navigate as possible.

NHS England and NHS Improvement coming together feels encouraging but it is too early to say how that will affect the framework.

We asked trusts to share their views on the risks and opportunities of the closer working between NHS England and NHS Improvement. There is concern among some providers that in coming together, NHS England and NHS Improvement will become a very large, single central body with a lot of power. Some trusts suggested this could lead to a more centralised, top-down approach and a dilution of the autonomy of local organisations. A larger central body with an expanded remit may also find it more difficult to provide tailored and specific support to providers, and some respondents commented that the specific provider-sector expertise within NHS Improvement is in danger of being lost. Respondents also warned about the loss of the valuable challenge and tension that has existed between the two bodies until now.

Trust leaders suggested that there is a danger that, despite the joint working arrangements, the two organisations will continue to operate as separate bodies, with ongoing duplication or misalignment of approaches and messages.  A number of trust leaders believe that in the short term, the changes within the organisations are likely to have a negative impact - the focus on restructuring and reorganisation may undermine existing momentum around service change and impact negatively on staff morale, relationships and efficiency within the national bodies.

Some respondents suggested that it is just as critical for the two bodies to focus on culture change, shaping values and behaviours, as it is for them to focus on structural changes. This is seen as essential to moving away from a culture of performance management and monitoring to one of improvement through support.  One respondent suggested that if there is a "new culture that is built around doing the right thing for the system then there will be a real opportunity for improvement".

Respondents highlighted that bringing together NHS England and NHS Improvement offers the potential for more joined up thinking at the top of the national bodies, and gives them the opportunity to speak 'with one voice'. A number of trust leaders believe the new structure will be much better placed to support system leadership through providing a more joined up perspective on system working and developing shared approaches between providers, commissioners and their local partners. Trust leaders also feel the joint working presents opportunities for efficiency savings through streamlining processes and providing greater clarity on roles.

Having a clear and consistent expectation set by regulators on both the provider and commissioner side would be beneficial.

This is an opportunity for NHS England and NHS Improvement to focus on how they can add value. That means taking or supporting real action in key areas such as capital and service/organisational change where the national bodies and/or regional offices have the authority to make change happen.

It should move us to place based accountability and support. 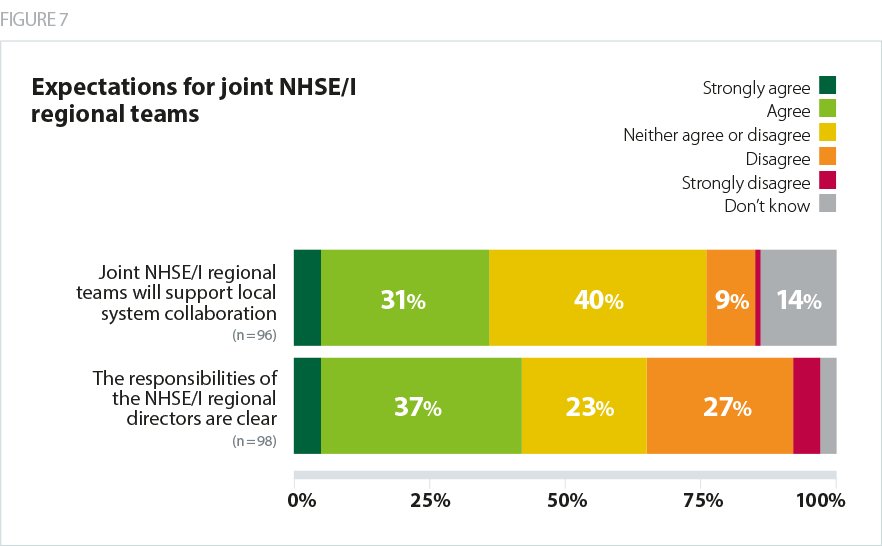 Trust leaders told us they believe the new NHS England and NHS Improvement regional teams will be better able to support whole system solutions to long-term challenges and support more effective collaboration between providers and commissioners. Trust leaders are optimistic that the joint working arrangements will result in more joined up and consistent messages from the two bodies to commissioners and providers, as well as clearer processes and easier access to support. Respondents commented that they would like to see the regional teams taking timely action to support local organisations, and use their authority to drive improvements, rather than focus on assurance and oversight.

Some respondents pointed out that there remains a lack of clarity over the distinction between the roles and responsibilities of RDs and those of STP/ICS leaders. There is also variation in the approaches being taken by RDs: some felt that there is a danger the RDs may take some power away from local system leaders and may impose directions from above rather than allowing or facilitating local systems to make decisions collectively.

We need clarity on the relationship between NHS England and NHS Improvement and ICS roles and responsibilities. We need to ensure that we do not replace two regulatory organisations with a different two.

[Regional directors] must be given real authority. They will only be able to add value if they are allowed and encouraged to act independently to secure improvements in their regions.

Others were optimistic that the RDs will be able to offer neutrality and objectivity which may help with working through thorny, long-standing issues in local systems. They pointed out that the new regional structure offers an opportunity for the RDs and their teams to develop closer relationships with local leaders and develop a greater understanding of local challenges and priorities. The RDs can also act as advocates for their regions at a national level.

The most common response among trust leaders was that it is not yet clear how the new regional teams and directors will benefit their trust. In the time since we surveyed trusts, NHS England and NHS Improvement regional teams have carried out significant programmes of work to develop relationships and ways of working with local providers, commissioners and other partners. We look forward to repeating this survey next year to explore how the new regional structures have bedded in, and the benefits that have been delivered in practice.

I have a good relationship with my regional director – I am afforded autonomy but feel supported.

[Regional directors] need to ‘walk in our shoes’ to truly understand the pressures we are dealing with.