NHSE/I's system oversight framework (SOF) for 2021/22 was the first to incorporate ICSs alongside trusts and clinical commissioning groups (CCGs). It aims to balance an objective set of measures for effective system oversight, and a degree of flexibility to account for local circumstances. As with previous SOFs, it places trusts and systems into four segments, introducing a new national recovery support programme for systems, trusts and CCGs in segment 4.

The framework was built around the five national themes from the NHS Long Term Plan (LTP):

The SOF is applied by the use of a single set of metrics, which apply equally to ICSs, trusts, CCGs and primary care. These metrics are aligned to the five LTP themes.

As mentioned earlier in the report, NHS England has recently published its refreshed SOF for 2022/23, and is preparing a comprehensive review of the framework for 2023/24.

We asked members for their views on the 2021/22 oversight framework. An overwhelming majority of respondents (80%) supported NHSE/I's intention for an approach which enabled trusts to collaborate in a system context. Almost three quarters of respondents (74%) were also supportive of NHSE/I's oversight metrics for 2021/22. 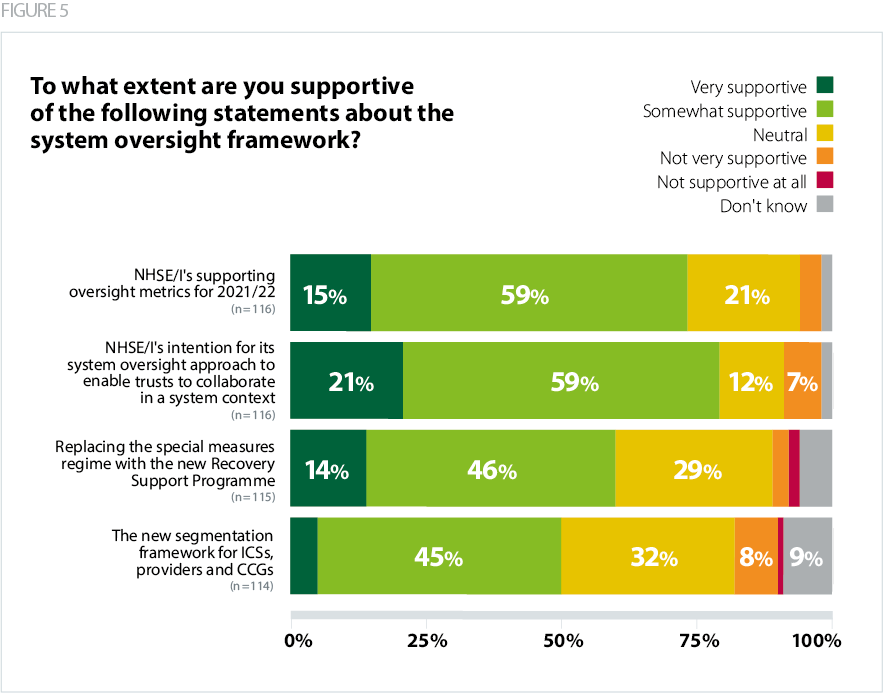 A key issue for respondents was how oversight will work in practice. Some pointed out that there were too many metrics, that these overlapped, or that there was not sufficient detail in the framework to understand how it would operate.

Although supportive of NHSE/I's aims and the direction taken in the SOF, the survey showed a gap between the intention of the policy and how it is experienced locally. While an overwhelming majority (71%) perceived the SOF as a performance management tool, only a third (33%) saw it as a support tool.

Comments on the SOF and NHSE/I's approach revealed the following key themes:

The NHSE/I local team have a different approach to the national team. The local team seem more supportive. Its too early to say how this will all pan out as we recover from COVID. Also what will the role of ICS be in this space. Are we now going to be held to account by CQC, NHSE locally, multiple ICB's and the national
team. Seems overly bureaucratic and very expensive to me.

NHSE/I SOF system is now totally opaque - based on feelings not data - not equitable based on outcomes. Very unclear what criteria are to move between SOF levels. And new SOF was intended to be broader but the reality is that NHSE only concerned with a very narrow range of performance measures.

There needs to be better alignment between NHSE's regulatory framework, the core purposes and objectives of ICSs etc. Too many overlapping objectives and poor strategic alignment, which in turn leads to poor regulation.

The criteria to evidence the segmentation decisions requires additional clarity. For our own SOF, there are metrics being utilised that are not relevant to the organisation and yet are being used to assess our performance.