In the past 12 months operational pressures in the NHS have intensified. The pressures have affected all sectors, with backlogs of care, high levels of demand in urgent and emergency care, significant issues with discharge, and ambulance handover delays, compounded by staff shortages and burnout. However, while the operational challenge has intensified, our survey demonstrates that trusts feel increasingly less confident that regulators understand the pressures they are facing, or are factoring this context into their approach to regulation
and oversight. 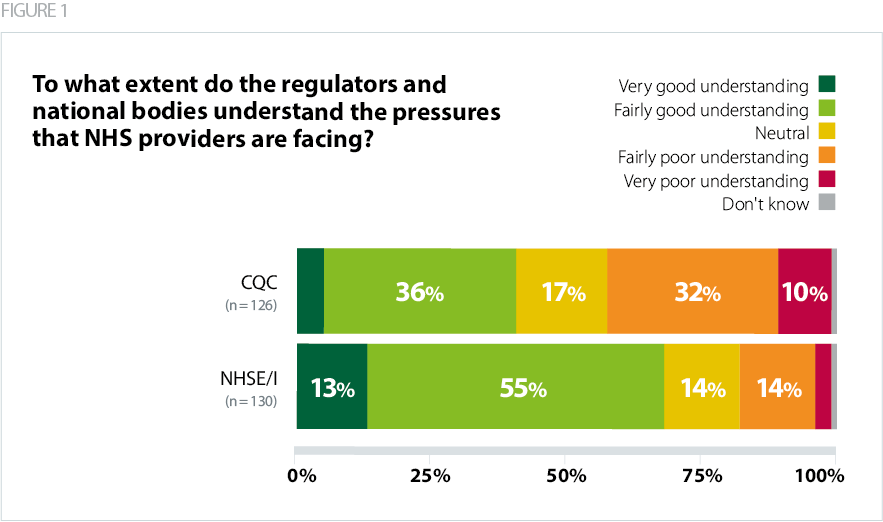 Just over two thirds (68%) of respondents said NHSE/I had a good (very good or fairly good) understanding of the pressures NHS providers are facing. This compared with 74% in 2019, and 75% in 2018. Those who thought the regulator's understanding was poor (very poor or fairly poor) have increased to 17% this year, as compared with 14% in 2019, and 12% in 2018 (please note this question was changed slightly in the 2020 survey to reflect views before and during the pandemic so is not directly comparable to other years).

It is worth noting that responses varied by trust type. Ambulance trusts (84%) and combined acute and community trusts (86%) were most likely to feel that NHSE/I had a very good or fairly good understanding of the pressures. That compared with only 57% of mental health/learning disability trusts who felt the same way, and 35% rating its understanding as poor. 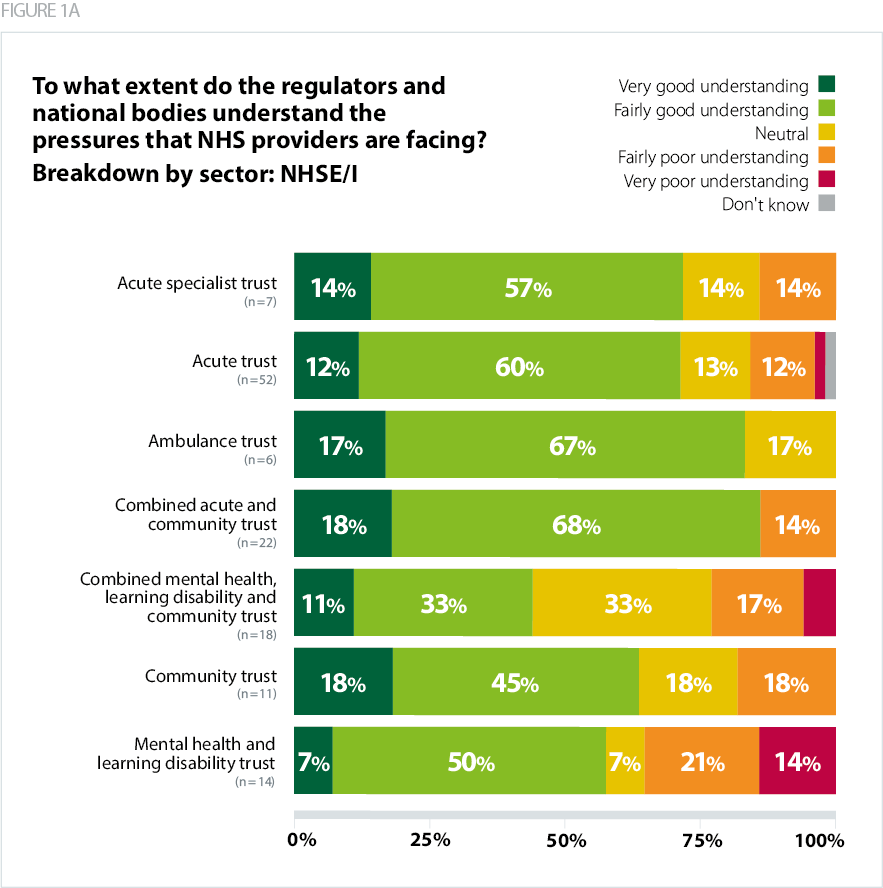 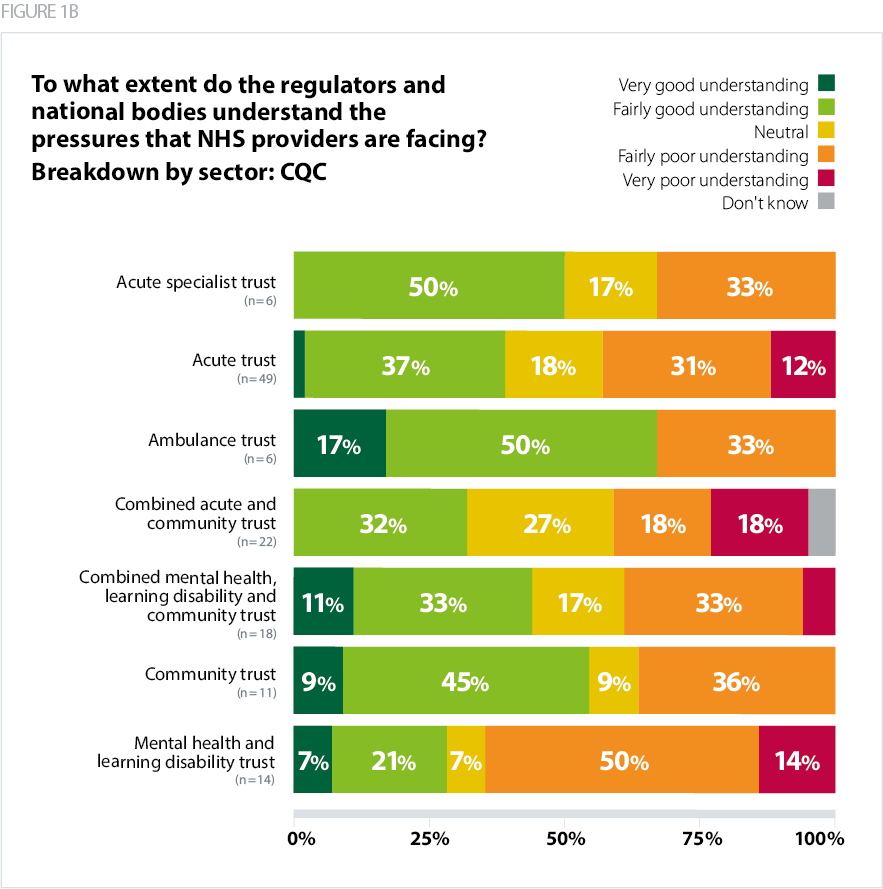 In similar vein, we have seen deterioration in trusts' perceptions about the burden that regulation places on them. We asked providers whether they thought the regulatory burden and the number of ad hoc requests from regulators had increased, decreased, or stayed the same during the past 12 months. These findings measures the perceived combined burden of regulation from CQC and NHSE/I.

Trust representatives have consistently commented on the increasing burden of regulation, and the confusion of responsibility and reporting lines in the new system architecture. Beyond the increasing burden, trust leaders also raised concerns about the approach taken by NHSE/I, relating both to behaviours and increasingly complex lines of reporting.

The arrogance and bullying continues to get worse.

Not only have the number of requests increased, but now they are coming from multiple levels, ICS, region and national.

Comments were also made on the lack of clarity and focus in regulation, as well as a perceived emphasis on auditing and control, ahead of driving improvement. There was a feeling that the acute sector was much better understood than the mental health or community sectors.

Trusts expressed specific concerns about multiple and duplicative requests from regulators, and their unrealistic expectations. These stemmed from insufficient alignment between regulators, and added to the regulatory burden.

In their comments to the survey, and in conversations we have held with them over the past year, trust leaders describe a disconnect between the approach and messaging from regulators at a national level, as opposed to locally or regionally. For example, there were comments around NHSE/I's regional teams being more understanding and supportive of challenges trusts experience than its national team. Conversely, there was support for CQC's national-level narrative around consistent, risk-based regulation, but trust leaders contrast that with the approach taken by CQC's local inspection teams.

A common theme in members' comments was the feeling that regulators have not been sympathetic enough to the COVID-19 situation and the ongoing pressures the provider sector is facing. For example, some commented that CQC inspectors were not willing to listen to staff sharing their concerns about workforce pressures and delayed transfers of care related to the pandemic, which were having a serious impact on services. They felt that the context had not been sufficiently reflected in CQC's inspection judgements.

There needs to be more recognition of the context we are operating in. Not a dilution of standards, but the reasons as to why these may not be being achieved need to be better understood and reflected in any inspection/reports.

The themes discussed above are clearly reflected in Figure 2, which explores specific statements about regulators' current approach.

I understand the need for information and regulation, but it's growing disproportionately to any benefits this brings. 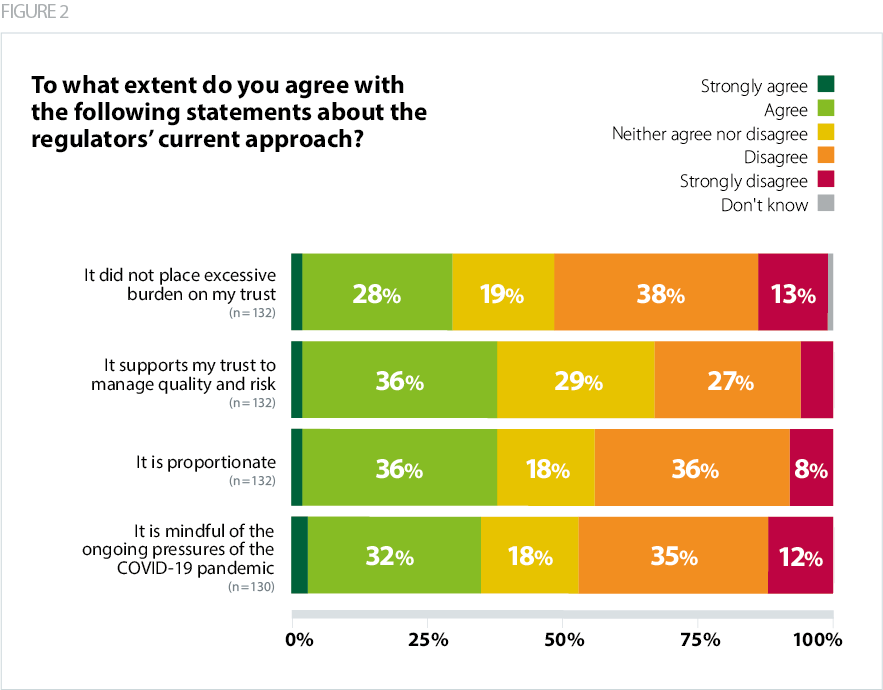