Measures put in place by both regulators at the start of the pandemic were designed to reduce regulatory burden on providers during the peak of the first wave, and the majority have continued in some form throughout the past year. For example, CQC implemented the ESF and is now using a transitional regulatory approach to monitor and respond to risk as the pressures on trusts vary, while it develops its new strategy for 2021 and beyond. Similarly, NHS England and NHS Improvement announced changes to its oversight regime in the first wave with the objective of reducing regulatory burden and freeing up leadership and operational capacity.

Despite these measures, views from trust leaders about how proportionate both regulators' approach has been throughout the pandemic are mixed. The majority of respondents (60%, 28 respondents) said that the approach taken by the regulators during the pandemic reduced burden although only four trusts (9%) strongly agreed with this statement (figure 3). Just under half (47%, 22 respondents) felt that the regulators' (NHS England and NHS Improvement and CQC combined) approach during COVID-19 had been proportionate. 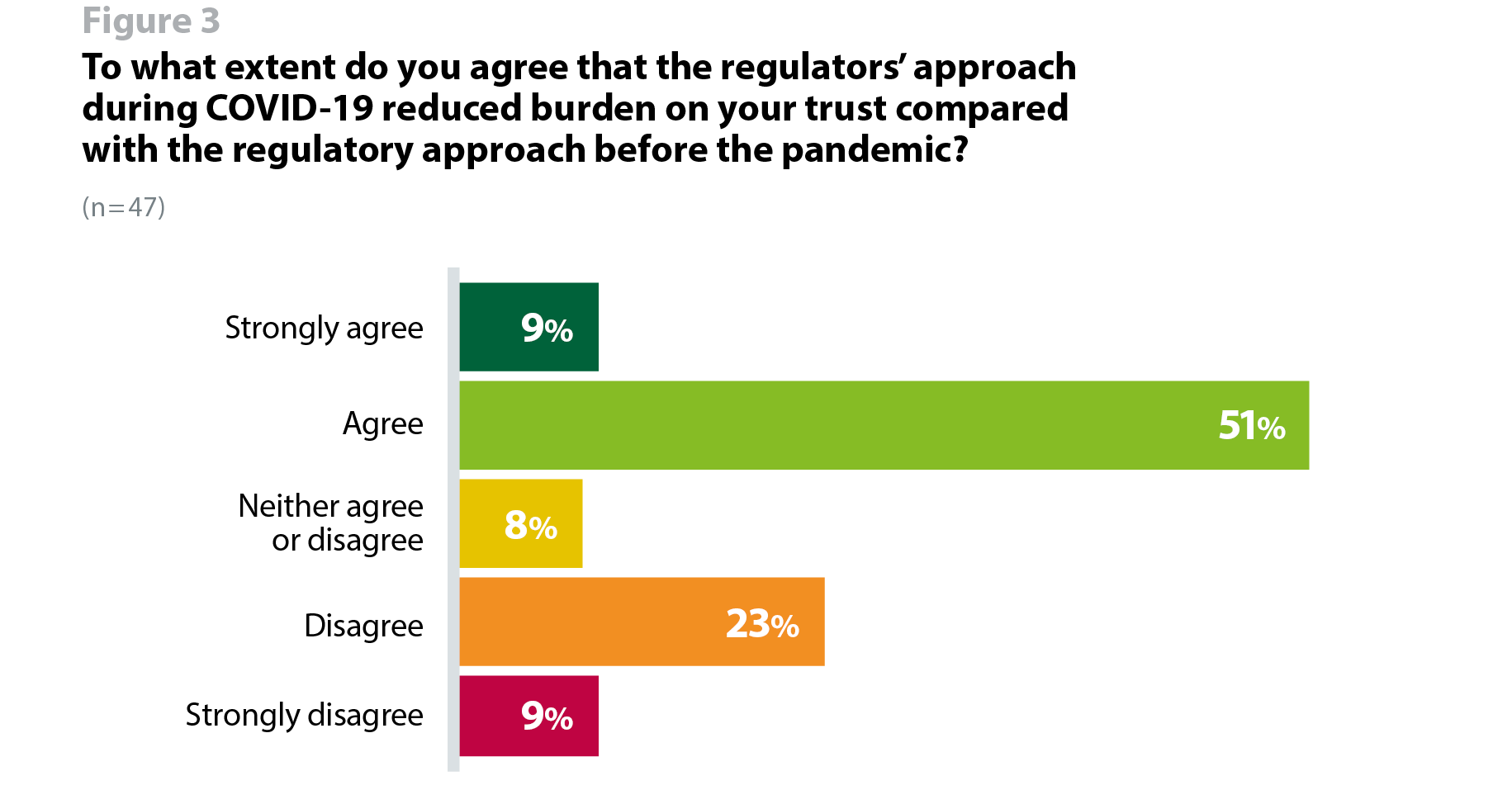 Pre-COVID both CQC and NHS England and NHS Improvement were highly demanding and impatient data hungry beasts. Since the pandemic they have largely been less intense and more understanding of operational pressures, certainly in the first phase. Latterly there has been more regulatory demand, particularly from CQC, NHS England and NHS Improvement local teams have all been redeployed so any return to previous operating models would be less than helpful. Role not specified, acute trust

Oversight was reduced during the first wave which helped but during the second wave it has been increased and it is a nightmare.

A review of qualitative comments throughout the survey, and wider feedback received from our membership suggests that trust leaders' views on the regulators' approaches evolved during the year, from a point of greater support in the first wave, to more mixed views as activity picked up over the summer and going into the second wave.

Regarding my assertion of 'fairly poor understanding', this is specifically about the volume of data and information requests both as part of and outside of inspection processes, and the deadlines / timeframes set for these, which can be very unrealistic and disregard reality for most trusts.

The amount of information required to be shared with various forums during the extremely busy COVID -19 pandemic period has created more pressure on the organisation.

The survey results suggest a perception that the regulators do not necessarily have a strong enough understanding of the impact of the COVID-19 pressures. This has manifested in numerous ways, with some trusts feeling that the impact of measures to reduce burden had not been felt as strongly as intended. Feedback also suggests a sense that while many of the regular reporting requirements were helpfully suspended, new requests were onerous or duplicative.

During the pandemic NHS England and NHS Improvement relaxed the reporting arrangements which was very helpful. However, they very quickly reverted to huge amounts of data collection and have not shown that the lessons have been learnt from COVID-19.

The centrally dictated reporting requirements during the pandemic have been onerous, sometimes conflicting, sometimes not fit for purpose, often required within ridiculous timescales and have not been supported by effective IT systems.

We continue to advocate for the national and regional teams within NHS England and NHS Improvement and CQC to maintain regular dialogue with trusts to understand the pressures they are under. Where this has taken place, trusts are positive about the impact of the support they receive.