The context of COVID-19

At the beginning of the COVID-19 pandemic, NHS England and NHS Improvement issued
a letter to providers setting out a series of changes to the way they would oversee trusts' activity by relaxing annual reporting requirements, streamlining national programmes, and reducing the volume of central data collections, including those related to delayed transfers of care, mixed-sex accommodation breaches and figures for operation cancellations.

Trusts reported a moderate level of interaction with NHS England NHS Improvement during the pandemic, with around half (49%, 22 respondents) saying that their level of interaction was 'medium', and 38% (17 respondents) saying it was high. There is likely to be some variation regionally based on the approach taken by regional teams, by sector, and according to the level of pressures faced by the trust related to COVID-19.

The majority (82%,42 respondents) of trusts said that NHS England and NHS Improvement understood the pressures trusts were facing before the start of the pandemic, with 20% of these saying that they had a 'very good' understanding. During the pandemic, three quarters (73%,37 respondents) said that NHS England NHS Improvement had a very or fairly good understanding of the pressures they faced in managing coronavirus and other demands (figure 11). Comments suggest that the drop in the number of trusts saying that NHS England and NHS Improvement understood pressures during the pandemic is partly driven by trusts' experience of the focus on recovering services, and some confusion around lines of reporting with ICSs playing a role alongside the NHS England and NHS Improvement regional teams in monitoring the local situation. Trusts also commented on the impact of a centrally driven response, and the difficulties of keeping up with regular changes to information and guidance, which does not always align with regional messaging.

Regional NHS England and NHS Improvement team has been asking for the impossible in terms of performance on backlogs etc. Lots of sticks and few carrots. Also very centrally driven, so during the pandemic there have been many changes to messaging and requirements.

In previous years of the survey, trusts agreed that NHS England and NHS Improvement would need to develop models of oversight to support system working and hold systems to account for the collective performance of their organisations. Support for this approach increased from 80% in 2019 to 90% in 2020. This likely reflects trusts' ongoing work to build relationships with local partners and integrate care, and in anticipation of new legislation, further recognition of a need for systems of oversight and regulation to keep pace with work taking place at a local level to work more closely with partners.

As system working and local collaboration progresses, trusts increasingly see a need for organisation-level oversight to take into account the context of system working. However, less than half (48%, 20 respondents) agreed that NHS England and NHS Improvement currently takes the context of local system working adequately into account in this way (figure 12). Trusts feel that this contributes to the challenges they face in contributing to system working, in which decisions made for the good of the system can have a disadvantageous effect on their own performance in the eyes of the regulators. They remain clear that there is a growing need for regulation to keep pace with policy and operational priorities, and NHS England and NHS Improvement's developing System Oversight Framework is likely to provider a clearer framework in support of collaborative working. 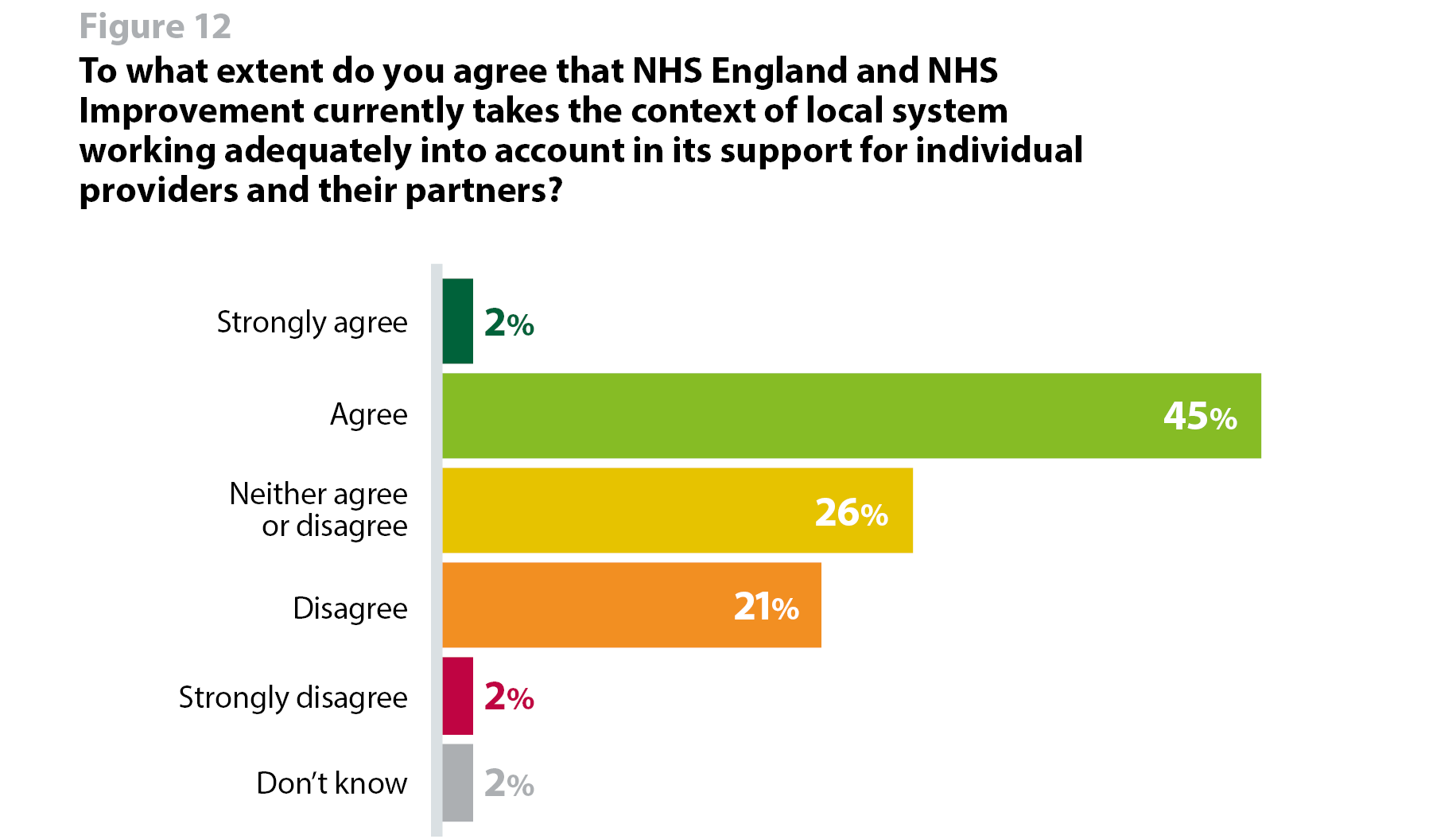 In terms of STPs/ICSs playing an increased role in monitoring performance of their component organisations, again, a large majority agreed that this should be put in place. More than four in five (83%, 34 respondents) agreed that STPs should play a role in holding their component organisations to account, although only 34% (14 respondents) strongly agreed.

The whole has to be greater than the sum of the parts and regulation and oversight needs to reflect the value of partnerships at ICS and place.

However there remains a diversity of views on how oversight and regulation should be organised in the context of system working.

For example, when asked if STPs/ICSs should take on some oversight and support functions currently held by the NHS England and NHS Improvement regional teams, around three quarters (74%, 31 respondents) agreed. However, some trusts expressed a view that any move towards formalising the role of ICSs as a performance manager, as proposed in the 'Integrating care' policy paper, should be accompanied by a proportionate reduction in the level of oversight from other parts of the system, reflecting the ongoing desire among trusts for regulatory bodies to continue to work towards reducing burden and duplication, and the need to avoid introducing ICSs as an additional tier in the system architecture without reducing the level of oversight carried out elsewhere.

There is a concern that NHS England and NHS Improvement doesn't know whether it wants to devolve responsibility/regulation or not. To devolve to systems there needs to be greater clarity about the set up on the ICS. The independence of its AO (not a CCG shoe-in). It would be reasonable to set the system the regulation and oversight responsibilities working to a framework but only if NHS England and NHS Improvement is prepared to step back and work at a strategic level and resist the urge to get into the weeds. This would also require a change of focus for the regional teams. This would support system working.

It seems clear that with the establishment of STPs / ICSs that the role of NHS England and NHS Improvement will need to change. I'm actually not sure what value they currently have other than as the financial regulator. The well-led framework is a good start but has not been particularly helpful to date - I see it as a work in progress and am hopeful it will get better."

Trusts describe a different relationship with regulators to the one they have as part of a partnership in an ICS as it currently exists – a coalition of willing partners collaborating around a shared aim. Should systems begin to play a part in local oversight and performance management, trusts anticipate an inevitable change in the relationships they hold with local system leaders as a result.

The challenge for our ICS is that it developed out of partnership but the partnership with an ICS which is a regulator will have to be different.

While system working has rapidly progressed over the past year, and further clarity about the intended future role and purpose of ICSs is emerging, until new legislation is passed, systems will remain voluntary partnerships of health and care organisations with varied levels of maturity, operating contexts and governance arrangements. For this reason, trusts urge caution in how quickly ICSs take on performance management responsibilities. With future clarity about the remit and governance of ICSs emergent, some of these tensions may resolve, but there remains a need to be pragmatic about how quickly system-focused models of oversight will be implemented.

The role of the ICS in self-managing regulation is entirely dependent on the context in which they are operating. It requires high levels of trust and transparency from the AO/chairs of the ICS and a mutual commitment to work together. There is still substantial worry about the lack of robust governance and accountability in the organisation versus the system.

Coordination with other national bodies

As CQC's strategy sets out its future direction including an intention to look at systems and pathways as they assess quality of care, alongside NHS England and NHS Improvement's developing its system oversight framework, both NHS England and NHS Improvement and CQC will need to coordinate well to avoid duplicating efforts, metrics and assessment tools. Trusts also cite a centrally-driven model of oversight as a driver of this perceived lack of coordination.

Similarly, as ICSs develop and potentially take on more responsibility for performance management and oversight of their component organisations, trusts have pointed to a need for a concurrent reduction in the activity of both regional and national NHS England and NHS Improvement teams, to streamline activity so that these different functions complement each other. Some trusts have proposed, for example, that if ICSs take on accountability for outcomes and delivery across their patch, there should be a reduction in the amount of organisationally focused performance management from NHS England and NHS Improvement, to help manage the amount of activity taking place, avoid duplication between national, regional and ICS oversight, and between NHS England and NHS Improvement and CQC.

Needs to be strategic regulator and has been far too operationally driven from the centre. Also issues of overlap with role of CQC.

Need to avoid duplicating role with CQC, whatever it does and needs to be less directly involved with the operational issues of individual trusts.

There needs to be a more streamlined, joined up processes so providers are not being asked for the same things (but often in different formats) from different bodies e.g. commissioners, ICS, NHS England and NHS Improvement and CQC.