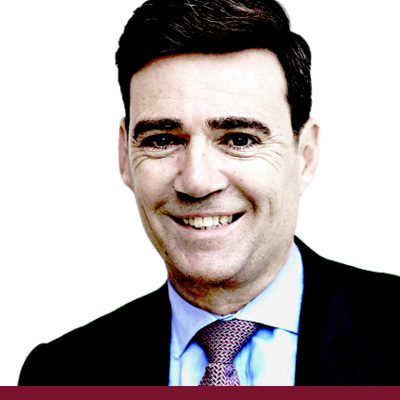 Before being elected mayor of Greater Manchester, Andy was MP for Leigh from 2001. In government, Andy has held ministerial positions at the Home Office, Department of Health and the Treasury. In 2008 he became secretary of state for culture, media and sport, before returning to health as secretary of state in 2009.

My vision for health and social care in Greater Manchester is a whole person service able to deal with the full range of an individual’s physical, mental, emotional and social needs. This should not just be about our offer for older people, it’s an approach which must begin at the start of life.

It’s a social model rather than a medical approach. Let’s start with the person and prevention, before we consider treatment. And we can't deliver that overnight, it's a journey we're on in Greater Manchester.

That said, the benefits of devolution for the health and care system in Greater Manchester are already emerging, even though it’s early days. Things are possible here that just are not possible elsewhere.

In Greater Manchester it is possible to have one conversation with all the players in the same room around health and social care - a chance to get a single vision shared by everyone and to start to pull in the same direction. It remains a constant struggle to reconcile local and national priorities, but it is possible to align national policy makers’ decisions and timeframes with our devolution ('devo') deal.

The skill of Jon Rouse (chief officer, Greater Manchester Health and Social Care Partnership) in leading Greater Manchester in this ‘shared conversation’ is pivotal in offering us a greater ability to make our public services more joined up than anywhere else.

My vision for health and social care in Greater Manchester is a whole person service able to deal with the full range of an individual’s physical, mental, emotional and social needs.

As mayor, school readiness is a key priority for me (based on the findings of the Marmot report received as health secretary). Its conclusions were that if we help people leave formal education with a sense of hope and purpose, we’ve done more than anything else to support them with lifelong good health.

You have to get this right at the very beginning, which is why we’re trying to implement Marmot’s recommendations here in Greater Manchester. If we can get the health and care system, and wider public services, behind the drive to increase readiness for school, the social benefits will soon show.

Last winter we took a different view on the national instruction to cancel elective work. We thought our system was performing slightly better than others, so we didn't cancel all elective operations. It was the right decision for us.

Another example of our collaborative, whole person approach is our drive on homelessness and rough sleeping, levels of which have risen higher everywhere. I do walk-arounds in the city centre and  heard homeless people were struggling to get to see a GP, while being discharged straight from acute care to the streets, with a lack of mental health outreach.

Jon Rouse and the team got to work and we now have a policy that all people can register with a GP even if they’re of no fixed abode - 500 homeless people have already done so. We also have a new policy that means people cannot be discharged early from an acute setting to no fixed abode.

If we can get the health and care system, and wider public services, behind the drive to increase readiness for school, the social benefits will soon show.

These are practical illustrations of how we’re having different conversations about different priorities, working together differently and delivering different results. These are the benefits of devolution.

By contributing to more joined up preventative work, in the end the NHS in Greater Manchester benefits. I think that principle should be extended: every part of England should have same ability to have one conversation

Integrated care and place based working

I have a high degree of confidence in the work being led to develop and implement the integrated care models here. As shadow health secretary a few years ago, I was involved with the local health and care leaders setting out on this journey.

I had conversations with Sir David Dalton (chief executive, Salford Royal NHS Foundation Trust) and Sir Michael Deegan (chief executive, Manchester University NHS Foundation Trust), who, with their community providers and commissioners, have been on this path for a while. You can look back to 2009 when I was health secretary, and in another speech I gave in 2013, that was the first time I referred to the concept of 'whole person care', meaning the full integration of social care and healthcare wrapped around an individual person’s needs and goals.

Back then I was saying that just as we have a National Health Service, we need a ‘National Care Service’, but with devolution in Greater Manchester we’ve actually moved beyond that to develop one integrated service. At that time, I was discussing integration as a national policy approach and working with colleagues here locally to implement it. Events followed our lead, and collaborative working has developed in the right way for us. Privatisation is not on the agenda here, as there is no local support for it.

I have a high degree of confidence in the work being led to develop and implement the integrated care models here. As shadow health secretary a few years ago, I was involved with the local health and care leaders setting out on this journey.

Optimising the money in a fragmented world

I still believe we need legislative reform to enable integrated working to reach the next level. We can change things so far through voluntary, collaborative agreements between local health and care organisations but it will not solve everything. Eventually Parliament must fix the legislation.

I particularly advocate financial reform. Financial incentives in the system as it stands don't support preventative forms of care. Our system underfunds adult social care and overpays hospitals for episodes of care, so funding inevitably gets sucked into acute providers. We need to adapt NHS and social care finances to support more preventative, person-centred care including approaches like the ‘year of care’ – a single payment to a lead local organisation, with incentives for the system to support people preventatively in their own home.

In Greater Manchester we are bringing money together now into single pots in each locality. If we see the total investment in health and care within a local area or local system as one consolidated budget – for social, primary and acute care – we can optimise how funding is deployed and deliver better care.

We’ve also got to pay differently for social care, and get it aligned with the NHS principle: everyone must contribute in some way so that everyone has protection, and is 'covered'. Until the two systems fully speak the same language, we’re integrating talk rather than reality.

We need a structure overseeing the care journey of individuals from home to hospital, giving a single organisation responsibility for oversight and organisation of the patient journey.

I want to see social prescribing as a first port of call, not a fringe add-on. And the NHS’s first thought should often be to refer people for exercise, counselling, talking therapy, and debt advice.

Debt, poverty, housing, relationships and work are often the root causes of poor health in Greater Manchester. We must get to root causes more successfully and find solutions.

Much more becomes possible with the NHS in the room. Other places trying devolution will want to develop alignments between the NHS and their police and crime commissioner. We have that critical mass of aligned local leadership within Greater Manchester. As an example, we are developing joint commissioning approaches across health and justice on liaison and diversion. In addition to helping to integrate health and care services, NHS organisations have a key role to play in supporting a more preventative, longer term approach to wellbeing and in paving the way for wider public service reform.

However, where our approach sometimes falls down is also interesting. We are pioneering place-based working - the Greater Manchester community involves the council, NHS, social care, and the police, but it sometimes falls down at involving the Department for Work and Pensions (DWP), often despite the best endeavours of Jobcentre Plus locally.

I want to see social prescribing as a first port of call, not a fringe add-on. And the NHS’s first thought should often be to refer people for exercise, counselling, talking therapy, and debt advice.

We work much more successfully with the same families and develop solutions together for their challenges. But when we have to phone the DWP, especially around benefits, that’s still the old system and we’re in a queue like anyone else.  We do have a modest DWP budget devolved in the health arena, for a work and health programme called Working Well. For the past four years we’ve been achieving better outcomes than the national work programme managed (nationally the average percentage of similar people achieving work outcomes via the programme was 10-11%, here, it’s 22%) because our approach is more supportive, providing individuals with a key worker and access to talking therapies and broader support. However, we could go much further if the DWP would have the same relationship with us as the NHS does. We have built some good foundations but in a partnership together we could do much more.

The same could be true of education – the more public services we add in, the more we can develop this whole-person approach. It’s not about just care, but about life. The enabler in the current Greater Manchester system is health, the barrier is lack of devolution of DWP and education. We’re addressing school readiness through volunteerism at present, but we could do a lot more big stuff if we were empowered to.

The Westminster gap and the future

Public engagement in the devolution process in Manchester has been important. I came out of Westminster with a really clear sense I would be making a big mistake if I came here replicating the old Westminster/national government way of doing things through yet another additional tier.

This is a big opportunity to bring power closer to people through devolution, get people to take the power than hand it to them.

We’re working together to try to build the new politics here. All governments, including Labour-led administrations, have tried to run the country through London-centric centralism.

The more public services we add in, the more we can develop this whole-person approach. It’s not about just care, but about life.

But look at where we are now as a divided country. Had Westminster looked after all local places equally, perhaps we would have avoided the outcome of the Brexit referendum by ensuring resentment did not build up in those places which were less well looked after.

For me, devolution is the answer– the world is fragmenting, countries and cities are moving at different paces. The idea of the nation moving at one pace might have gone out with the 20th century.

Westminster needs to be enabling, set a broad policy framework and let people do what works together locally. Government should support more localism. We need to go back to the grass roots for rejuvenation. That’s where I am on my political journey: I'm proud to be a part here in Greater Manchester, in a collective rather than an individual, endeavour.