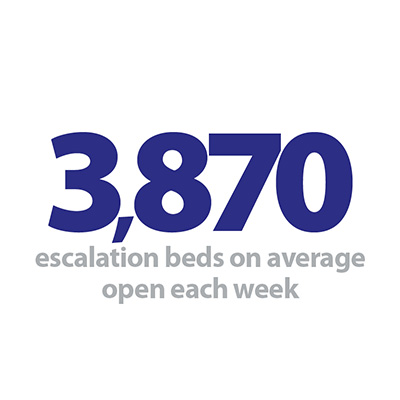 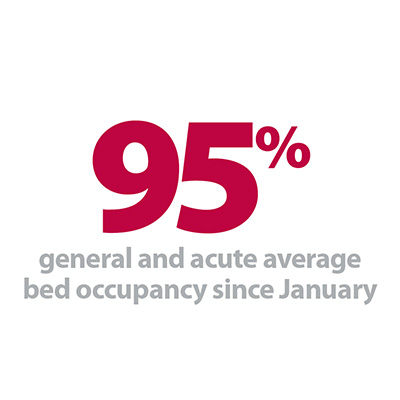 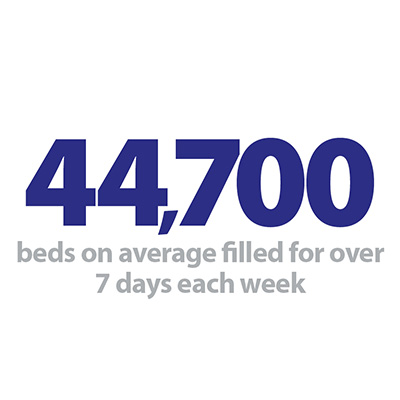 Capacity is a broad term used to describe the capability, in terms of available resources, that the NHS has to deliver services. It is wrong to think of capacity solely in terms of the number of beds available in acute hospitals. Capacity covers all the equipment (including beds for inpatient services) and the range of appropriately qualified staff that are needed to provide care across all health and care settings.

The main obstacle this winter was a lack of capacity, both in and outside of hospital settings. We know that the mismatch between demand and capacity is an issue affecting hospitals but also services in the community, mental health, primary care and social care.

Effective patient flow relies on hospitals and other health and social care settings having capacity, so people can move through the system and be treated in the most appropriate setting. Lots of time and resources go into locating suitable beds, with some patients having to travel to hospitals further away from home to get an available bed.

The main obstacle this winter was a lack of capacity, both in and outside of hospital settings.

Bed occupancy was above the recommended safe level of 85% for the whole of winter; sitting over 95% consistently since the New Year.

This means the NHS had little room for manoeuvre in responding to peaks in demand through seasonal pressures. This year we experienced the worst flu seasons for seven years, as well as high rates of norovirus. This resulted in 5,000 beds a day being used to care for people with these conditions- the equivalent of 10 acute hospitals (NHS England, 2018).

Some beds are closed over winter to prevent further outbreaks of contagious illnesses, which also impacts on available capacity to admit new patients.  On average there were 813 beds closed each week due to diarrhoea and vomiting or norovirus. But on one week alone in December, the NHS had 1,123 beds closed.

To cope with the extra demand the NHS opened escalation beds. On average, there were 3,870 escalation beds open each week this winter – the equivalent of nearly 8 acute hospitals.

The extent of the use of escalation beds shows that the NHS did all it could to maximise capacity over winter. However, there is only so far you can stretch existing resources, for example, by adding additional beds to wards, as many trusts reported they simply did not have enough staff or space to expand capacity any further.

We finished winter with 23% more escalation beds open and over 20% more beds closed than at the same time last year.  We know that the NHS running out of beds each winter is a persistent problem and despite opening a greater number of escalation beds, the total number of beds available to patients was lower than last year.

We know that the NHS now has fewer acute beds per person than almost any comparable system. Furthermore, many of the blueprints for sustainability transformation partnerships (STPs) included significant reductions in bedd capacity (The King’s Fund, 2017).

However, the general consensus is that there are not enough available beds to meet the current levels of demand. Official estimates suggest that the NHS needs around 4,000 more beds (HSJ, 2018) and we have suggested that as many as 10,000-15,000 beds might be needed.

We also need to take a more holistic view of capacity, not just inpatient capacity, but the beds and community care required outside hospital.

One key change we’ve seen this year, particularly when we declared OPEL 4 after New Year, is the support of partners. When we raised serious concerns about our ability to cope, the community helped with more beds, social care ensured no delays, and acute partners offered support. This camaraderie in the face of the challenges we all face makes a huge difference.

Despite recent gains made through a reduction in the number of patients waiting in hospital to be discharged to other settings, in particular, in social care; timely discharge still remained a problem over winter.

The flu outbreak resulted in many more patients than normal being admitted into hospital, many which were critically ill, which then had a knock on effect on the number of patients needing critical care beds. The mortality rate from flu was also significantly higher than in previous years.

Inpatient bed capacity and length of stay is symptomatic of wider pressures across the whole health and care system. This winter the prevalent lack of capacity up and down the country has been the underlying issue which presented itself in longer handover delays, falling performance against the A&E target and people staying in hospital longer than they should because they can’t be discharged.

The advanced nurse practitioners worked different hours in the acute medical unit so they could cover evenings and the weekend, and bed space was set aside during daytime hours to enable them to assess patients with more confidentiality and dignity. It was agreed to continue this way of working into the future.