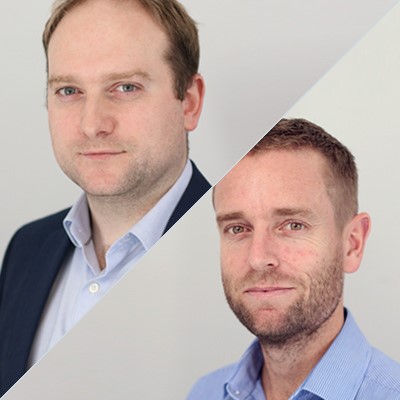 A lack of racial diversity on boards within the NHS has been evident for many years. In his influential 2014 report The snowy white peaks of the NHS, Roger Kline highlighted significant underrepresentation of Black, Asian and Minority ethnic (BAME) staff on trust boards in London and on the boards of national NHS bodies. Kline’s work demonstrated a lack of progress on board diversity in the ten years since the Department of Health and Social Care’s race equality action plan (2004), which itself called for senior leaders in the NHS to develop personal ‘stretch’ targets for race equality while saying the NHS and Department of Health would "target recruitment and development opportunities at people from different ethnic groups whose skills are often underused".

Six years since snowy white peaks and sixteen years since the action plan, the NHS has seen some, but not nearly enough progress, on racial diversity on boards. Earlier this month, NHS Providers launched our Inclusive leadership series, with an article from Patricia Miller of Dorset County Hospital NHS Foundation Trust, and Raj Jain from the Northern Care Alliance. Patricia and Raj are two of only eight BAME chief executives from the 217 trusts across the country. They called on the NHS to have an honest conversation about racism and they called for leaders to show cultural interest and competence if we are to effectively address racial inequalities for staff and patients.

While acknowledging that data and measurement alone are not enough, Patricia and Raj did highlight their importance in understanding whether we are making progress. This article therefore examines the current picture of BAME representation on trust boards, predominantly utilising data from NHS Providers annual remuneration survey. It uses complementary evidence to show additional information on racial diversity throughout the workforce, while noting some of the key official data on BAME staff experience to illustrate other related effects of racial inequality in the NHS.

Make up of boards

Our most recent remuneration survey showed that in 2019/20, 7.5% of executive directors in trusts were from a BAME background (81 out of 1,077 directors). This is a slightly higher proportion than observed in the previous survey (6.3%), a figure that had remained steady since 2016/17. Similarly, data collected by NHS England as part of the workforce race equality standard (WRES) suggests small steps towards greater representation, with a figure of 7.1% of very senior managers from a BAME background in 2016 rising to 8.4% by 2019. This is still well below the level of representation the NHS is aspiring to, given the overall proportion of the BAME population in England and Wales (14%) and the fact that the NHS is the largest employer of ethnic minority people in the country, with 19.7% of staff overall identifying as BAME (as shown in figure one).

Within the overall picture there is some variation by role, region and type of trust. Medical directors have typically seen higher levels of BAME representation, and in our most recent survey 19.5% were from a BAME background (an increase from 16.1% the previous year). Non-executive directors have also seen higher levels of BAME representation (11.5% in the latest survey). However, there were fewer BAME chief executives (4.9%) and chairs (7.3%), indicating there is still some way to go in the effort to encourage greater diversity at the most senior levels of trust leadership.

Perhaps unsurprisingly, trusts in London have a greater proportion of BAME executive directors (14.9% in our latest survey). Trusts in the North East and Yorkshire also have a relatively high proportion (8.2%), while those in the East of England and the South West trail some way behind (both 3.2%). Interestingly, mental health and learning disability trusts have greater BAME representation within their executive directors (11.1%) than acute trusts (6.0%) and ambulance trusts (5.3%), highlighting the need for specific initiatives to promote progression in different settings. Research from the NHS Confederation found that while some individual trusts have made impressive strides, one in three trusts have entirely white boards. 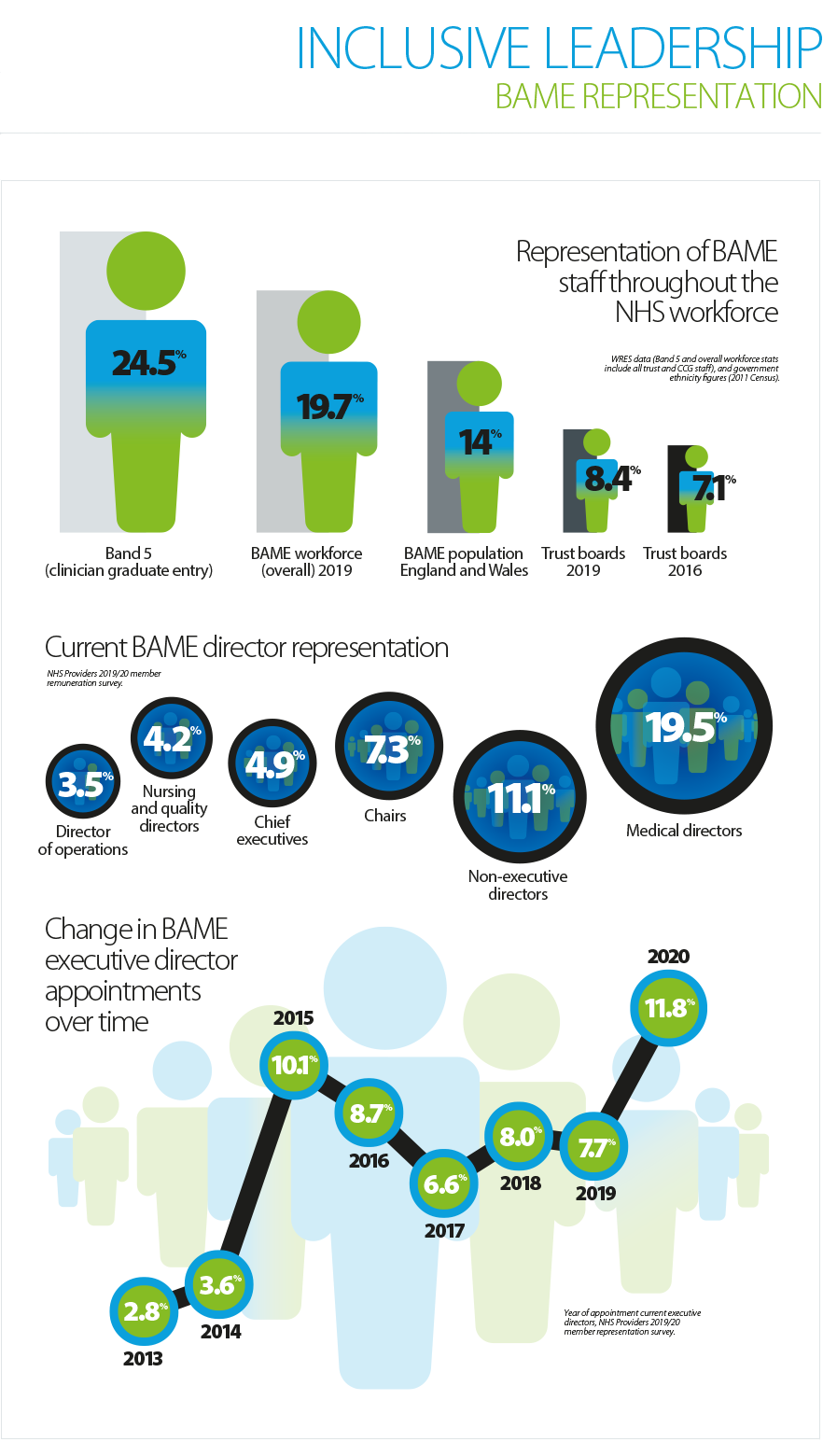 Interestingly, mental health and learning disability trusts have greater BAME representation within their executive directors (11.1%) than acute trusts (6.0%) and ambulance trusts (5.3%), highlighting the need for specific initiatives to promote progression in different settings.

Inequalities within the NHS workforce are not only present in the lack of diversity on boards. The NHS has placed a considerable – and correct – emphasis on creating and improving inclusive cultures to ensure a more positive working experience for all BAME staff. We will explore these issues further throughout this series, but it would be short-sighted not to connect the discrimination faced by BAME staff with the poor levels of progression and representation at senior levels.

The NHS staff survey has found that BAME staff have a greater likelihood of experiencing bullying, harassment or abuse in their working lives than white staff. This is the case whether it is coming from patients or members of the public (30.3% of BAME staff experienced this compared to 27.9% of white staff in a 12-month period), or from colleagues and managers (28.4% BAME – 23.6% white). Levels of bullying, harassment and abuse from patients or the public are unsurprisingly higher for clinicians: in 2018, a shocking 40% of BAME nurses had experienced this at least once within a 12 month period.

More than double the proportion of BAME staff have personally experienced discrimination from a manager, team leader, or other colleague(s) (14.5%) compared to white staff (6%), while BAME staff are more likely to enter a disciplinary process in almost two-thirds of trusts (64.5%). However, some of these metrics are improving. In particular, the overall relative likelihood of BAME staff entering disciplinary proceedings has been declining year-on-year, from 56% more likely in 2016 to 22% more likely in 2019. But the NHS needs to do more to address discrimination against BAME staff and this is certainly the case when it comes to unequal promotion and career progression opportunities impacting the diversity of boards.

The NHS Staff Survey shows a 16% gap in perceptions of fairness around career progression/promotion for BAME vs white staff: 71% of BAME staff feel their organisation acts fairly in this area, opposed to 87% of white staff. These findings are borne out by the fact that white staff are considerably more likely to be appointed from a shortlist than a BAME applicant. It is also evident in the steady decline in BAME representation between grades shown in figure one.

Chairs and chief executives underlined the issues in progression between bands at various levels in the workforce in a recent series of roundtable discussions held by NHS Providers. Trust leaders emphasised, for example, difficulty with progression from band 4 for BAME staff who have come into the NHS below graduate level, or from band 6 for BAME staff looking to progress into senior team or organisational leadership roles.

The NHS staff survey has found that BAME staff have a greater likelihood of experiencing bullying, harassment or abuse in their working lives than white staff. This is the case whether it is coming from patients or members of the public (30.3% of BAME staff experienced this compared to 27.9% of white staff in a 12-month period), or from colleagues and managers (28.4% BAME – 23.6% white).

Information provided to us by trusts, and data collected at a national level, does show some gradual progress in BAME representation within leadership positions, and on certain measures of racial discrimination at all levels of the workforce. But there are still a number of areas where progress is slow, or trends are going in the wrong direction and it remains the case that only eight trust chief executives are from a BAME background.

In the coming weeks we will explore how these challenges can be met, including through a contribution from Richard Mitchell, Chief Executive of Sherwood Forest Hospitals NHS Foundation Trust, and Navina Evans, incoming Chief Executive of Health Education England, focusing on their past successes and lessons learned in seeking to address racial inequalities. We’ll also examine approaches and initiatives which have shown signs of progress in other sectors and countries and take a broader view of inclusive leadership, including a discussion on the gender pay gap in the NHS.