In the absence of a clear understanding of which circumstances might lead to a tax bill, there is evidence that NHS staff are becoming risk averse about taking on more responsibilities or accepting promotions, as they struggle to predict whether a pay rise may affect their pension. This is coupled with a perception that the incentive to pursue more senior roles is diminished in light of tax arrangements which threaten to eat into the overall reward package of taking on executive posts.

Trust leaders have concerns about the future pipeline of staff to fill vacancies in senior posts, given the impact of pay rises on potential tax liabilities, with 37% of directors saying that fewer staff are seeking or accepting promotions and 60% seeing clinical staff become less willing to take on leadership roles. This is likely to be impacted by the fact that taking on a leadership role now carries the risk of senior clinicians’ forfeiting their eligibility for proposed pension flexibilities, based on the extent to which the role retains 'clinical duties'.

Please note: when talking about 'promotions' to senior roles within the NHS, we are referring to staff moving into specific, different roles at a more senior level – many of which will have been vacant for a period of time – or taking on an additional formal level of responsibility in their organisation(s) attached to their current job. We are not referring to title changes or pay rises negotiated between individuals and their employer, but instead specific leadership positions that are vital to the effective delivery of NHS services. In the case of the following question, these may be at or slightly below board level. 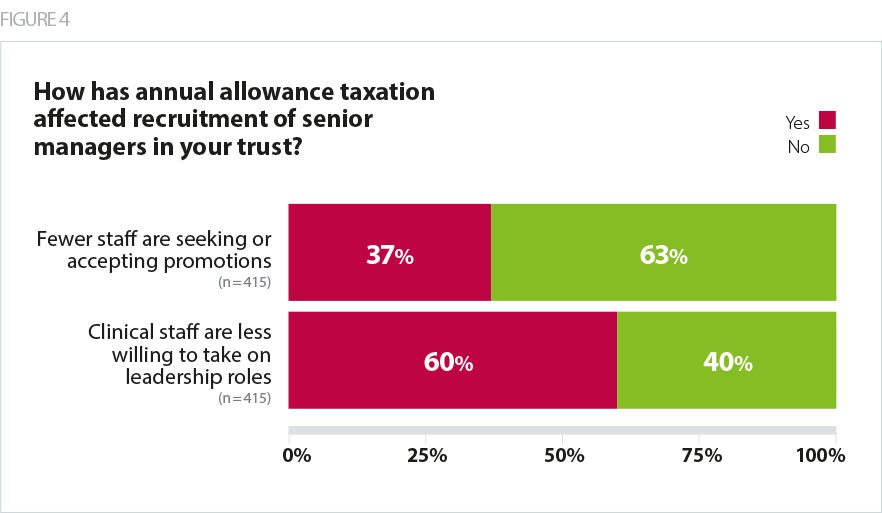 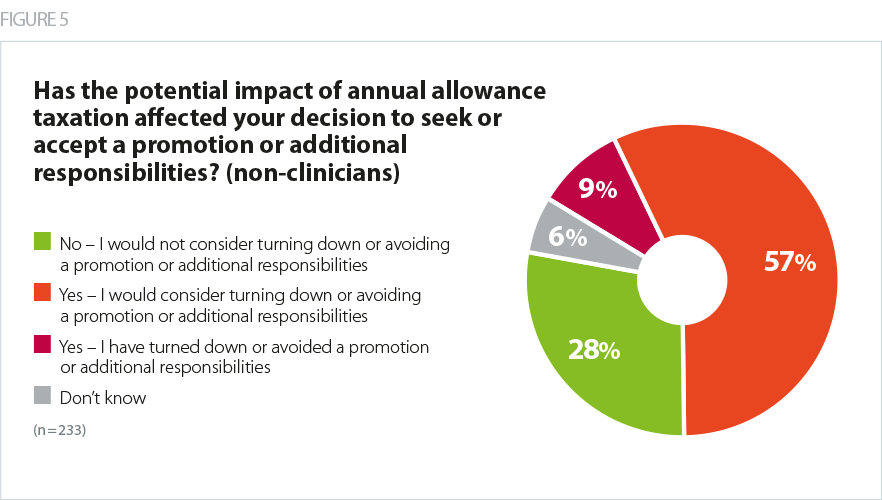 This trend is echoed among clinically qualified respondents, among whom over half (55%) indicated they would consider turning down or avoiding a promotion or additional responsibilities, and 14% said they had actually turned down or avoided a promotion or additional responsibilities. Given policy ambitions to encourage clinical leadership in the NHS in recognition of the skills clinicians bring to leadership roles, this is concerning.

It is worth noting that respondents to this survey comprise existing executive directors, who are already working at the most senior levels in their trust. Comments from some of these respondents however indicate that, had they known the impact of their promotion to VSM level on their pension and tax arrangements, they would not have taken the promotion in the first place.