The effect of the rising cost of living on health inequalities

The vast majority of trust leaders (95%) say that the rising cost of living has either significantly or severely worsened health inequalities in their local area. As rising housing, energy and food costs put more people in the position of making difficult choices about heating or eating, trust leaders expect to see more people pushed into poverty and its health consequences.

There is a wealth of evidence demonstrating the link between deprivation and health, and the long-term impact of inequality on people's mental and physical wellbeing. Long-term conditions including diabetes, heart disease and certain cancers exist at higher rates among the most deprived members of the population, and are exacerbated by the living conditions experienced by the poorest communities.

Trust leaders are particularly concerned that the groups that will endure the greatest impact from the rising cost of living are those who already face unfair differences in health outcomes. This includes the most deprived communities, people from ethnic minority groups, and people with learning disabilities and mental health conditions. People who live in poorly insulated housing or who need to maintain a higher temperature at home due to health conditions, as well as those who will see their real-terms income drop such as those on benefits, are also at risk.

[We are concerned about] elderly people in less affluent communities as we approach winter. Children and families of those in less affluent families, who may miss out on meals, heating and also may not get to health appointments due to transport costs. Those suffering from anxiety/depression will risk exacerbating their condition, leading to increased risk of harm/suicide.

Trusts already report witnessing a rise in demand due to the rising cost of living. The majority (72%) say they have already seen an increase in mental health presentations due to stress, debt and poverty. They also describe an increase in patients experiencing new difficulties in managing existing conditions due to the cost of equipment and medication, and a rise in the prevalence of conditions related to food and fuel poverty.

We anticipate a huge increase in demand due to increased rates of anxiety, depression, domestic violence in the communities served. We are already running at full capacity, amid huge workforce pressures.

Half of trust leaders (51%) agree that they were seeing more safeguarding concerns due to patients' socioeconomic circumstances. One community health trust leader described how the economic environment is impacting the role and function their staff play. Staff now take blankets when they undertake home visits, to wrap patients up if they are very cold, and thermometers so people can monitor when it becomes dangerously cold inside their home. The effects on staff of seeing patients struggling in their homes unable to afford heating or without food in the cupboards should also not be underestimated.

Effect of the cost of living on how people access services 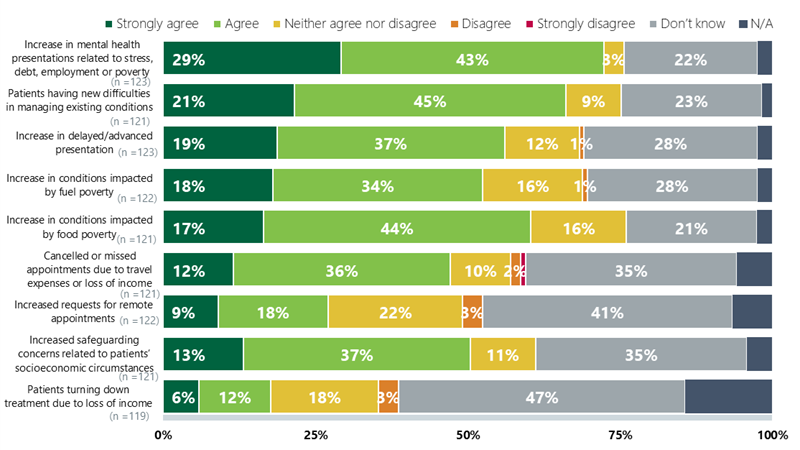