Variation in levels of development and progression

Trust boards play a critical role in driving change on race equality and health inequalities both within their organisation as well as contributing to wider system efforts. Success on both fronts requires confident and compassionate leadership. However, trusts are at different stages of rising to this challenge, and our survey found that boards' response to addressing health inequalities varies substantially between trusts and sectors.

Just under half of respondents (45%) said that their trust board's response to addressing health inequalities is developed (3% very well developed, 42% fairly well developed) (Figure 1). This finding paints a clear picture of the scale of the task ahead: while many trusts have committed to tackling health inequalities and are developing their approach, only 3% said they have a focused and long-standing response to tackling this issue with evidence of impact, and that they are embedded in ICS-led efforts (Figure 2). 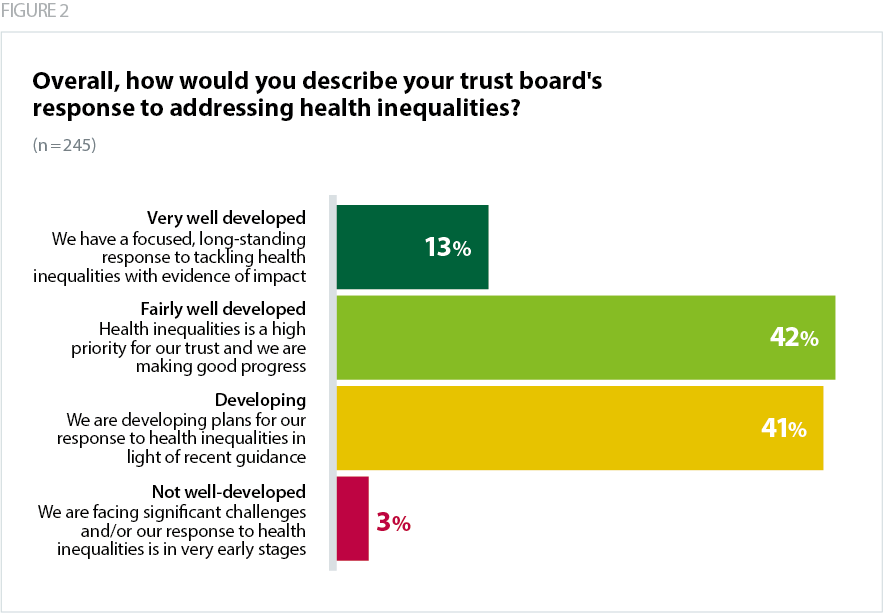 [Health inequalities] is an issue that wasn't on [our] trust’s agenda until last year.

Reducing health inequalities is a key part of the trust board's priorities with updates produced at each board meeting.

This variation may also be influenced by the geographical, operational and socioeconomic context trusts operate within, which varies greatly across the country. While some trusts are based in rural or coastal regions that may be geographically large and socioeconomically diverse, others operate primarily within dense urban areas, serving ethnically diverse populations or communities facing higher levels of poverty and deprivation. Others still will be working across relatively affluent areas, with pockets of deprivation that need a targeted approach. This highlights the level of variation in context and differences in the scale and breadth of the challenges facing trust boards.

The survey identified sectoral differences in how developed boards' response to health inequalities are. Community trusts, and combined community and mental health and learning disability trusts, were more likely than average to describe their board's response to health inequalities as very well developed or fairly well developed (63% and 57% respectively). Ambulance trusts and acute trusts described a lower overall level of development (14% and 17% respectively). 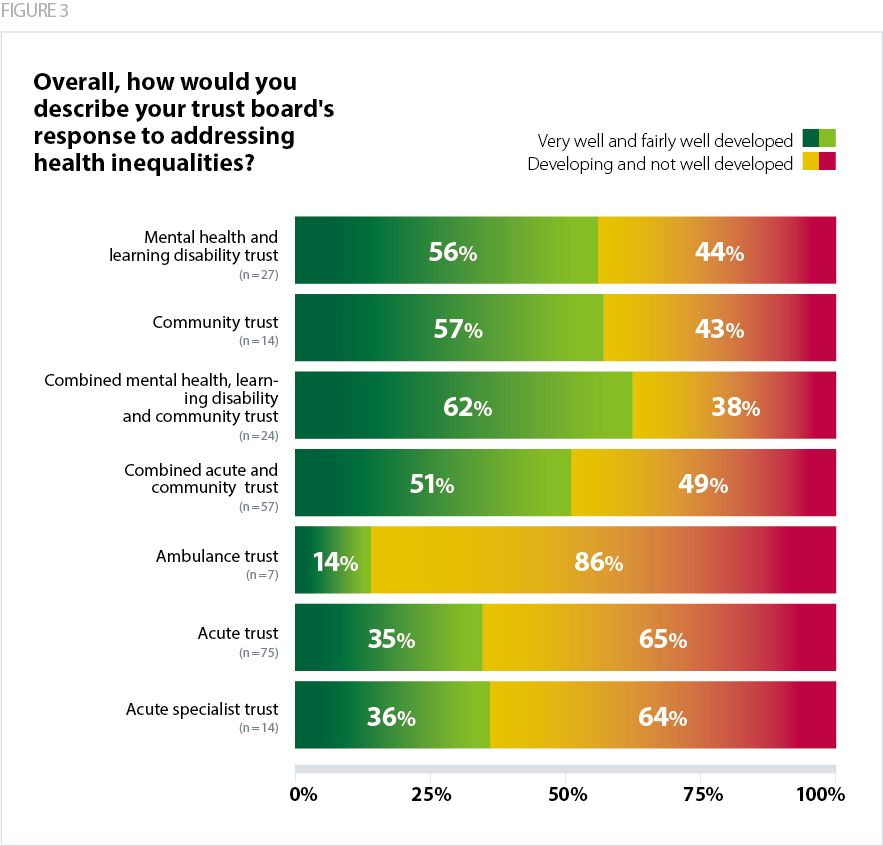 Trusts' response to health inequalities is also informed by the types of services they provide, and the subsequent relationship they may hold with their community. For example, community and mental health trusts often deliver services in or close to people's homes, and therefore come face to face with the inequalities faced by the populations they serve. Mental health trusts in particular have described how people living with mental health conditions are already at risk of health inequalities, and understanding and addressing this has long formed an important pillar of person-centred mental healthcare.

Similarly, the nature of ambulance services means they also see the impact of health and social inequalities among many parts of the community. This includes going into people’s homes and seeing patients within their home context, where issues such as fuel and food poverty, housing disrepair, or social isolation may become apparent. They are often the first port of call for people who may struggle to access services like primary care or social services via traditional routes.

However, they described a lower level of development in their overall response to health inequalities, which could be partly attributed to a need to better define the opportunities for ambulance trusts to contribute tackling health inequalities, including how they can become better embedded into conversations at the level of system and place. Many have described the challenges of having their role in preventative, anticipatory care understood by system partners, and are keen to play an integral role in contributing their understanding of the needs of their patients to wider conversations about improving health and wellbeing and reducing inequalities.

Trusts from all sectors have unique opportunities and challenges in addressing health inequalities within the areas they serve and as a result of the operating context they face. However, this may be particularly challenging for trusts that work across large geographical regions as they will span multiple ICSs, each with their own priorities, forums for discussing health inequalities, and approaches to reducing them. This corroborates the importance of defining how trusts will work with system partners to address the wider determinants of health, including how trusts from different sectors can add value to a system-wide conversation about reducing inequalities for the populations they serve.