It has been five years since the special measures regime was introduced. Ella Jackson, policy advisor (regulation) and Rhiannon Edge, senior research analyst at NHS Providers, explore the improvements that the regime has delivered and whether we need to move to a system based approach as health and care seek to work more closely together.

In the five years since the special measures regime was first introduced the national policy picture has changed almost unrecognisably. So it feels right to now look back on trusts’ journeys through the regime and consider what we can learn from their experiences. In this blog we also ask whether we need to move away from a trust-focused approach to one that takes a broader system view to driving improvement.

The special measures regime was initially established to identify improvements and support trusts where serious failings in the quality of care were evident. However, more recently the regime has evolved with the introduction of financial special measures in July 2016, as part of a national reset of NHS Improvement’s approach to improve the financial performance of trusts struggling with unsustainable deficits.

What does the data show us?

Trends over the last five years

Their journeys have varied widely. While some trusts have exited special measures after a year of improvement interventions and targeted support, others have remained there for over four years.

Acute providers are disproportionately represented among trusts placed in special measures over the last five years. Between 2013 and 2018, 93% of the trusts that have been through the regime are acute trusts (trusts delivering acute services represent around two thirds (66%) of all trusts in England), 5% are ambulance trusts and 2% are mental health trusts. There is also significant regional variation: trusts in the Midlands and East of England represent almost half (49%) of those placed in quality special measures since 2013, whereas 60% of trusts placed in financial special measures are based in London or the South East of England.

Trusts that have entered special measures over the last five years 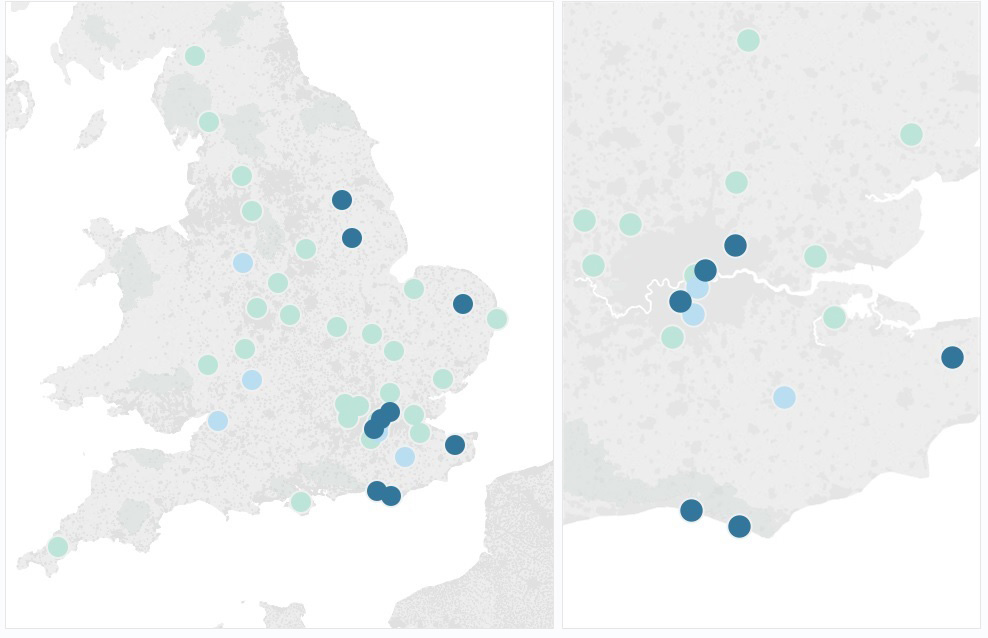 Of the 41 trusts that have been in special measures, only six are now rated as 'good' overall by CQC. The rest are either rated ‘requires improvement’ or are still in special measures following an 'inadequate' CQC rating at their most recent inspection.  Although many trusts have successfully exited special measures and are improving, six trusts have re-entered the regime having previously met the exit criteria.

As of the end of June 2018, there are 20 trusts in special measures - seven for financial reasons, eight for quality reasons and five for both quality and financial reasons. On average, trusts have been under this improvement regime for 17 months. 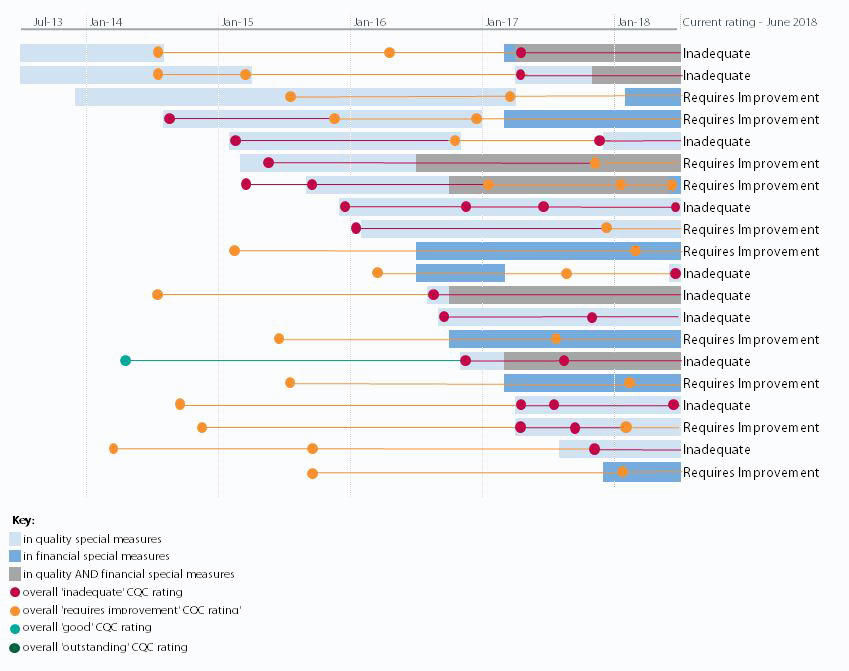 What can we learn from trusts' experiences of special measures?

How effective is the support?

An NHS trust placed in special measures receives a package of support from NHS Improvement, which will also appoint an improvement director. The expectation is that a trust will exit special measures within 12 months. Given that the average length of time spent in special measures is 17 months and that some trusts have come out of special measures only to re-enter at a later date, this suggests it is worth examining the effectiveness of this support.

Also, some trusts have exited one type of special measures, only to be placed in the other. This could show the difficulty of trying to address quality and finance issues in isolation and highlights the importance of making sure that support focused on one area of performance doesn’t negatively impact on others.

From our experience of talking to trust leaders who have been through the special measures regime it’s clear that support is most effective when it is tailored specifically to the trust’s needs and takes account of the improvement priorities staff have identified. It is essential that trusts receive bespoke support which reflects the range of improvement needs, from cultural and relationship challenges to finance and performance. Part of this is having a support from other 'buddy' trusts that have faced similar problems and come out of special measures.

These journeys also demonstrate the challenge of sustaining improvements after exiting special measures, and indicate that a focus on pre-emptively supporting those trusts heading towards special measures could be helpful. The joint NHS Improvement and NHS England Regional Directors, who are expected to have a much closer relationship with trusts in their patch and more say in the special measures regimes, are likely to play an important role here.

From our experience of talking to trust leaders who have been through the special measures regime it’s clear that support is most effective when it is tailored specifically to the trust’s needs and takes account of the improvement priorities staff have identified.

It is important to recognise the impact special measures can have on morale and motivation of staff, who are likely to feel uncertain about the trust’s future and concerned about the reputational impact. Many trusts also struggle to recruit to vacancies after being placed in special measures, which can exacerbate the pressures already felt by staff.

Trust leaders talk of the importance of spending time listening to staff, understanding their concerns, acknowledging the challenges the trust and staff are facing, and being role models for the behaviours, values and vision for the trust. Charting and navigating the future strategic direction for the trust, and supporting staff throughout the process, are considerable leadership challenges.

Many trusts also struggle to recruit to vacancies after being placed in special measures, which can exacerbate the pressures already felt by staff.

In addition to the increased oversight from regulators, trusts in special measures find themselves subject to significantly increased scrutiny from their commissioners, other national bodies, such as Health Education England, and professional regulators. Trust leaders describe being overwhelmed with separate, often duplicative, reporting requests, the consequence of which is that they are left with little time to focus on improvement.

While the national bodies' commitment to supporting improvement is clear, they can inadvertently put hurdles in the way. Developing a more coordinated approach to regulatory and oversight requests within the special measures regime, or giving NHS Improvement the task of providing assurance to other bodies, could be ways of removing these obstacles and allow trusts to focus on their improvement journey.

Trust leaders describe being overwhelmed with separate, often duplicative, reporting requests, the consequence of which is that they are left with little time to focus on improvement.

What role for local system partners?

The special measures regime is founded on the notion that problems lie within individual organisations. However, we know from the evidence about special measures in the education sector that context matters and there is now general agreement that local integration and system working are essential to meeting the challenges facing the health and care system. In fact, CQC’s calls for powers to regulate systems show how mindful national bodies now are of the wider system influences on quality.

Trusts and their local partners are increasingly working together to plan and deliver care, and are taking on greater responsibility for the performance of all organisations within the system. It makes sense then to assume that local system partners will play a greater role in supporting trusts in special measures in their system, and we are already beginning to see examples of this. But this throws up more questions. Do system partners have the resources and capabilities required to take on this role? Will regulators allow system partners 'breathing space' if providing support impacts their own performance?

From the considerable length of time that some trusts have spent in special measures, it is clear that at least some of the problems that led to them being there are beyond the gift of the trust alone to fix. The move to local system accountability could offer an opportunity to tackle some of the most entrenched problems.

The special measures regime is founded on the notion that problems lie within individual organisations. However, we know from the evidence about special measures in the education sector that context matters and there is now general agreement that local integration and system working are essential to meeting the challenges facing the health and care system.

The evidence from trusts' journeys through special measures shows a variety of experiences. Most trusts have maintained or improved on their CQC rating since coming out of special measures, but some have re-entered or stayed in the regime well beyond the length of time expected.

Five years on from the introduction of special measures, it may be time to ask whether a regime which places expectations on individual trusts to overcome incredibly entrenched and substantial challenges – such as workforce or financial challenges affecting a whole health economy – is the most effective approach. The introduction of beefed-up regional teams spanning NHS Improvement and NHS England, and the maturing of local system partnerships through sustainability and transformation partnerships and integrated care systems, offer a chance to consider a more bespoke and comprehensive model to supporting improvement.